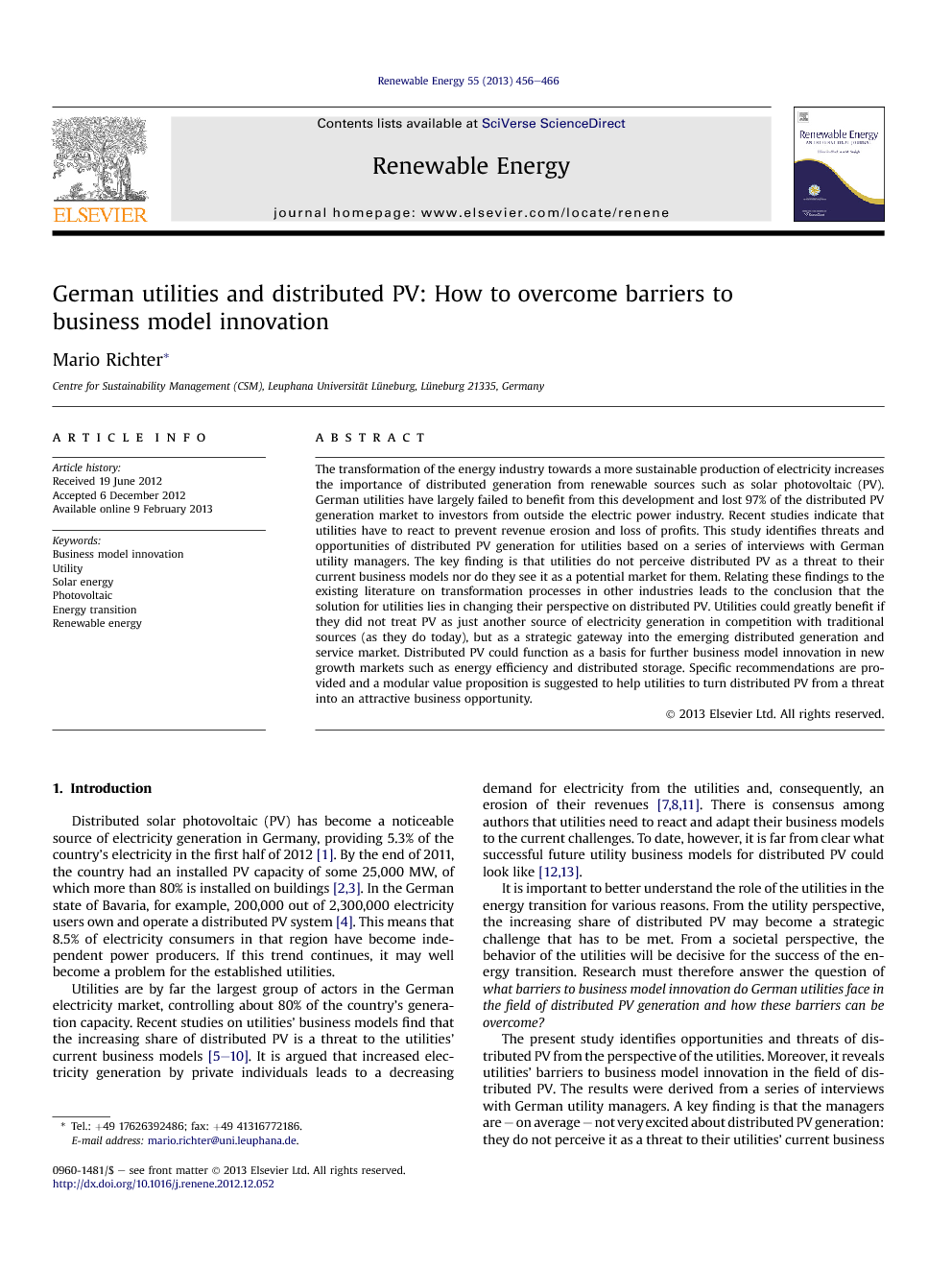 The transformation of the energy industry towards a more sustainable production of electricity increases the importance of distributed generation from renewable sources such as solar photovoltaic (PV). German utilities have largely failed to benefit from this development and lost 97% of the distributed PV generation market to investors from outside the electric power industry. Recent studies indicate that utilities have to react to prevent revenue erosion and loss of profits. This study identifies threats and opportunities of distributed PV generation for utilities based on a series of interviews with German utility managers. The key finding is that utilities do not perceive distributed PV as a threat to their current business models nor do they see it as a potential market for them. Relating these findings to the existing literature on transformation processes in other industries leads to the conclusion that the solution for utilities lies in changing their perspective on distributed PV. Utilities could greatly benefit if they did not treat PV as just another source of electricity generation in competition with traditional sources (as they do today), but as a strategic gateway into the emerging distributed generation and service market. Distributed PV could function as a basis for further business model innovation in new growth markets such as energy efficiency and distributed storage. Specific recommendations are provided and a modular value proposition is suggested to help utilities to turn distributed PV from a threat into an attractive business opportunity.

Distributed solar photovoltaic (PV) has become a noticeable source of electricity generation in Germany, providing 5.3% of the country's electricity in the first half of 2012 [1]. By the end of 2011, the country had an installed PV capacity of some 25,000 MW, of which more than 80% is installed on buildings [2] and [3]. In the German state of Bavaria, for example, 200,000 out of 2,300,000 electricity users own and operate a distributed PV system [4]. This means that 8.5% of electricity consumers in that region have become independent power producers. If this trend continues, it may well become a problem for the established utilities. Utilities are by far the largest group of actors in the German electricity market, controlling about 80% of the country's generation capacity. Recent studies on utilities' business models find that the increasing share of distributed PV is a threat to the utilities' current business models [5], [6], [7], [8], [9] and [10]. It is argued that increased electricity generation by private individuals leads to a decreasing demand for electricity from the utilities and, consequently, an erosion of their revenues [7], [8] and [11]. There is consensus among authors that utilities need to react and adapt their business models to the current challenges. To date, however, it is far from clear what successful future utility business models for distributed PV could look like [12] and [13]. It is important to better understand the role of the utilities in the energy transition for various reasons. From the utility perspective, the increasing share of distributed PV may become a strategic challenge that has to be met. From a societal perspective, the behavior of the utilities will be decisive for the success of the energy transition. Research must therefore answer the question of what barriers to business model innovation do German utilities face in the field of distributed PV generation and how these barriers can be overcome? The present study identifies opportunities and threats of distributed PV from the perspective of the utilities. Moreover, it reveals utilities' barriers to business model innovation in the field of distributed PV. The results were derived from a series of interviews with German utility managers. A key finding is that the managers are – on average – not very excited about distributed PV generation: they do not perceive it as a threat to their utilities' current business model, nor do they see it as a new business opportunity for their companies. This result contradicts the conclusions of recent studies on utilities' business models. It thus raises the question whether researchers are overestimating the importance of distributed PV or whether the utilities are underestimating the threat to their business model. The existing literature on disruptive technologies and transition processes in other industries indicates that neglecting emerging technologies such as PV could harm the utilities in the long run [14] and [15]. The conclusion of this study is that the solution for utilities lies in changing their perspective on distributed PV. Utilities could greatly benefit if they did not treat distributed PV generation as merely another source of electricity generation in competition with traditional sources (as they do today), but as a strategic gateway into the emerging distributed generation and service market. Accordant specific recommendations are provided and a modular value proposition is suggested. The study is organized as follows. Section 2 provides some background to the topic and reviews the different strands of the published literature, thus laying the ground for the analytical and theoretical framework of this study. Section 3 describes the methodology and the data sources. Section 4 displays the results of the in-depth interviews with German utility managers, and discusses them in Section 5. Section 6, finally, gives a brief summary and points out some directions for future research.