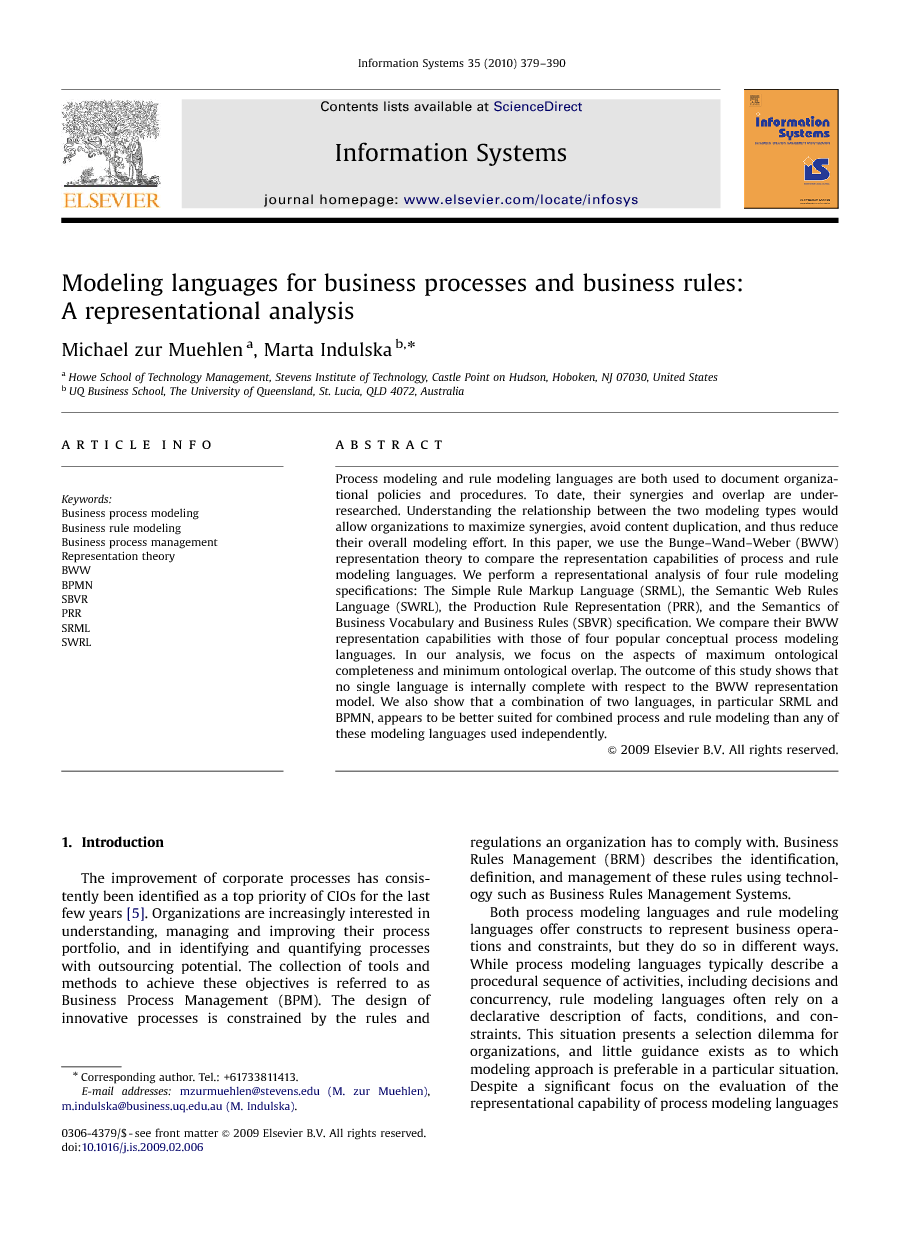 This paper presents the first theory-based analysis of representational capabilities of four rule modeling languages, viz. SRML, SWRL, PRR, and SBVR. The consideration of our analyses, together with existing representational analyses of four popular conceptual process modeling languages, has allowed us to provide some initial direction on which combinations of languages provide users with the best representational capabilities. Our findings show that the combination of BPMN with SRML provides users with the highest representation power while suffering an amount of construct overlap that is no higher than that of other language pairs. However, the analysis also shows that even this combination of languages is still deficient in some constructs, viz. history, conceivable event space, and lawful event space. While our initial findings encourage further investigation of the integration of process and rule modeling languages, there are some known limitations to our current approach. First, different authors performed the analysis of EPC and IDEF3, and their interpretation of the language constructs may differ from ours. Second, the published representational analyses of modeling grammars generally do not include analysis of representational capability of combinations of the modeling grammar constructs, focusing instead on representation of each construct in isolation. Third, we assume that each BWW representation model construct is equally important for the rule modeling domain. In the future, we will conduct an expert study to investigate a more refined ranking of ontological constructs in order to determine the criticality of missing representations for the domain of business rule and process modeling. Fourth, intuitively, some amount of construct overlap is necessary for the purposes of integrating two types of modeling languages. In this paper, we adopt the MOO and MOC theories; however, we recognize that an overlap of at least one construct should exist. Exactly how much overlap is necessary remains an open research question. Finally, the indication of overlap needs to be empirically tested, as is the case with any representational analysis, and the results overall need to compared against a real-world example. Overlap analysis considers overlap at the ontological construct level, hence does not take into account the granularity of representation of the modeling language. For example, two languages might have a construct for representing events; however, they may represent different types of events. Moreover, the use of a language in practice might differ to its specified expected use (potentially due to representational shortcomings such as lack of completeness and clarity of representation), hence the need to identify actual users of the considered languages. Work is currently underway to evaluate additional rule modeling specifications (e.g. RuleML) for inclusion, since more suitable combinations of languages may be identified if more rule languages are included. Further work is also required to develop a cost/benefit calculation that would indicate whether the additional representational capability provided by, for example, SRML over and above BPMN, is worth the complexity and cost of adding an additional language. Last, we see the need for further research that focuses on how to achieve a meaningful and seamless integration of business process and business rule modeling languages. In a related stream of research, work has commenced on the analysis of various extensions to the Petri nets notation in order to determine whether the notation extensions denote a representational improvement with regard to the BWW model.