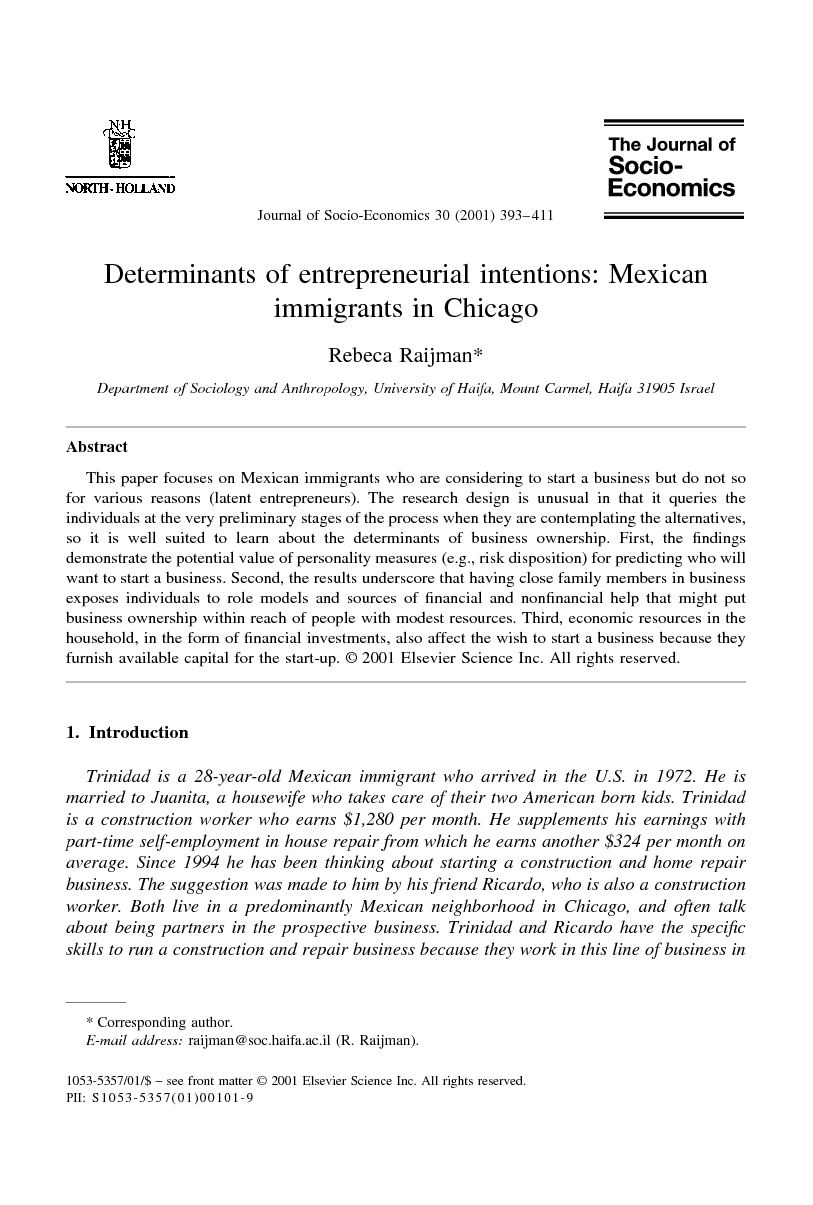 This paper focuses on Mexican immigrants who are considering to start a business but do not so for various reasons (latent entrepreneurs). The research design is unusual in that it queries the individuals at the very preliminary stages of the process when they are contemplating the alternatives, so it is well suited to learn about the determinants of business ownership. First, the findings demonstrate the potential value of personality measures (e.g., risk disposition) for predicting who will want to start a business. Second, the results underscore that having close family members in business exposes individuals to role models and sources of financial and nonfinancial help that might put business ownership within reach of people with modest resources. Third, economic resources in the household, in the form of financial investments, also affect the wish to start a business because they furnish available capital for the start-up.

Trinidad is a 28-year-old Mexican immigrant who arrived in the U.S. in 1972. He is married to Juanita, a housewife who takes care of their two American born kids. Trinidad is a construction worker who earns $1,280 per month. He supplements his earnings with part-time self-employment in house repair from which he earns another $324 per month on average. Since 1994 he has been thinking about starting a construction and home repair business. The suggestion was made to him by his friend Ricardo, who is also a construction worker. Both live in a predominantly Mexican neighborhood in Chicago, and often talk about being partners in the prospective business. Trinidad and Ricardo have the specific skills to run a construction and repair business because they work in this line of business in their main and informal jobs. To realize their idea Trinidad was looking for a location and equipment but had not started the business when we interviewed him. When asked to identify the main barrier to implementation, Trinidad mentions money. He cannot leave his salaried job because he is responsible for his family’s well-being, and it is a risk to leave a stable salaried job before something else is secured. Like the majority of the residents in Little Village, Trinidad does not know about agencies or individuals that could help him. But he is still thinking about it and hopes to start a business in the future. Trinidad’s story is only one among many that exemplify the desire of Mexican immigrants to improve their economic situation in the U.S. by entering the world of small business. Although Trinidad has not succeeded yet in realizing his dream to start a business, he differs from other Mexican immigrants who are not interested in doing so. Trinidad aspires to become an entrepreneur. Becoming an entrepreneur is like setting out for a journey. One must make the decision to go, where to go, and how to get there, before one begins the trip. Many studies of entrepreneurs describe the journey after the trip has begun. The main contribution of the present study is that it provides information about what precedes that journey, namely becoming an entrepreneur. Its aim is to identify a profile of individuals who have the makings of small business owners. Its unique design allows for an exploratory analysis of individuals who, like Trinidad, often think of starting a business but do not do so for various reasons (hereafter this group is also labeled “latent entrepreneurs” to identify them as individuals predisposed to open a business). The research design is unusual in that it queries the individuals at the very preliminary stages of the process when they are contemplating the alternatives, so it is well suited to learn about the determinants of business ownership.1 Research on ethnic entrepreneurship has suggested that because of their low class background, Mexican immigrants in the U.S. represent a wage labor pool destined for blue collar and service jobs in the U.S., not for business ownership (Portes & Bach, 1985). Whether by design or default, Mexicans are said to lack the drive, the resources, and the circumstances considered necessary for becoming entrepreneurs Portes and Manning 1986, Light and Bonacich 1988 and Portes and Zhou 1992. These arguments are primarily based on available census data that show low rates of self-employment for Mexicans compared with other ethnic groups. However, virtually no documentation exists on the enterprising activities of Mexicans because most studies have focused on groups (e.g., Koreans, Cubans, Chinese) whose high visibility in small businesses has been taken as evidence of unique entrepreneurial predispositions Kim 1981, Kim 1987, Portes and Stepick 1985, Light and Bonacich 1988, Min 1988, Engstrom and McCready 1990, Yoon 1991 and Zhou 1992. Findings from a case study on a Mexican community in the city of Chicago challenge these assertions in several grounds. Entrepreneurial activity is quite prevalent in that community, reflected in the number of businesses operating in the neighborhood and also in the number of individuals involved in informal self-employment. The invisibility of Mexican self-employment based on conventional census data stems from the inability of current reporting categories to capture a variety of informal activities (such as street vending, house repairs and child care services) that figure prominently in the income packaging strategies of immigrant families (Raijman 1996 and Tienda and Raijman 2000, forthcoming). As stated, this paper focuses on the subpopulation of Mexican immigrants who aspire to become business owners, and it has two purposes: (1) from an academic perspective, it reveals the factors that influence the process of entrepreneurship in its formative stage; and (2) from a public policy perspective it assesses the potential for self-employment in the community and the obstacles potential entrepreneurs face in starting or trying to start a business. The latter objective has implications for government and community interventions to assist those who already own a business and individuals who have the desire and the skills to become self-employed or business owners. After discussing the relevant literature, and describing the setting, research design, and sample characteristics, in the following we: (1) present a socio-economic profile of latent entrepreneurs (respondents entrepreneurially disposed) which we compare with that of respondents defined as not entrepreneurially predisposed to start a business, and (2) discuss the determinants of entrepreneurial intentions (latent entrepreneurship) in order to identify the factors that predict predisposition to start a business.

Becoming an entrepreneur is like setting out on a long journey. We have documented some events and circumstances that precede this journey, especially regarding those who have not yet started out. Several important lessons can be learned from the analysis. First, the study shows that the level of latent self-employment in the community was relatively high. Half the Mexican population in Little Village aspired to starting a business. Of those who had thought about starting a business, one-third took some steps to realize their dream of business ownership. This is important from a policy perspective, given the neglect of researching the Mexican population in the area of entrepreneurship. Second, the findings demonstrate the potential value of attitudinal measures (e.g., risk disposition) for predicting who will want to start a business. Our results suggest that further development of this approach may be fruitful for understanding the intentions to become self-employed, namely the reintroduction of personality traits. Third, the results also confirm the central role played by social ties linked to business. They underscore having family members in business exposes individuals to role models and sources of financial and nonfinancial help that might put business ownership within reach of people with modest resources. Finally, economic resources in the household, in the form of financial investments, also affect the wish to start a business because they furnish available capital for the start-up. Indeed, personal savings were singled out as the chief source of money for business start-ups. A key question, of course, is not only how potential entrepreneurs differ from the general population, but what are the necessary and sufficient conditions to become an entrepreneur. Although the findings provide some clues to identify predictors of potential beginners in business, our data are not well suited to providing such an answer. A longitudinal design which follows individuals over time is best for understanding the process of becoming an entrepreneur, and future follow-up of respondents in the household survey could shed light on this subject. Finally, two important conclusions follow from the foregoing analysis that have implications for policymakers. First, and not surprisingly, respondents reported that the most common obstacle to starting a business was the lack of financial capital. The fact that (1) no self-help institutions (e.g., rotating credit associations) that provide financial assistance for business start-ups or maintenance were found in the ethnic community, and (2) formal financial organizations -banks- have hard rules for providing money for start-ups,13 suggests that alternative structures may have to be created to provide minority potential entrepreneurs with capital for business start-ups under more flexible terms. Second, although financial capital is a key factor for understanding the likelihood of a business start-up, the lack of social capital is another important barrier faced by potential entrepreneurs. One third of latent entrepreneurs pointed out the need for training, technical assistance, contacts, information, and general guidance. The lack of information and contacts is supported by the fact that the overwhelming majority of latent entrepreneurs (80%) reported not being aware of any organizations that could help them or provide assistance to get started. Thus, imperfect or scarce information is as serious hindrance to business formation as capital constraints (Boulding, 1961). This implies that any policy oriented to encourage business development in the community should take both (financial and nonfinancial) factors into consideration. Because minority firms draw their workforces primarily from the same minority areas where they operate, assistance to open a business could help to alleviate unemployment by creating job opportunities for would-be-entrepreneurs, their families, and the residents of inner cities in general. Aldrich 1975Bourdieu 1977Carland et al 1984Chiswick 1988Granovetter 1985Muller 1993