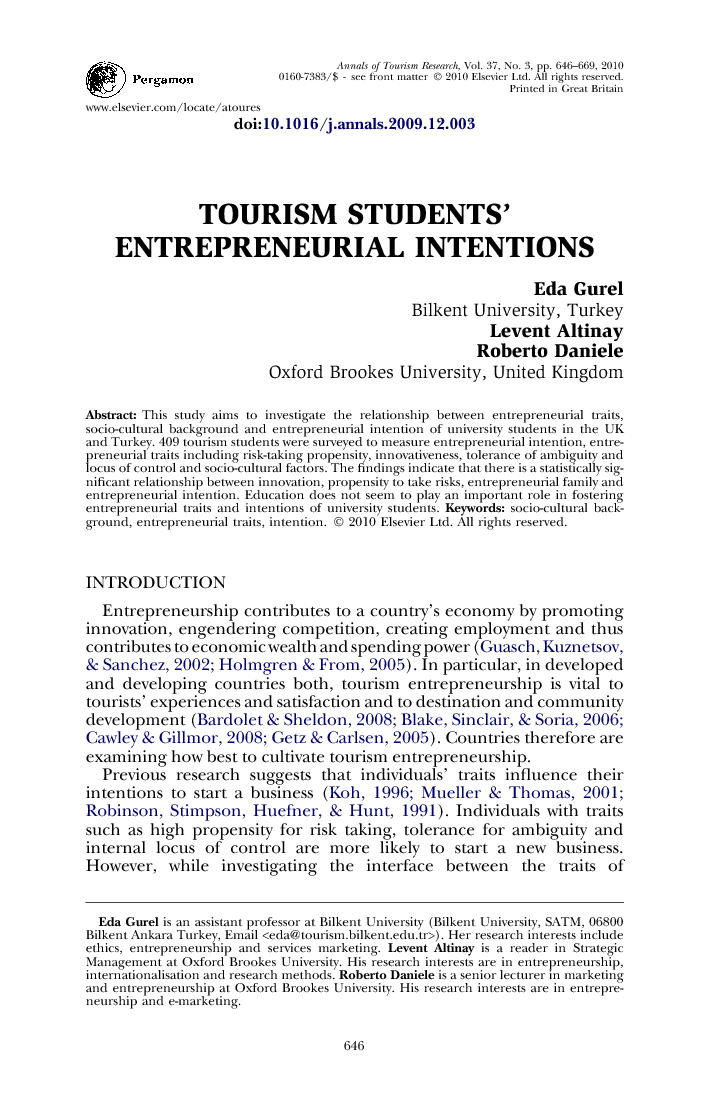 Entrepreneurship contributes to a country’s economy by promoting innovation, engendering competition, creating employment and thus contributes to economic wealth and spending power (Guasch et al., 2002 and Holmgren and From, 2005). In particular, in developed and developing countries both, tourism entrepreneurship is vital to tourists’ experiences and satisfaction and to destination and community development (Bardolet and Sheldon, 2008, Blake et al., 2006, Cawley and Gillmor, 2008 and Getz and Carlsen, 2005). Countries therefore are examining how best to cultivate tourism entrepreneurship. Previous research suggests that individuals’ traits influence their intentions to start a business (Koh, 1996, Mueller and Thomas, 2001 and Robinson et al., 1991). Individuals with traits such as high propensity for risk taking, tolerance for ambiguity and internal locus of control are more likely to start a new business. However, while investigating the interface between the traits of individuals and their intentions, these studies do not consider socio-cultural elements, namely, education, entrepreneurial family background and national culture. Previous studies claim that education influences individuals’ cultural values and thus their level of entrepreneurship (Hayton et al., 2002 and Morrison, 2000). For example, the manner in which people are educated from an early age and the transferable skills which they develop during higher education play a significant role in establishing characteristics generally associated with entrepreneurial behaviour (Casson, 1991 and Ronstadt, 1985). Tourism and hospitality education is still considered very much vocational and action oriented, and many have doubts about the extent to which it prepares students for thinking critically and working outside existing practices and paradigms (Airey and Tribe, 2000 and Echtner, 1995), essential features for fostering entrepreneurship (Kirby, 2005). Although tourism and hospitality management education has come a long way from its origins in on-the-job training to a broad-based liberal curriculum in schools, it is still considered very much vocational and action oriented. Scholars such as Airey and Tribe, 2000 and Ayikoru et al., 2009 question the extent to which traditional tourism and hospitality management education prepares students to think critically outside existing practices and paradigms. Especially in developing countries, Echtner (1995) proposes a ‘three-pronged’ approach to tourism education, which cultivates three types of skills: professional, vocational and entrepreneurial. Echtner points out that the existing types of tourism education programs can be grouped into two basic categories: professional education and vocational skills, and she emphasises the third, largely overlooked component in tourism education: entrepreneurial development. The main objective of professional education is to develop students’ ability to interpret, evaluate and analyse by providing theoretical concepts. The main objective of vocational education, on the other hand, is to teach skills; such content is highly practical. Although the debate on the content and approach to tourism education programs has centred on professional education versus vocational skills, they both are mainly concerned with creating human resources to work for others. However, according to Echtner, the third component creates human resources to work for oneself by developing entrepreneurs. Such an education can tap into an important portion of human resource potential in developing countries by encouraging and cultivating local entrepreneurial tourism development. In fact, one of the most important critical needs of developing counties is to foster not only an environment within which entrepreneurship can flourish, but also entrepreneurs (Echtner, 1995). A family business tradition also influences the entrepreneurial behaviours of individuals (Basu and Goswami, 1999 and Duchesneau and Gartner, 1990). Through working in a family business, people can acquire certain business ideas and skills to start their own or continue their families’ businesses. The tourism industry is dominated by family businesses (Getz & Carlsen, 2005), parents being a potential influential factor on their children’s intention to continue with an existing business or start a new business (Altinay & Altinay, 2006). Similarly, it has been found that national culture plays an influential role on entrepreneurial behaviours (McGrath et al., 1992, Shane, 1993 and Sivakumar and Nakata, 2003). Hofstede (2003, p. 25) defines national culture as “the collective programming of mind which distinguishes the members of one human group from another” and suggests four dimensions—power distance, individualism, masculinity and uncertainty avoidance—to explain differences among individuals from different nations. However, to date, there appears to be a limited number of studies exploring tourism entrepreneurs’ motives, despite the growing importance in responding to crucial tourism agendas such as ethics and sustainability, climate change and global crises (Getz and Carlsen, 2005, Hjalager, 2007 and Russell and Faulkner, 2004). Given the above factors, this paper aims to investigate the entrepreneurial intention of higher education tourism students in the UK and Turkey by considering their traits as well as their socio-cultural backgrounds. More specifically, this research aims to find out, first, the similarities and differences between the entrepreneurial traits of tourism students in the UK and Turkey; second, the influence of different traits—namely, propensity to take risks, internal locus of control, tolerance for ambiguity and students’ innovation—on their intentions to start a business; third, the influence of their socio-cultural backgrounds—namely, family background, education and national culture—on their intentions to start a business and fourth in particular, the moderating effect of education between the entrepreneurial traits and intentions of students. By exploring the above four factors, the study will address a research gap in the area of tourism entrepreneurship by identifying the intentions of tourism students to start a new business. In particular, it will respond to Johnson’s, Simon’s and Wijbenga’s (2006) call for discipline-based research into the effects of higher education on entrepreneurship. Interestingly, although today’s university students make up a significant share of the pool of potential entrepreneurs (Mueller 2004), there appears to be a dearth of studies into tourism students’ intentions to get involved in entrepreneurial endeavours.