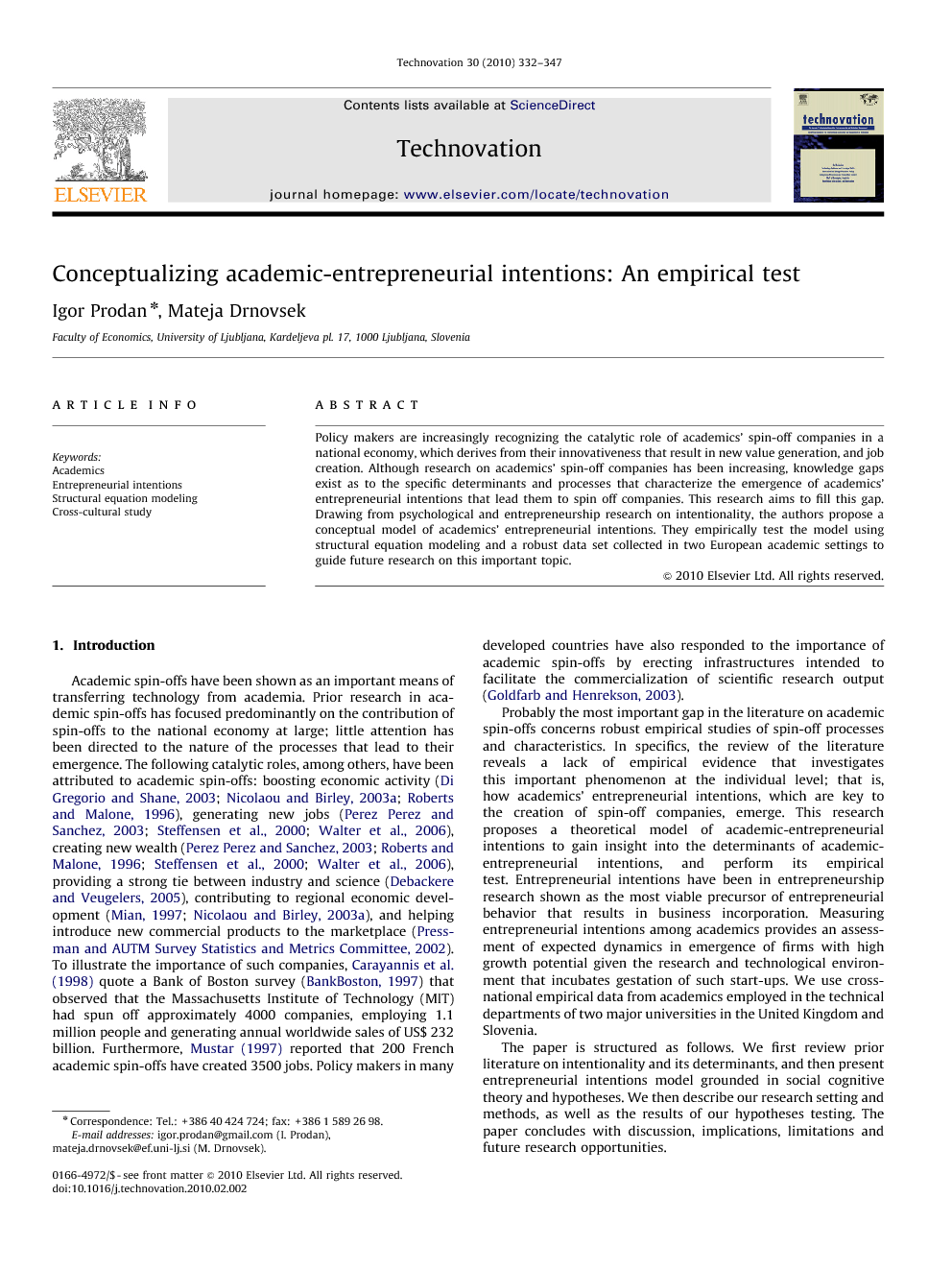 Policy makers are increasingly recognizing the catalytic role of academics’ spin-off companies in a national economy, which derives from their innovativeness that result in new value generation, and job creation. Although research on academics’ spin-off companies has been increasing, knowledge gaps exist as to the specific determinants and processes that characterize the emergence of academics’ entrepreneurial intentions that lead them to spin off companies. This research aims to fill this gap. Drawing from psychological and entrepreneurship research on intentionality, the authors propose a conceptual model of academics’ entrepreneurial intentions. They empirically test the model using structural equation modeling and a robust data set collected in two European academic settings to guide future research on this important topic.

Academic spin-offs have been shown as an important means of transferring technology from academia. Prior research in academic spin-offs has focused predominantly on the contribution of spin-offs to the national economy at large; little attention has been directed to the nature of the processes that lead to their emergence. The following catalytic roles, among others, have been attributed to academic spin-offs: boosting economic activity (Di Gregorio and Shane, 2003; Nicolaou and Birley, 2003a; Roberts and Malone, 1996), generating new jobs (Perez Perez and Sanchez, 2003; Steffensen et al., 2000; Walter et al., 2006), creating new wealth (Perez Perez and Sanchez, 2003; Roberts and Malone, 1996; Steffensen et al., 2000; Walter et al., 2006), providing a strong tie between industry and science (Debackere and Veugelers, 2005), contributing to regional economic development (Mian, 1997; Nicolaou and Birley, 2003a), and helping introduce new commercial products to the marketplace (Pressman and AUTM Survey Statistics and Metrics Committee, 2002). To illustrate the importance of such companies, Carayannis et al. (1998) quote a Bank of Boston survey (BankBoston, 1997) that observed that the Massachusetts Institute of Technology (MIT) had spun off approximately 4000 companies, employing 1.1 million people and generating annual worldwide sales of US$ 232 billion. Furthermore, Mustar (1997) reported that 200 French academic spin-offs have created 3500 jobs. Policy makers in many developed countries have also responded to the importance of academic spin-offs by erecting infrastructures intended to facilitate the commercialization of scientific research output (Goldfarb and Henrekson, 2003). Probably the most important gap in the literature on academic spin-offs concerns robust empirical studies of spin-off processes and characteristics. In specifics, the review of the literature reveals a lack of empirical evidence that investigates this important phenomenon at the individual level; that is, how academics’ entrepreneurial intentions, which are key to the creation of spin-off companies, emerge. This research proposes a theoretical model of academic-entrepreneurial intentions to gain insight into the determinants of academic-entrepreneurial intentions, and perform its empirical test. Entrepreneurial intentions have been in entrepreneurship research shown as the most viable precursor of entrepreneurial behavior that results in business incorporation. Measuring entrepreneurial intentions among academics provides an assessment of expected dynamics in emergence of firms with high growth potential given the research and technological environment that incubates gestation of such start-ups. We use cross-national empirical data from academics employed in the technical departments of two major universities in the United Kingdom and Slovenia. The paper is structured as follows. We first review prior literature on intentionality and its determinants, and then present entrepreneurial intentions model grounded in social cognitive theory and hypotheses. We then describe our research setting and methods, as well as the results of our hypotheses testing. The paper concludes with discussion, implications, limitations and future research opportunities.