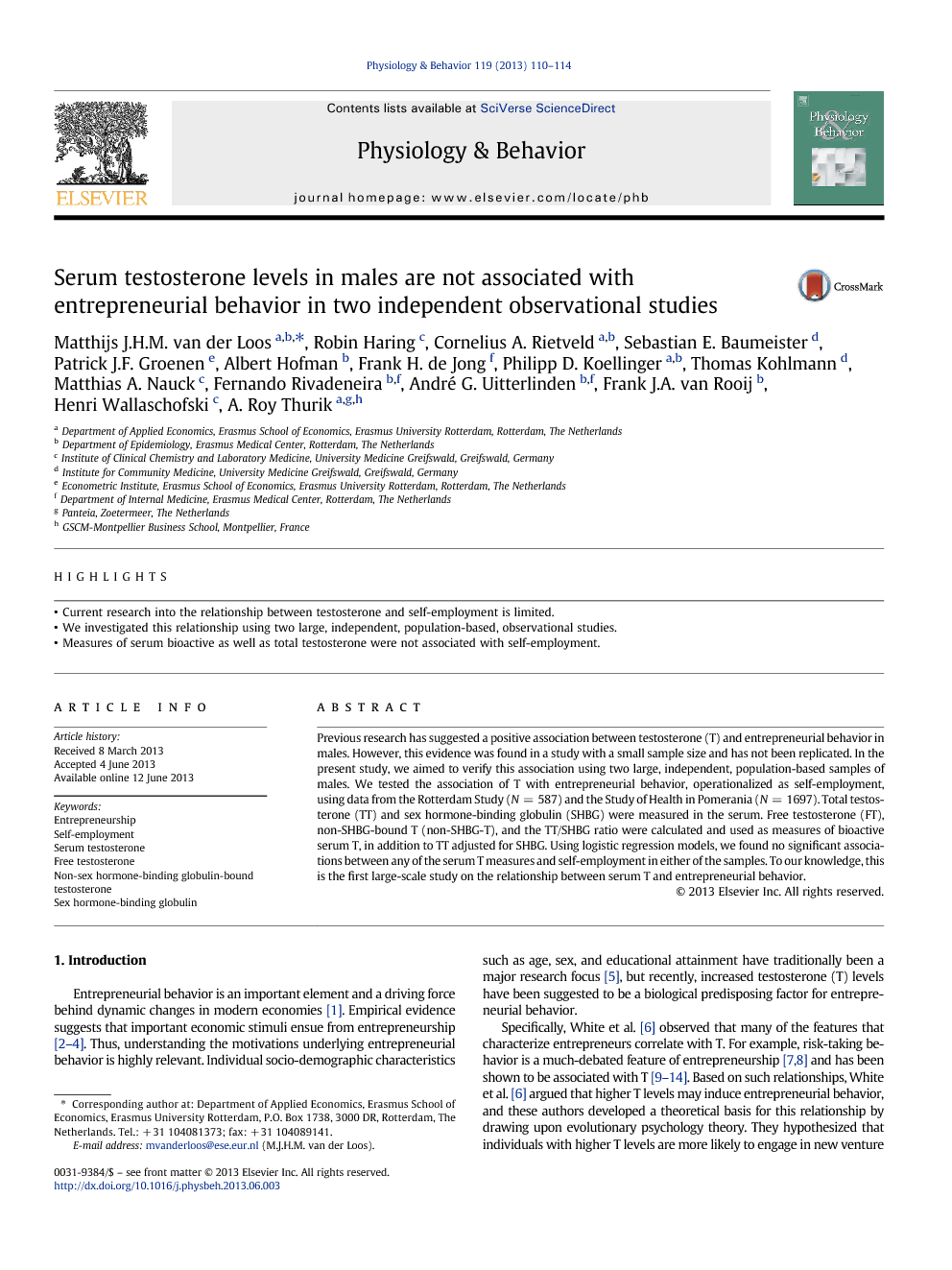 Previous research has suggested a positive association between testosterone (T) and entrepreneurial behavior in males. However, this evidence was found in a study with a small sample size and has not been replicated. In the present study, we aimed to verify this association using two large, independent, population-based samples of males. We tested the association of T with entrepreneurial behavior, operationalized as self-employment, using data from the Rotterdam Study (N = 587) and the Study of Health in Pomerania (N = 1697). Total testosterone (TT) and sex hormone-binding globulin (SHBG) were measured in the serum. Free testosterone (FT), non-SHBG-bound T (non-SHBG-T), and the TT/SHBG ratio were calculated and used as measures of bioactive serum T, in addition to TT adjusted for SHBG. Using logistic regression models, we found no significant associations between any of the serum T measures and self-employment in either of the samples. To our knowledge, this is the first large-scale study on the relationship between serum T and entrepreneurial behavior.

Entrepreneurial behavior is an important element and a driving force behind dynamic changes in modern economies [1]. Empirical evidence suggests that important economic stimuli ensue from entrepreneurship [2], [3] and [4]. Thus, understanding the motivations underlying entrepreneurial behavior is highly relevant. Individual socio-demographic characteristics such as age, sex, and educational attainment have traditionally been a major research focus [5], but recently, increased testosterone (T) levels have been suggested to be a biological predisposing factor for entrepreneurial behavior. Specifically, White et al. [6] observed that many of the features that characterize entrepreneurs correlate with T. For example, risk-taking behavior is a much-debated feature of entrepreneurship [7] and [8] and has been shown to be associated with T [9], [10], [11], [12], [13] and [14]. Based on such relationships, White et al. [6] argued that higher T levels may induce entrepreneurial behavior, and these authors developed a theoretical basis for this relationship by drawing upon evolutionary psychology theory. They hypothesized that individuals with higher T levels are more likely to engage in new venture creation, the authors' measure of entrepreneurship, and that this relationship is partially mediated by an individual's risk propensity. White et al. [6] found evidence for their hypothesis using a salivary T measure in a sample of 110 male North American MBA students. However, this study was limited by a small sample size and has not been replicated. Although there is some evidence to suggest that the 2D:4D digit ratio, a hypothesized proxy for prenatal and adult T levels [15] and [16], and entrepreneurial behavior are associated [17], [18] and [19], there is contradictory evidence about the validity of this digit ratio as a proxy for T (see Ref. [20] for the most recent discussion). The precise role of T in entrepreneurial behavior therefore remains unknown. Thus, the aim of our study was to evaluate the relationship between entrepreneurship, operationalized as self-employment, in a much larger sample of males than previously used. In particular, we utilized two large, independent, population-based samples of males and measured their serum T levels, in contrast to the salivary T measure used by White et al. [6]. In the serum, T is mainly bound to sex hormone-binding globulin (SHBG) and albumin, leaving only a small fraction of T unbound or free. By binding to T, SHBG prohibits T from diffusing from the bloodstream into target tissue cells and performing its biological function. Hence, free testosterone (FT) is generally regarded as bioactive. It is unclear if albumin-bound T is also bioactive [21] and [22]. In our analyses, we used FT and non-SHBG-bound T (albumin-bound and free) as measures of bioactive T, in addition to the total T (TT)/SHBG ratio and TT adjusted for SHBG. Our measures are similar to the salivary T measure used by White et al. [6] because salivary T reflects the part of serum T that is free [23]. For completeness, we also tested for an association between TT and self-employment. Based on previous findings, we hypothesized that there is a positive association between the serum T measures and self-employment.