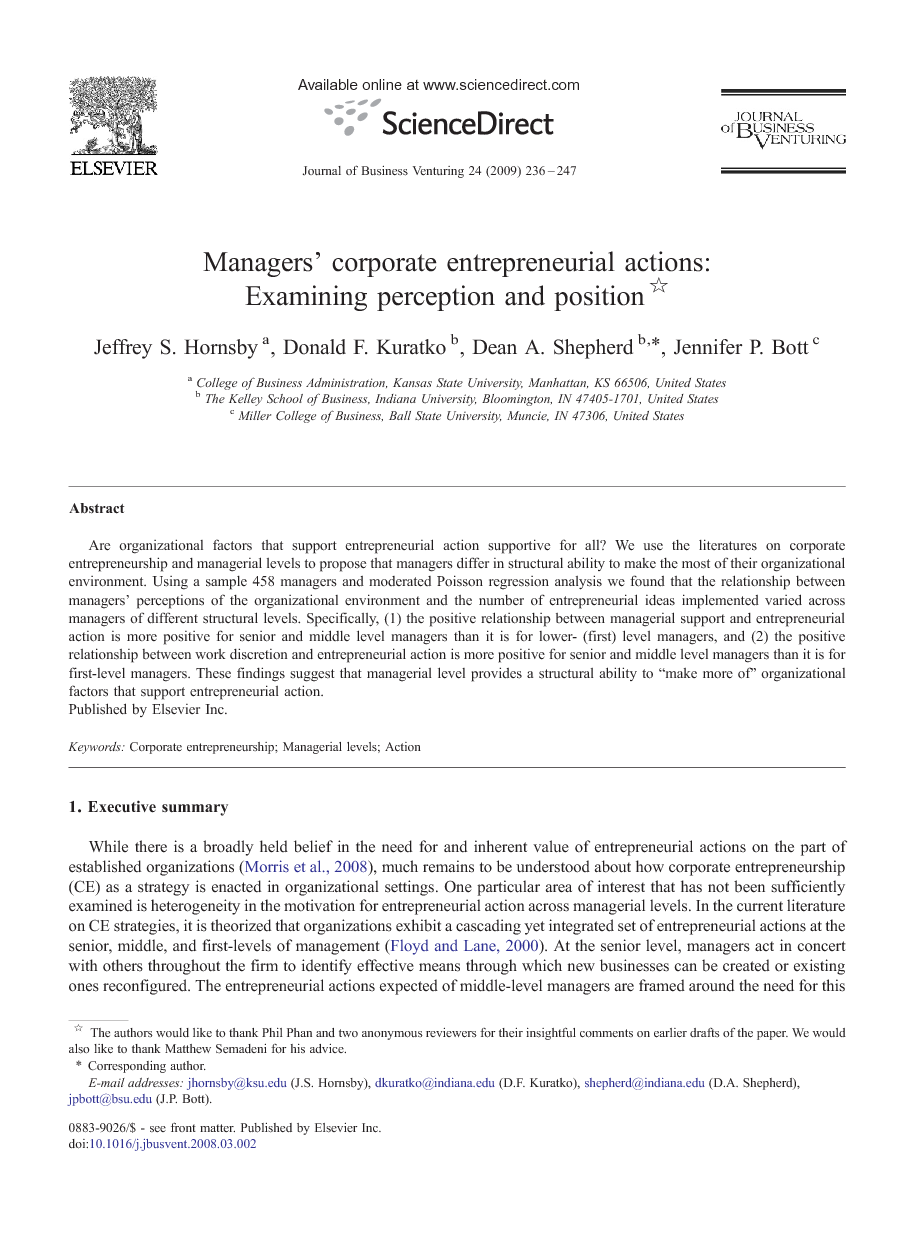 In the 21st Century corporate entrepreneurship (CE) has increasingly been recognized as a legitimate path to high levels of organizational performance (Ireland et al., 2006a, Ireland et al., 2006b and Morris et al., 2008). Although there is a broadly held belief that managers are an important part of this entrepreneurial process (Kuratko et al., 2005a), the CE literature predominantly treats managers as a homogenous group. However, organizational strategy research has acknowledged that managers of different levels have different organizational roles (Floyd and Lane, 2000). Do different managerial levels provide a differential structural ability to capitalize on a supportive organizational environment to act entrepreneurially? By acting entrepreneurially we refer specifically to the number of new ideas implemented (see also Kuratko et al., 2005b). Using a sample 458 managers and moderated Poisson regression analysis we investigated the above research question and found that the relationship between managers' perceptions of the organizational environment and the number of entrepreneurial ideas they implemented varied across managers of different structural levels. This study makes two primary contributions. First, CE research has focused on the factors that promote entrepreneurial action but have relatively ignored the different groups that exist within an organization or have implicitly assumed homogeneity within organizations. We propose and find that managers of different levels have different roles that provide more or less structural ability to implement entrepreneurial ideas. Second, CE strategies have been applied generally to all management levels. Based on our empirical study, it appears that CE strategies need to be more fine-grained focusing on each specific managerial level. Additionally, while not a central focus of this study, the findings related to the empirical validity of the factors of the Corporate Entrepreneurship Assessment Instrument (CEAI) in explaining entrepreneurial outcomes adds to the growing base of research supporting the construct validity of the CEAI scale. Based on these empirical results, this study also has implications for current literature in entrepreneurship. The few studies that have explored managerial level (primarily conceptual studies) have emphasized the role of first-level managers in a “bottom–up” process of CE (Burgelman, 1983a, Burgelman, 1983b and Burgelman, 1984). We offer a counter-weight to this “bottom–up” process with arguments and empirical support for the notion that given a specific organizational environment more senior managers have greater structural ability to “make more of” the conditions and thus implement more entrepreneurial ideas than do first-level managers.