عنوان انگلیسی
The influence of perceived uncertainty on entrepreneurial action in the transition to a low-emission energy infrastructure: The case of biomass combustion in The Netherlands
دانلود فوری مقاله + سفارش ترجمه 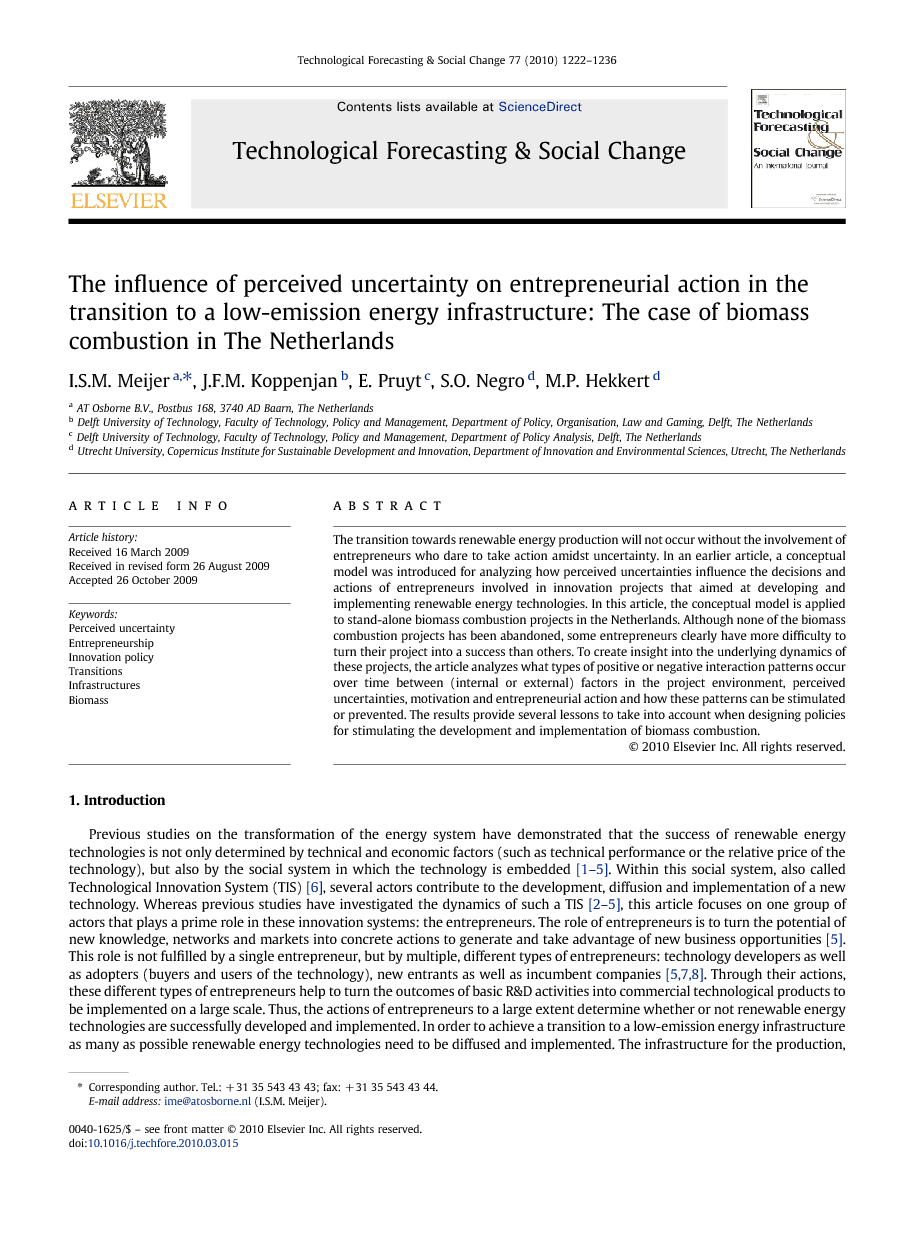 The transition towards renewable energy production will not occur without the involvement of entrepreneurs who dare to take action amidst uncertainty. In an earlier article, a conceptual model was introduced for analyzing how perceived uncertainties influence the decisions and actions of entrepreneurs involved in innovation projects that aimed at developing and implementing renewable energy technologies. In this article, the conceptual model is applied to stand-alone biomass combustion projects in the Netherlands. Although none of the biomass combustion projects has been abandoned, some entrepreneurs clearly have more difficulty to turn their project into a success than others. To create insight into the underlying dynamics of these projects, the article analyzes what types of positive or negative interaction patterns occur over time between (internal or external) factors in the project environment, perceived uncertainties, motivation and entrepreneurial action and how these patterns can be stimulated or prevented. The results provide several lessons to take into account when designing policies for stimulating the development and implementation of biomass combustion.

Previous studies on the transformation of the energy system have demonstrated that the success of renewable energy technologies is not only determined by technical and economic factors (such as technical performance or the relative price of the technology), but also by the social system in which the technology is embedded [1], [2], [3], [4] and [5]. Within this social system, also called Technological Innovation System (TIS) [6], several actors contribute to the development, diffusion and implementation of a new technology. Whereas previous studies have investigated the dynamics of such a TIS [2], [3], [4] and [5], this article focuses on one group of actors that plays a prime role in these innovation systems: the entrepreneurs. The role of entrepreneurs is to turn the potential of new knowledge, networks and markets into concrete actions to generate and take advantage of new business opportunities [5]. This role is not fulfilled by a single entrepreneur, but by multiple, different types of entrepreneurs: technology developers as well as adopters (buyers and users of the technology), new entrants as well as incumbent companies [5], [7] and [8]. Through their actions, these different types of entrepreneurs help to turn the outcomes of basic R&D activities into commercial technological products to be implemented on a large scale. Thus, the actions of entrepreneurs to a large extent determine whether or not renewable energy technologies are successfully developed and implemented. In order to achieve a transition to a low-emission energy infrastructure as many as possible renewable energy technologies need to be diffused and implemented. The infrastructure for the production, transportation and distribution of energy represents an important socio-technical sub-system, implying institutional and socio-cultural changes as well as changes in lifestyle [9]. In this paper we will mainly focus on the first part of the energy infrastructure, i.e. the production of renewable electricity by biomass combustion technology. Therefore, stimulating the breakthrough of renewable energy technologies that contribute to a low-emission energy infrastructure, requires a thorough understanding of the underlying mechanisms that influence entrepreneurial action. In a previous article [1], perceived uncertainty was introduced as a key component influencing the decisions and actions of entrepreneurs. A useful conceptualization for studying uncertainty from the perspective of entrepreneurs comes from Frances Milliken, who defines uncertainty as: “an individual's perceived inability to predict something accurately” [10] (p. 136). The term perception refers to the process by which individuals or organizations organize and evaluate stimuli from the environment. This definition suggests that uncertainty cannot be measured objectively, since it is dependent on the eye of the beholder. In the remainder of this article, the term ‘uncertainty’ refers to ‘perceived uncertainty’. Following McMullen and Shepherd (2006), the argument was made that entrepreneurs will only decide to act if their motivation outweighs the uncertainties he or she expects to encounter. These uncertainties stem from different sources. Uncertainty will not only arise about the technology itself, but also about governmental policy, the availability of resources and the behavior of consumers, competitors and suppliers. Furthermore, it was argued that the decision whether or not to act is constantly reassessed as time goes by. In a case study on the development of biomass gasification projects in the Netherlands, the article illustrated how identifying the dominant sources of uncertainty and analyzing how the balance between perceived uncertainty and motivation changes over time can help us understand why some entrepreneurs decide to stop their activities whereas others continue. The empirical results showed that many entrepreneurial projects were abandoned due to an accumulation of perceived uncertainties and loss of motivation. Negative interactions between different sources of perceived uncertainty and factors in the internal and external project environment (such as changes in the constitution of actors involved, institutional change or external technological developments) appeared to play a crucial role in this. Building upon the insights of the previous article [1], the aim of this article is to deepen our understanding of how perceived uncertainties influence entrepreneurial action. More specifically, this article focuses on the identification of different types of interaction patterns, as this is still a relatively unexplored topic in the literature on uncertainty and entrepreneurial action. The empirical section of this article consists of a case study on stand-alone biomass combustion plants for combined generation of heat and power (CHP) in the Netherlands. Biomass combustion is considered to be an appealing solution in terms of the overall goal of achieving a transition to a low-emission energy production, as it is a relatively simple technology to convert biomass into electricity and heat. Although the electrical efficiencies of biomass combustion are lower compared to other thermo-chemical conversion technologies like gasification or pyrolysis, the main advantage of biomass combustion is that the technology is in a more mature stage of development compared to these other technologies [11], [12] and [13] and that most of the current infrastructure can be used without having to undertake major changes. In contrast to the previous case study on biomass gasification [1], in which almost all projects in the Netherlands were abandoned, the biomass combustion projects are still ongoing. This different outcome of entrepreneurial action makes the biomass combustion case particularly interesting for gaining more insight into the emergence of negative as well as positive interaction patterns. The following research questions are posed: How do perceived uncertainties influence the decisions and actions of entrepreneurs involved in biomass combustion projects in the Netherlands? What types of interaction patterns can be identified between (internal or external) factors in the project environment, perceived uncertainties, motivation and entrepreneurial action? In the next section the theoretical framework on uncertainties will be described in more detail. Section 3 provides insights in the methodology used. In Section 4, the case description can be found. The interaction patterns that influence entrepreneurial action are identified in Section 5. Section 6 concludes by answering the above-mentioned research questions and by providing recommendations on how to accelerate the transition to low-emission energy infrastructure.