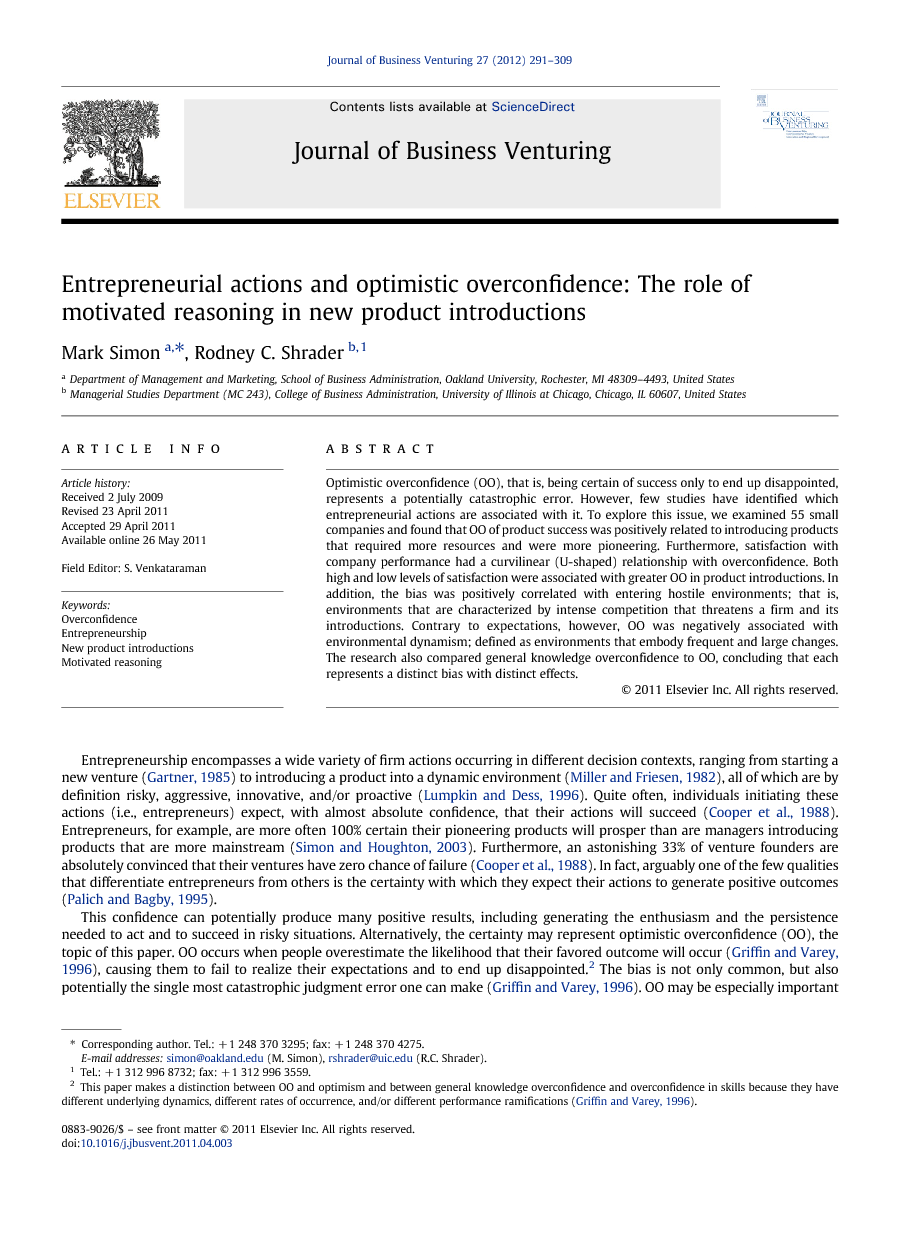 Optimistic overconfidence (OO), that is, being certain of success only to end up disappointed, represents a potentially catastrophic error. However, few studies have identified which entrepreneurial actions are associated with it. To explore this issue, we examined 55 small companies and found that OO of product success was positively related to introducing products that required more resources and were more pioneering. Furthermore, satisfaction with company performance had a curvilinear (U-shaped) relationship with overconfidence. Both high and low levels of satisfaction were associated with greater OO in product introductions. In addition, the bias was positively correlated with entering hostile environments; that is, environments that are characterized by intense competition that threatens a firm and its introductions. Contrary to expectations, however, OO was negatively associated with environmental dynamism; defined as environments that embody frequent and large changes. The research also compared general knowledge overconfidence to OO, concluding that each represents a distinct bias with distinct effects.

The current study examines the relationship between six entrepreneurial actions and overconfidence in predicting product success. Consistent with our hypotheses, we found that the relationship between OO and satisfaction was curvilinear and that overconfidence was positively related to making larger-scale introductions, introducing pioneering products, and entering hostile environments. Contrary to our hypotheses, OO was negatively related to environmental dynamism and was not related to founder status. Initially, it may seem surprising that environmental hostility would increase overconfidence while dynamism would decrease it, especially considering our earlier assertion that both dynamism and hostility decreased introduction performance. It is possible, however, that in small firms, environmental dynamism, unlike environment hostility, does not hinder performance (Srivastava and Lee, 2005). The flexibility of small firms may make them especially suited to adjust to changing conditions in dynamic environments (Lee and Tsang, 2001), while their scarce resources might make it difficult to cope with the fierce competition in hostile environments. To tentatively explore this explanation, we regressed environmental dynamism and hostility against achieving success factors. Consistent with the arguments above, the correlation between dynamism and achieving success factors was positive, although not significant. In contrast, hostility was marginally negatively correlated with achieving success (p = .08). Our analysis did not generate a significant relationship between founder status and OO. This may have occurred because being a founder might lead to a general tendency to be overconfident ( Busenitz and Barney, 1997 and Forbes, 2005), but the general tendency may not manifest in each decision the founder makes, such as choosing to introduce a specific new product. Arguably, the five entrepreneurial actions (e.g., making a large-scale introduction) we tested that generated significant relationships more closely reflected the product introduction decision and our context-specific overconfidence measure. The ramification of overconfidence for firm performance has been largely neglected (Forbes, 2005) but is a crucial subject given entrepreneurs' frequent disappointment with firm performance (Brigham et al., 2007). This study, therefore, contributes to the overconfidence and entrepreneurship literature by utilizing an overconfidence measure that incorporates a product's failure to achieve a success factor. In so doing, we complement Hayward et al.'s (2006) conceptual piece by concurrently empirically examining why an entrepreneur decides to pursue an entrepreneurial initiative and how that process might be associated with a disappointing outcome. Typically, a study only examines one, not both, of these issues. Thus, we advance the literature by helping develop a more integrative theory of entrepreneurship. Of course, disappointment does not automatically mean the firm will fail, and the measure may even have some positive ramifications, such as catalyzing the launch of a new venture. In and of itself, however, it is difficult to view failing to achieve a success factor as a positive. Furthermore, we examine overconfidence when it is potentially most damaging, namely when managers exhibit extremely high levels of optimism (Hmieleski and Baron, 2009). Extreme optimism may lead to conducting inadequate research, over-investing in resources, failing to make needed adjustments (Mahajan, 1992), and having lower performance (Hmieleski and Baron, 2009). In fact, it may be the primary reason for startup failures (Gartner, 2005). In contrast, overconfidence involving moderate optimism may be more likely to lead to positive results (Hmieleski and Baron, 2009). This study also makes an ancillary contribution to the literature on overconfidence by clarifying distinctions between GKO and OO. Drawing distinctions between forms of overconfidence is crucial given Townsend and colleagues' (2010) finding that components of different forms of overconfidence, namely outcome expectations and assessment of one's ability, can affect entrepreneurial actions differently. Following in these footsteps, as one of only two studies to include both GKO and OO, we helped confirm that they were distinct phenomena that were statistically unrelated. We believe this contribution is important, as some scholars (e.g., Houghton et al., 2000) tend to blur this distinction, largely ignoring, for example, that GKO, unlike OO, does not imply optimism or a negative outcome. Our study results also indicate that OO and GKO generate different findings (e.g., Mahajan, 1992, Soll, 1996 and Yates et al., 1998). More specifically, this research tentatively suggests that OO measures may more effectively determine which actions generate overconfidence, and GKO measures may more effectively detect which relatively stable individual differences generate overconfidence. As illustrated by Table 4, our context-specific OO was significantly correlated with the four measures that related directly to the decision to introduce a specific type of new product. In sharp contrast, the GKO measure did not generate any significant relationships with variables reflecting specific actions. Furthermore, our OO measure did not detect a relatively stable individual difference, namely whether or not someone was a venture founder, yet two other studies (Busenitz and Barney, 1997 and Forbes, 2005) that used a GKO measure did. The logic above may help explain why scholars failed to find associations between GKO and identifying a specific entrepreneurial opportunity (Keh et al., 2002), introducing pioneering products (Houghton et al., 2000), perceiving an entrepreneurial initiative to be low-risk (Keh et al., 2002), or deciding to start a specific venture (Simon et al., 2000). The gap between these specific actions (e.g., introducing a pioneering product) and GKO measures (e.g., knowledge about airlines) might be quite large, possibly allowing substantial noise to weaken any relationships between the two. Researchers need to use the type of overconfidence measure most appropriate for their research questions (e.g., Klayman et al., 1999 and Yates et al., 1998).