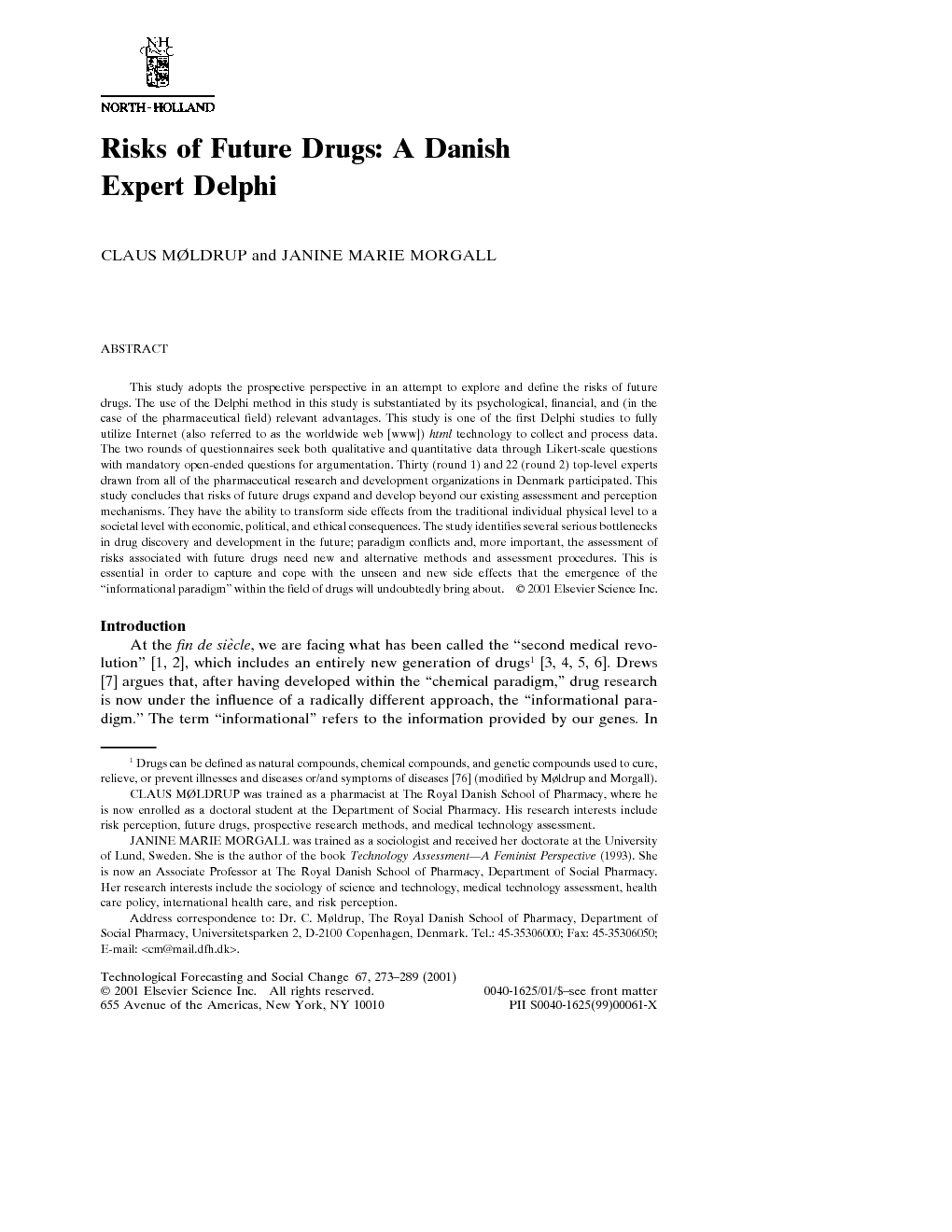 This study adopts the prospective perspective in an attempt to explore and define the risks of future drugs. The use of the Delphi method in this study is substantiated by its psychological, financial, and (in the case of the pharmaceutical field) relevant advantages. This study is one of the first Delphi studies to fully utilize Internet (also referred to as the worldwide web [www]) html technology to collect and process data. The two rounds of questionnaires seek both qualitative and quantitative data through Likert-scale questions with mandatory open-ended questions for argumentation. Thirty (round 1) and 22 (round 2) top-level experts drawn from all of the pharmaceutical research and development organizations in Denmark participated. This study concludes that risks of future drugs expand and develop beyond our existing assessment and perception mechanisms. They have the ability to transform side effects from the traditional individual physical level to a societal level with economic, political, and ethical consequences. The study identifies several serious bottlenecks in drug discovery and development in the future; paradigm conflicts and, more important, the assessment of risks associated with future drugs need new and alternative methods and assessment procedures. This is essential in order to capture and cope with the unseen and new side effects that the emergence of the “informational paradigm” within the field of drugs will undoubtedly bring about.

At the fin de siècle, we are facing what has been called the “second medical revolution” 1 and 2, which includes an entirely new generation of drugs1 3, 4, 5 and 6. Drews [7] argues that, after having developed within the “chemical paradigm,” drug research is now under the influence of a radically different approach, the “informational paradigm.” The term “informational” refers to the information provided by our genes. In that respect, modern drug discovery and development is on a journey that is moving deeper into the secrets of the human being. This journey draws parallels to the “first medical revolution” from nature compounds to the chemical paradigm as primary drug approach. We now know that this “first medical revolution” produced risks: we only have to mention the Thalidomide scandal. As a result, drug discovery and development dramatically changed away from an euphoric belief in chemical structures, once it was learned that chemistry can also cause harm to human beings. Today, the “second medical revolution” may produce new types of risks and harm in the future. We had to learn from our mistakes in the first medical revolution and look deeper into the future of risks. Therefore our concern in this study is with the unseen and new side effects that the emergence of the informational paradigm within the field of drugs will undoubtedly bring about [8].