عنوان انگلیسی
Technological clusters with a knowledge-based principle: evidence from a Delphi investigation in the French case of the life sciences
دانلود فوری مقاله + سفارش ترجمه 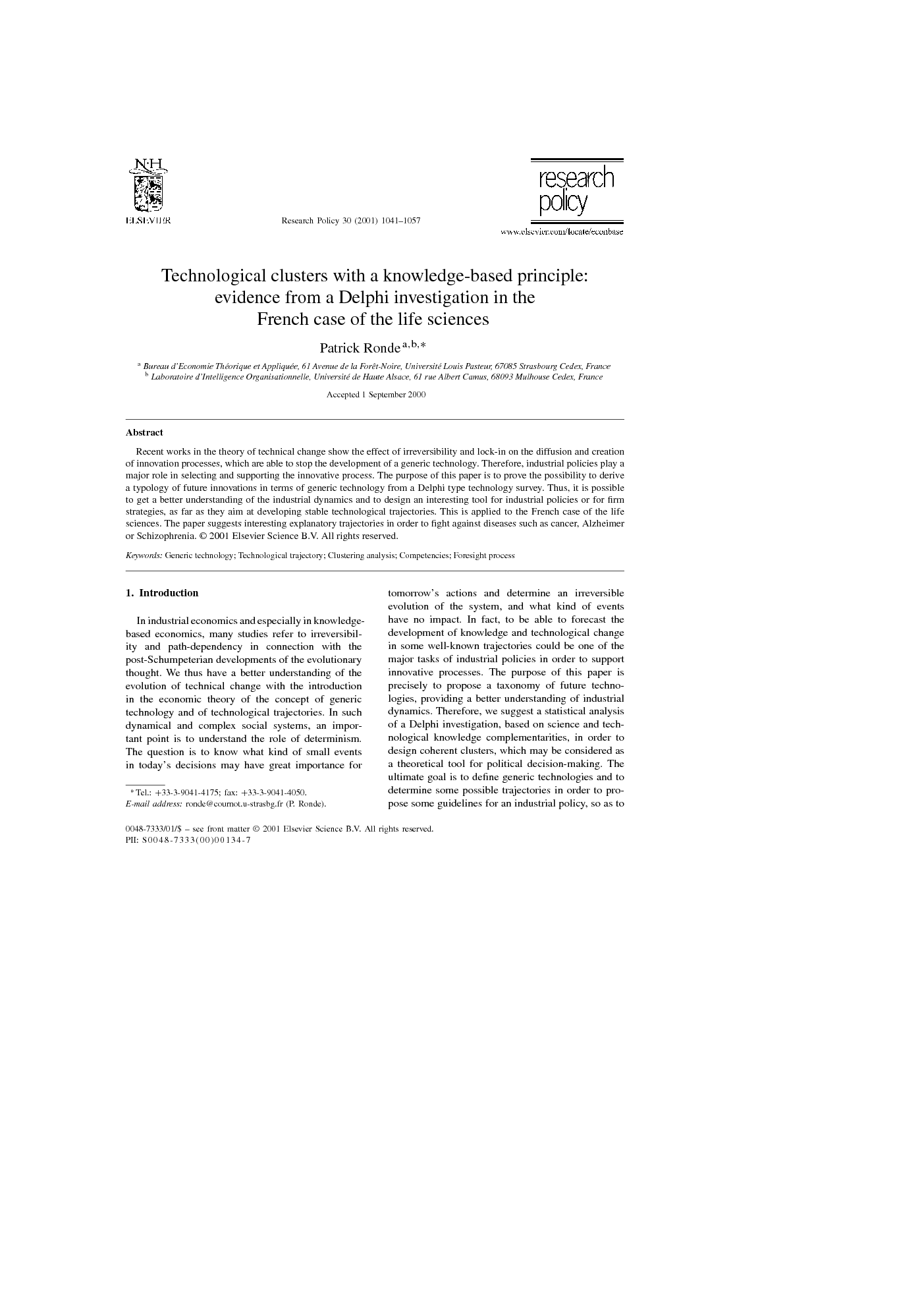 Recent works in the theory of technical change show the effect of irreversibility and lock-in on the diffusion and creation of innovation processes, which are able to stop the development of a generic technology. Therefore, industrial policies play a major role in selecting and supporting the innovative process. The purpose of this paper is to prove the possibility to derive a typology of future innovations in terms of generic technology from a Delphi type technology survey. Thus, it is possible to get a better understanding of the industrial dynamics and to design an interesting tool for industrial policies or for firm strategies, as far as they aim at developing stable technological trajectories. This is applied to the French case of the life sciences. The paper suggests interesting explanatory trajectories in order to fight against diseases such as cancer, Alzheimer or Schizophrenia.

In industrial economics and especially in knowledge-based economics, many studies refer to irreversibility and path-dependency in connection with the post-Schumpeterian developments of the evolutionary thought. We thus have a better understanding of the evolution of technical change with the introduction in the economic theory of the concept of generic technology and of technological trajectories. In such dynamical and complex social systems, an important point is to understand the role of determinism. The question is to know what kind of small events in today’s decisions may have great importance for tomorrow’s actions and determine an irreversible evolution of the system, and what kind of events have no impact. In fact, to be able to forecast the development of knowledge and technological change in some well-known trajectories could be one of the major tasks of industrial policies in order to support innovative processes. The purpose of this paper is precisely to propose a taxonomy of future technologies, providing a better understanding of industrial dynamics. Therefore, we suggest a statistical analysis of a Delphi investigation, based on science and technological knowledge complementarities, in order to design coherent clusters, which may be considered as a theoretical tool for political decision-making. The ultimate goal is to define generic technologies and to determine some possible trajectories in order to propose some guidelines for an industrial policy, so as to avoid bottlenecks, to choose the best possible future as well as the path to arrive there. The paper is organised in the following way. Section 2 develops the theoretical and conceptual settings, while Section 3 presents the data and our methodology of technological clustering. In Section 4 our results are examined and Section 5 gives some conclusions in terms of public policy.

In this paper, we have presented a number of results directly based on data concerning French future innovations. The matrix survey we propose in order to analyse the results of the Delphi investigation allows the construction of a coherent typology of knowledge-based innovation. Certainly, this method of a subjective type remains partial but the large investigation guarantees the objectivity and universality of the information. Furthermore, the analysis has been thought as a preliminary stage aiming to clear some possible futures. Methods of classification offer a first generic technology construction draft. In our view, the main contribution is the identification of several technological clusters based on knowledge relations. More precisely, we have highlighted the base of a generic technology of therapy against cancer. In this cluster, fundamental knowledge linked to molecular mechanisms, more technical know how and more explanatory trajectories such as genetics or biomimetism were recognised. In the same way, other clusters linked to artificial technologies or to the brain were identified. In this latter case the analysis provides also interesting explanatory technological trajectories in order to fight against diseases such as Alzheimer or Schizophrenia. Therefore, by providing a clear and synthetic representation of the different links between technical, technological, scientific topics and those of a know-how order, our analysis appears as an interesting tool for public or private decision-makers. In fact, within the framework of the Resources and Competencies Model initiated by J.B. Barney, our typology is interesting for the external knowledge integration process of the firm: the manager has relevant indications about the future competencies needed to innovate in future trajectories characterised by generic technologies. The next stage consists in orienting the public decision-maker. This can be done while studying cluster periods of realisation, the possible obstacles and the transverse technology survey. As we have specified from the beginning, one objective of the work is to pave the way for more targeted methods of technological foresight and assessment with interviews of experts and construction of scripts for example and therefore our principal guidelines for public intervention are synthesised in Appendix C. Once again, this method is only exploratory and our main conclusions are the following: 1. If the major obstacles to innovation often appear to be of a technical (1) or financial (2) order, there is also a deficit of qualification in the domain of brain, fundamental research and artificial technologies (6) probably due to a lack of researchers. 2.Genetic engineering and new artificial technologies play a specific role in the technological development process, in particular for the emergence of innovative methods against diseases such as cancer, Alzheimer’s or Schizophrenia. 3. Fundamental research in molecular analysis is at the core of the diffusion process of all the technologies linked to life sciences. Finally, our analysis is complementary to the micro-economic analysis of clusters developed by Prevezer and Swann (1994), Bergeron et al. (1998), the statistical view built by Patel and Pavitt (1995) and the institutional box suggested by Carlsson and Stankiewicz (1991). Of course the analysis is more subjective and insofar more open to critism because it deals with the future. But it is also an advantage because public intervention is then able to shape the construction of the techno-industrial clusters. In a way, we thus have a first picture of the French National System of Innovation in life sciences. Certainly, this analysis is only a first step aiming at highlighting some future opportunities. In order to propose more targeted results of technological foresight, one possible improvement of the method consists in combining different kinds of knowledge through the co-operation of the different actors listed by our n×m data matrix. As a matter of fact, for each technological cluster identified it is possible to list the whole sample of experts, knowing one or several topics of those clusters. Therefore, by mapping the different competencies of those experts, the objective could be to develop learning processes in order to have a better view of each of the future trajectories and to detect in which fields consensus already does or does not exist. Thus a potential conflict can be identified in advance. In fact, government activities aimed at assessing technical development and providing opportunities for informal technical exchange try to stimulate communication in so-called “communities” of scientists, engineers and business people (Grupp and Linstone, 1999). Moreover, for each cluster, the primary “communities” could be extended by new methods of co-nomination as it was the case in the British Delphi (Nedeva et al., 1996) or by involving more laypersons and stakeholders as it was the case in the German Delphi in order to experiment discursive approaches ( van den Daele, 1997 and Cuhls, 2000). For example, the co-nomination database provides a means of benchmarking the networks, which existed at the start of the Technology Foresight Programme. The deliberate promotion of knowledge flows within informal circles can contribute an important input to innovation. Hence, in the line of the two main objectives generally attributed to actual foresight processes (identifying generic technologies and promoting knowledge flows), the tool we proposed allows us, under the specific hypothesis of the work, to identify generic technologies and the competencies needed, and to get a first step in order to stimulate knowledge flows in some well-known groups of experts, working on some well-known technological trajectories.