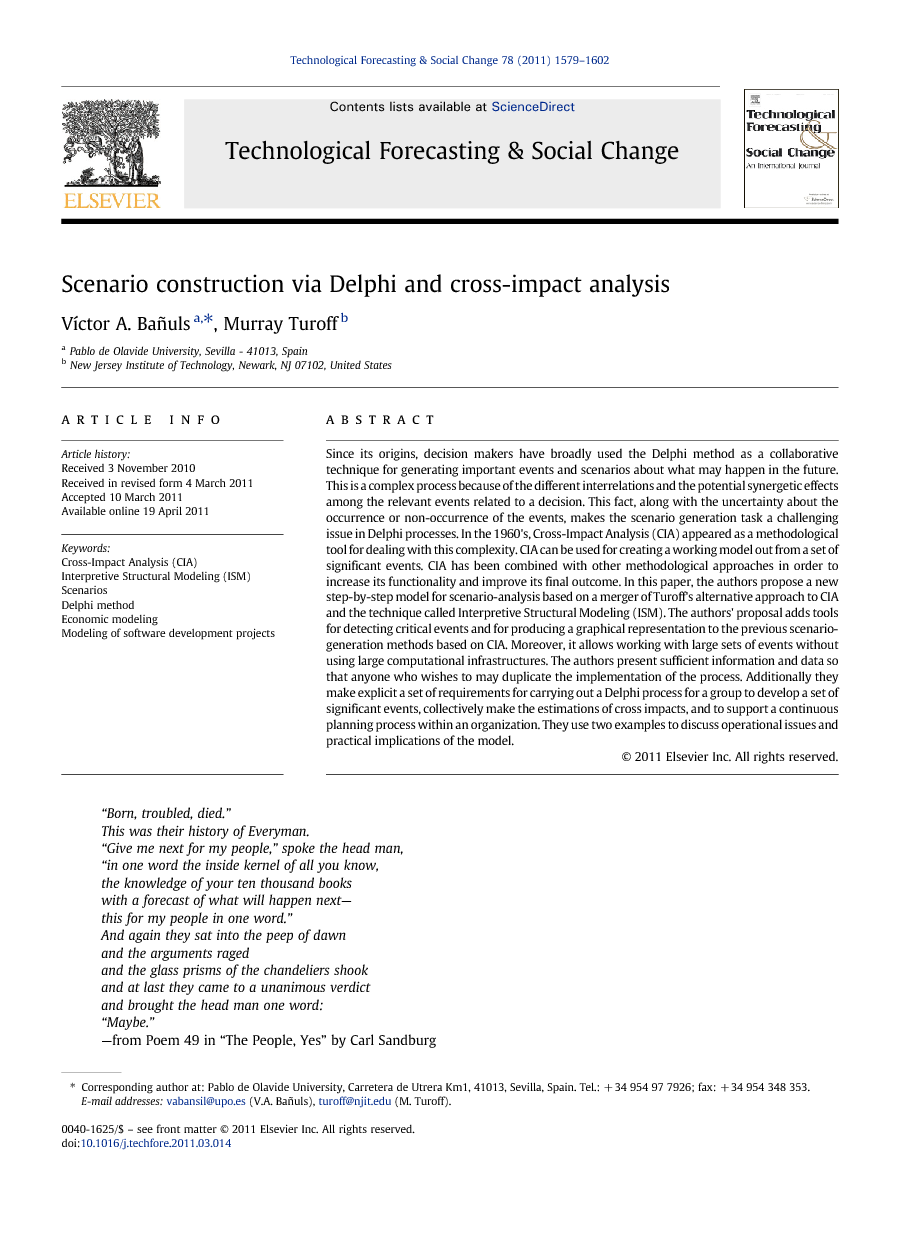 Since its origins, decision makers have broadly used the Delphi method as a collaborative technique for generating important events and scenarios about what may happen in the future. This is a complex process because of the different interrelations and the potential synergetic effects among the relevant events related to a decision. This fact, along with the uncertainty about the occurrence or non-occurrence of the events, makes the scenario generation task a challenging issue in Delphi processes. In the 1960's, Cross-Impact Analysis (CIA) appeared as a methodological tool for dealing with this complexity. CIA can be used for creating a working model out from a set of significant events. CIA has been combined with other methodological approaches in order to increase its functionality and improve its final outcome. In this paper, the authors propose a new step-by-step model for scenario-analysis based on a merger of Turoff's alternative approach to CIA and the technique called Interpretive Structural Modeling (ISM). The authors' proposal adds tools for detecting critical events and for producing a graphical representation to the previous scenario-generation methods based on CIA. Moreover, it allows working with large sets of events without using large computational infrastructures. The authors present sufficient information and data so that anyone who wishes to may duplicate the implementation of the process. Additionally they make explicit a set of requirements for carrying out a Delphi process for a group to develop a set of significant events, collectively make the estimations of cross impacts, and to support a continuous planning process within an organization. They use two examples to discuss operational issues and practical implications of the model.

The days of discrete, periodic long term plans and short term plans are numbered. Planning today for most organizations has to be made a continuous process. One needs to integrate the type of model described here into a complete planning environment. This would provide the following: 1. A system for professionals in the organization to evolve and update the event set that could be used in various models to evaluate various options for major decisions such as new or improved projects, mergers, investments, etc. 2. Participating groups of experts throughout the organization could enter their estimates about the interactions of the events for which they feel confident in making such judgments. 3. Improving both subjective estimates and the models that events contain as new information provides improved intelligence for the estimators. Given the growing complexity of our world, the problems of dealing with a world economy faced with growing threats to required resources and financial interactions that can lead to unpredictable results, we do need greatly improved methods to build and evolve models that can exhibit the requisite variety to cope with such challenges. We have seen the fallacy of using highly paid executives to make decisions based upon the intuition of one person who cannot, because of his or her status and pay, ask for serious help from other humans. This might well explain the retreat from some of the promises of strategic planning methodologies of the past by most non-technological corporations during the last twenty years. In this sense, planning should not be a discrete event in an organization; it must be a continuous process that is integrated into the fabric of an organization. Planning must also be a highly participative process by all the professionals that represent the professional community of the organization. The current understanding of the strengths and weaknesses of the organization must be understood by all the levels of management and this can only occur if the information of the professionals that carry out the functions of the organization flows freely into the planning process. Given the speed at which things happen in our very highly computerized environment, there is not an option to interrupt and put off work on short or long term plans. The distinction between the two becomes meaningless. The inputs of the events and initial conditions and the outcomes will be continually modified and evolved by an efficient Delphi process to allow hundreds to thousands of professionals to supply and interpret new information for generating new options and considerations to be incorporated into an organizational-wide model forming the basis of the planning process. The ability to test future options by choosing to implement them within the model and see likely forecasts of the outcome consequences becomes the essence of a continuous planning process with organizational wide participation. Collaboration and recognition that one of the consequences of the network integration now possible of all the views of the contributors in the organization is what has brought about a new age in society: The age of participation3[60]. Communications in any type of organization will allow collaborative planning on an organizational wide basis. The communication structures to allow many minds to contribute to the examination of complex problem solving and complex model construction are the major challenge in the design of future organizational systems. To contribute to this aim, a new scenario generation methodology has been proposed. The CIA–ISM approach aims at allowing researchers and practitioners to (1) handle complex systems; (2) obtain a set of plausible snapshots of the future; (3) analyze interaction between events; (4) detect critical events. This scenario-generation method might have several potential applications in scenario-planning, foresight, technology assessment, information systems and management. The main strong points of the authors' proposal are: 1. a strong theoretical background for the techniques on which the proposal is based; 2. the possibility of working with large sets of events; 3. tools for analyzing the key drivers of the scenarios; 4. specific software is not needed for making the calculations (e.g. Excel); 5.graphic output that gives a clear representation about the forecast; 6.compatibility with other techniques such as the Delphi, fuzzy or multi-criteria methods. Additionally, the introduction of the merger of cross-impact with ISM is a major extension in allowing the collaborative development of scenarios out of much larger event sets and this ultimately reduces the complexity of foresight. In the typical large scale event sets approaching a hundred events or more, estimation by groups will usually result in the need to subdivide the estimation process among different areas of expertise. It is generally true in Delphi that one should encourage participants to estimate or judge only those areas they feel confident in judging. We have provided an intelligent approach to the evolution of scenarios from event sets which augments human judgment in an integrated manner for the direct construction of a structural relationship model through the use of a computer in a true direct augmentation process without the need for intermediaries to implement computer programs [19] and [44].