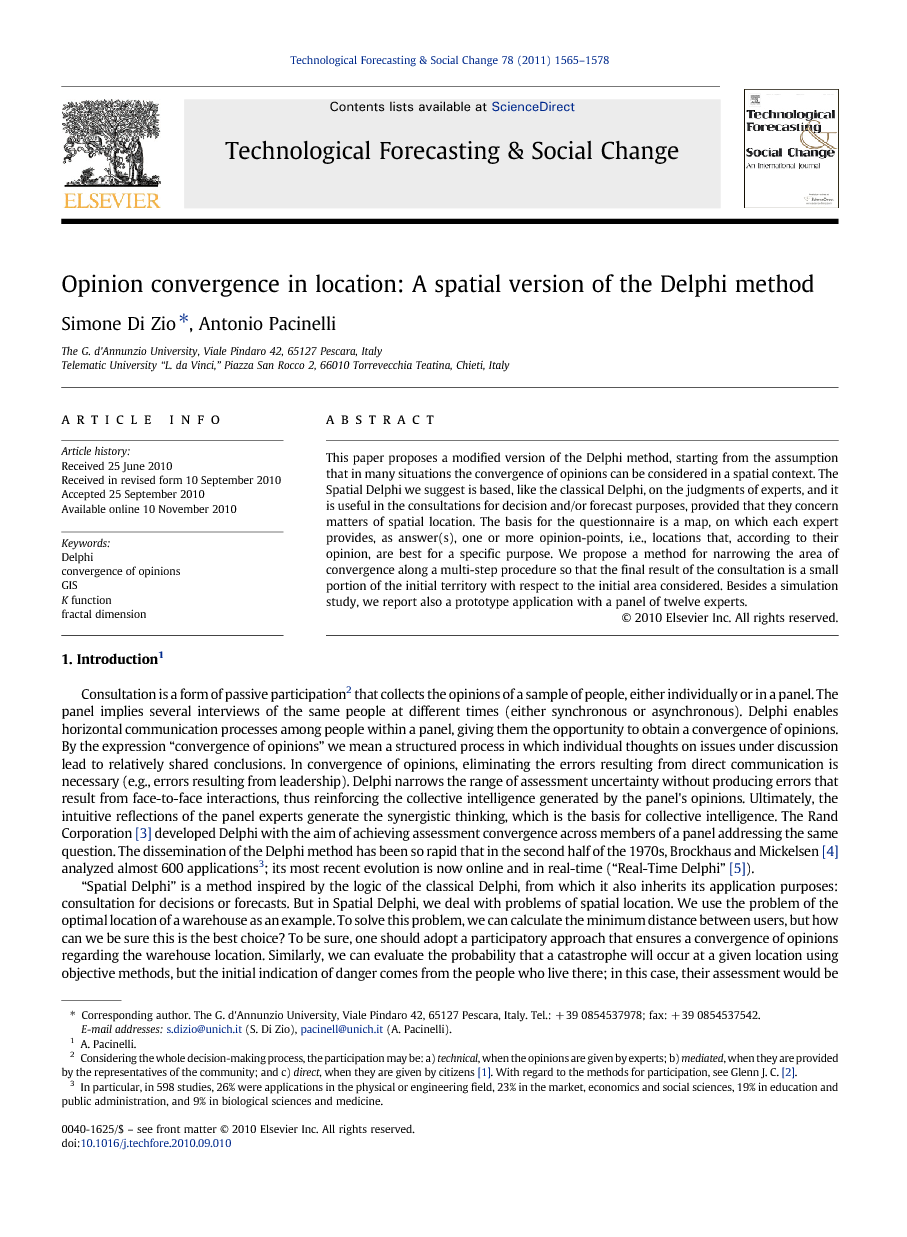 This paper proposes a modified version of the Delphi method, starting from the assumption that in many situations the convergence of opinions can be considered in a spatial context. The Spatial Delphi we suggest is based, like the classical Delphi, on the judgments of experts, and it is useful in the consultations for decision and/or forecast purposes, provided that they concern matters of spatial location. The basis for the questionnaire is a map, on which each expert provides, as answer(s), one or more opinion-points, i.e., locations that, according to their opinion, are best for a specific purpose. We propose a method for narrowing the area of convergence along a multi-step procedure so that the final result of the consultation is a small portion of the initial territory with respect to the initial area considered. Besides a simulation study, we report also a prototype application with a panel of twelve experts.

Consultation is a form of passive participation2 that collects the opinions of a sample of people, either individually or in a panel. The panel implies several interviews of the same people at different times (either synchronous or asynchronous). Delphi enables horizontal communication processes among people within a panel, giving them the opportunity to obtain a convergence of opinions. By the expression “convergence of opinions” we mean a structured process in which individual thoughts on issues under discussion lead to relatively shared conclusions. In convergence of opinions, eliminating the errors resulting from direct communication is necessary (e.g., errors resulting from leadership). Delphi narrows the range of assessment uncertainty without producing errors that result from face-to-face interactions, thus reinforcing the collective intelligence generated by the panel's opinions. Ultimately, the intuitive reflections of the panel experts generate the synergistic thinking, which is the basis for collective intelligence. The Rand Corporation [3] developed Delphi with the aim of achieving assessment convergence across members of a panel addressing the same question. The dissemination of the Delphi method has been so rapid that in the second half of the 1970s, Brockhaus and Mickelsen [4] analyzed almost 600 applications3; its most recent evolution is now online and in real-time (“Real-Time Delphi” [5]). “Spatial Delphi” is a method inspired by the logic of the classical Delphi, from which it also inherits its application purposes: consultation for decisions or forecasts. But in Spatial Delphi, we deal with problems of spatial location. We use the problem of the optimal location of a warehouse as an example. To solve this problem, we can calculate the minimum distance between users, but how can we be sure this is the best choice? To be sure, one should adopt a participatory approach that ensures a convergence of opinions regarding the warehouse location. Similarly, we can evaluate the probability that a catastrophe will occur at a given location using objective methods, but the initial indication of danger comes from the people who live there; in this case, their assessment would be helpful. In the literature, subjective data are weaker than objective data, and this fact brings out Delphi's main virtue. Putting aside the scientific inferiority of subjective data, the question becomes: how can subjective evaluations be strengthened? As in the classical Delphi, the subjective evaluations of several people should be converged. To achieve this purpose, one should structure the following: 1. Collection of judgments in an iterative framework (i.e., controlled feedback) so that participants can review their assessments several times after comparing them with the responses of the group; 2.Contacts (e.g., through anonymity); 3. Opinion convergence (e.g., provide ranges identified through statistical parameters). For the application of Delphi in the field of forecasts and spatial decisions, we propose a procedure that inserts two innovations in the third point, i.e., in structuring the convergence of opinions. a) In the classical Delphi, the convergence is governed by the interquartile range, which contains 50% of the respondents. In our Spatial Delphi, we keep these guidelines, but rather than an interval containing 50% of opinions, we use an area. According to the requirements of the problem, other percentages of opinions may be adopted to construct the convergence area, also considering the time needed for convergence. We face now two problems: the shape of the area and its location. First, the evaluations of the panel are represented as a cloud of points on the study area, where each point represents the evaluation of one expert with respect to the localization problem. These points are opinion-points. Regarding the shape of the convergence area, a broken closed line connecting the external opinion-points of the cloud and containing 50% of the opinion-points is less wide than a circle but would leave less space for the assessments of a subsequent iteration. Therefore, in this first approach of the Spatial Delphi, we use the circle to leave room for later iterations. Furthermore, in a spatial domain—without additional information—we cannot have a favorite direction, so the circle is the only anisotropic 2-D shape usable. Second, we decided to center the circle on one of the opinion-points because any other central point (e.g., the geographic mean or median center) would not guarantee an evaluation for that location. In other words, we want to avoid a correspondence between the center of the convergence circle and a location not expressed by the panelists. b) Within the classical Delphi, each expert provides one evaluation for each step, whereas in the Spatial Delphi, experts can give multiple opinion-points according to the number of rounds. For example, in a three-round procedure, each panelist identifies three points in the first round, two points in the second round and one point in the final round. This way, we collect a greater quantity of points and the respondents are guided toward more accurate considerations. We think that having fewer opinions to express will allow experts to be more creative and bold at the beginning of the procedure and be increasingly careful and thoughtful as the procedure continues. These two innovations are implemented in the stated order and in two different situations: (a) with a simulation study, we present the area of opinion convergence with only one opinion-point for each expert and iteration (Section 4) and (b) in a prototype study with 12 experts, we also tested the approach with decreasing opinion-points (Section 5).

We have seen that using a map it is possible to reproduce the Delphi method in a spatial context. Of course our method is a prototype and many questions are still open. For example, with regard to the shape of the area we have used a circle and for its center we have chosen one of the opinion-points provided by the experts. But we believe that these choices must be studied in depth, and other solutions should be explored too. Another open question regards the kind of map used and, in particular, the scale of the map. Considering the possibility of using a Web GIS, both these problems disappear because a GIS system allows both the visualization of as many layers as needed by the application and any zooming operation. A further aspect to consider is the way the questionnaire is presented in the rounds subsequent to the first. Instead of giving a map with only the circle and the points to be placed (as in our application) it could be interesting to give for each expert a map with the circle together with his or her previous opinion-points. In that case each expert could watch his or her previous evaluations and compare them with the circle. For example if only one of the given points were outside the circle, it become simple and immediate to eliminate it. Or if all points were outside the circle, the expert could eliminate one point, probably the furthest, and eventually move the others inside the circle. Finally, we believe that the natural evolution of this system, through the use of a Web GIS technology, will be a real-time version, in analogy to the Real-Time Delphi [5] and [12]; thus, a development of our method could be called the Spatial Real-Time Delphi. Although we are aware that this is only a preliminary experiment, these early results are encouraging. We summarize the main aspects of this paper in the following points: •It is known that one of the most feared defects of Delphi is the “phenomenon of abandon,” but this problem disappeared in our experiment because this study had no participant loss. •The primary objective of the trial (reduction of area) was achieved because the final area of convergence was approximately 0.08% (major risk) and 0.88% (minor risk) of the total region considered (see Table 2 and Table 3). •The experts appreciated the fact that in each round the number of opinion-points decreased (that is three–two–one). •The use of multiple points that are reduced over subsequent rounds could be not applicable in every circumstances. For example, in the identification of the best place to build something the choice of the expert in each round should be a single location. In these situations the solution is to give only one dot to locate in each round, whereas the remainder of the procedure runs in the same way, as shown in the simulation study. •The other maps attached to the questionnaire helped the experts in their assessments because the two final areas of convergence were located in zones where the INGV calculated high and low risk for earthquakes. • Another problem of the classical Delphi is the unwillingness to abandon a position once it is taken [13]. In our case, we noted that the simplicity of moving a point on the map with the possibility of both keeping some evaluations and abandoning one opinion of the preceding round reduced this problem to almost zero. •Probably because of the ease of giving responses, the total time of this experiment, including the elaborations, was very short, i.e., three weeks. This timeframe bodes well for a future implementation of this method in Gordon's Real-Time Delphi [5] and [12]. • The final survey addressed to the panel of experts highlighted that the methodology appears to be the most appropriate, although there were problems regarding the wealth of information and the geographical extent of the supporting maps. Therefore, the completeness and accuracy of the supporting maps becomes a key feature for the correct application of the Spatial Delphi.