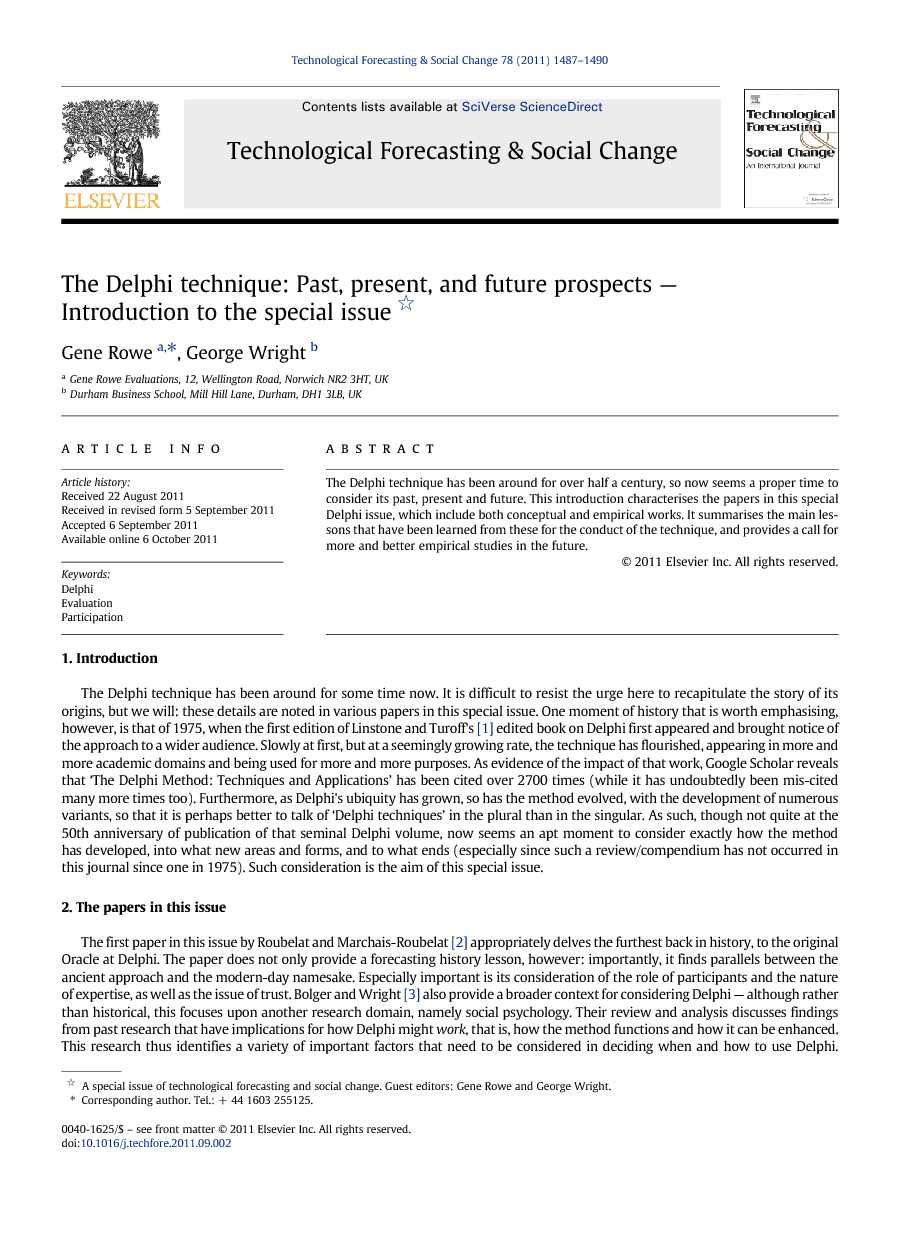 The Delphi technique has been around for over half a century, so now seems a proper time to consider its past, present and future. This introduction characterises the papers in this special Delphi issue, which include both conceptual and empirical works. It summarises the main lessons that have been learned from these for the conduct of the technique, and provides a call for more and better empirical studies in the future.

The Delphi technique has been around for some time now. It is difficult to resist the urge here to recapitulate the story of its origins, but we will: these details are noted in various papers in this special issue. One moment of history that is worth emphasising, however, is that of 1975, when the first edition of Linstone and Turoff's [1] edited book on Delphi first appeared and brought notice of the approach to a wider audience. Slowly at first, but at a seemingly growing rate, the technique has flourished, appearing in more and more academic domains and being used for more and more purposes. As evidence of the impact of that work, Google Scholar reveals that ‘The Delphi Method: Techniques and Applications’ has been cited over 2700 times (while it has undoubtedly been mis-cited many more times too). Furthermore, as Delphi's ubiquity has grown, so has the method evolved, with the development of numerous variants, so that it is perhaps better to talk of ‘Delphi techniques’ in the plural than in the singular. As such, though not quite at the 50th anniversary of publication of that seminal Delphi volume, now seems an apt moment to consider exactly how the method has developed, into what new areas and forms, and to what ends (especially since such a review/compendium has not occurred in this journal since one in 1975). Such consideration is the aim of this special issue.

The papers in this special issue bring together a wide variety of perspectives on the Delphi technique(s) from some of the most important contributors to the thinking and development of the method of the last forty-fifty years. The ubiquity of application that they hint at suggests that, in many domains, the method has filled a deep need of academics and practitioners for structured ways of assessing and combining human judgement. The more exposure the method gains, the greater its uptake; in many cases, Delphi seems to be a method that enables researchers to ask and answer questions that, previously, they did not know how to address. In this growth, we – as ‘supporters’ of the method (by which we mean, people who are aware of the potential uses and benefits of the approach) – should be pleased. However, a great danger lies in the uncritical adoption of the method, or the careless application of it. From our personal experience we are aware of how difficult it can be to do Delphi right, and how easy it is to mis-frame questions, or fail in recruiting appropriate experts (whether true experts or lay citizens with relevant knowledge), or in creating the right context to ensure participants continue through to the end of the process, take the task seriously, and contribute to an output that is useful and will be used by exercise sponsors. Many of the papers here provide guidelines for how to enhance use of the method, including: Improving panellist recruitment and retention over Delphi rounds, through: • Using a person-to-person cascade approach (i.e., “snowballing”) to secure easy agreement to panellist invitations (which will also strengthen subsequent panellist retention) [4] and [5] • Making use of publically-available bibliographic information to identify potential expert panellists [5] • Noting that self-rated experts tend to exhibit less drop-out over Delphi rounds than those who rate themselves as less-expert [5] • Stressing the practical policy application of the Delphi yield to expert panellists to aid their retention [6] • If panellists are widely scattered across the world, being aware of the de-motivating effect of poor internet speeds with complex graphical content in communications [4] • Using social rewards for recognition of participation — such as subsequently publishing panel membership listings [3]. Creating useful heterogeneity in panel membership through: • Including experts and laypeople to increase the variety of viewpoints amongst first round opinions — even though the lay opinions will be less stable and tend to reduce to expert viewpoints over rounds [13] • Creating artificial heterogeneity in opinions at the first Delphi round – using role-playing, devil's advocacy, and dialectical inquiry – and in this way, facilitating alternative framings [3]. Enhancing information exchange between panellists, through: • Removing any indicators of the prevalence of majority or minority opinions [3], [15] and [16] • Removing any indication of panellists' confidence levels [3] and [15] • Using rich qualitative feedback of panellists' rationales and reasoning behind their judgments [3], [10] and [15] • Being alert to stability in dissensus over Delphi rounds — which could indicate the need to explore panellists' underpinning assumptions and logics in subsequent face-to-face meetings [7]. Improving question formulation through: • Using an exploratory workshop to refine first-round Delphi questions [4] •Using easy-to-answer questioning, preferably involving closed questions, for use in Delphi rounds [4] • Using simple English expression in questions when panellists do not have English as a first language — but noting that exchange of rationales and reasons between panellists will likely also be similarly restricted [4] • Using Delphi questions with unambiguous wording such that subsequent evaluation of event outcomes is clear-cut [18]. Considering combining Delphi with other techniques: •Being aware of the benefits of technique combination to enhance panellist creativity and commitment [12] •Being aware of the usefulness of Delphi as a means of eliciting group-based judgments for integration with other futures methodologies (as well as, for example, for establishing exogenous variables for econometric models, or in forming the coefficients for an input-output table) [9], [10] and [11] • Measuring forecast desirability expressions of individual panel members and thus identifying potential optimism and pessimism bias [14] • Being aware that real-time Delphi and conventional Delphi produce similar results and that choice of the former approach has potential benefits [16]. Many of these findings and observations have been made before — often in an off-hand manner, without particularly strong empirical support. And this brings us to our final point: there is still a lack of good empirical studies that provide more rigorous answers to ‘how to’ questions. When we first came to the subject 20 years ago, this was our initial insight [23], which we followed up with a number of empirical studies that, we felt, were as important for showing how one might research Delphi processes as in the results they provided per se [e.g. [24] and [25]]. Since then, however, we have sensed little increment in such empirical studies — even though applications of method use have grown impressively. We continue to believe that it is especially important that decisions about whether to use Delphi (against using an alternative approach), decisions about which variant to use, and decisions about how to precisely enact one's chosen variant, be informed by sound (social) science. In enacting this agenda, it is important to be aware of research conducted in related literatures (as summarised here by Bolger and Wright [3]), as well as to appreciate important concepts such as validity and reliability and what these mean (or should, or can, mean) in contexts in which Delphi might be employed [17] and [18]. Therefore our final urging is for researchers to take up this challenge of evidence, and ensure that scientific evaluations of the foundations of the method – established half-a-century ago – are strengthened and deepened.