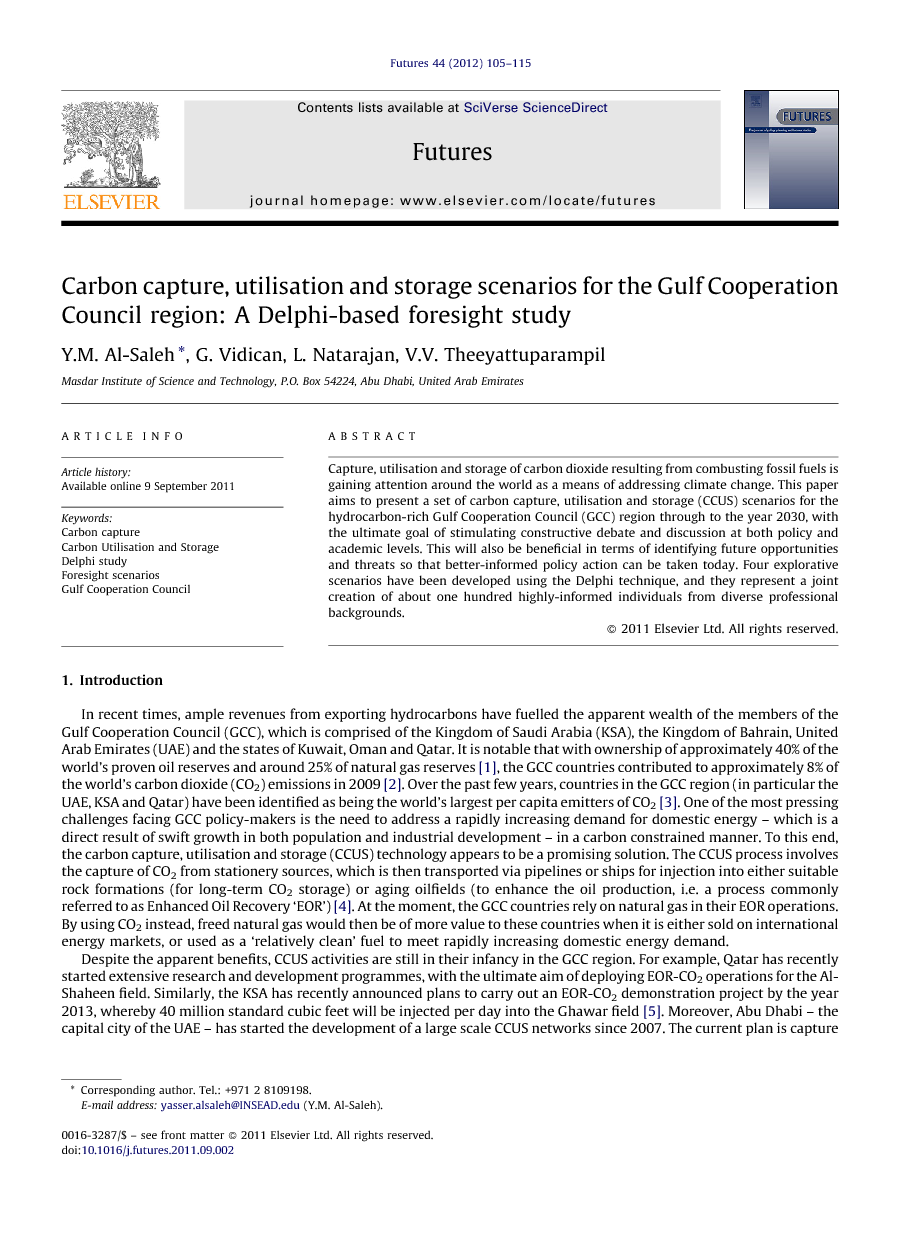 Capture, utilisation and storage of carbon dioxide resulting from combusting fossil fuels is gaining attention around the world as a means of addressing climate change. This paper aims to present a set of carbon capture, utilisation and storage (CCUS) scenarios for the hydrocarbon-rich Gulf Cooperation Council (GCC) region through to the year 2030, with the ultimate goal of stimulating constructive debate and discussion at both policy and academic levels. This will also be beneficial in terms of identifying future opportunities and threats so that better-informed policy action can be taken today. Four explorative scenarios have been developed using the Delphi technique, and they represent a joint creation of about one hundred highly-informed individuals from diverse professional backgrounds.

In recent times, ample revenues from exporting hydrocarbons have fuelled the apparent wealth of the members of the Gulf Cooperation Council (GCC), which is comprised of the Kingdom of Saudi Arabia (KSA), the Kingdom of Bahrain, United Arab Emirates (UAE) and the states of Kuwait, Oman and Qatar. It is notable that with ownership of approximately 40% of the world's proven oil reserves and around 25% of natural gas reserves [1], the GCC countries contributed to approximately 8% of the world's carbon dioxide (CO2) emissions in 2009 [2]. Over the past few years, countries in the GCC region (in particular the UAE, KSA and Qatar) have been identified as being the world's largest per capita emitters of CO2[3]. One of the most pressing challenges facing GCC policy-makers is the need to address a rapidly increasing demand for domestic energy – which is a direct result of swift growth in both population and industrial development – in a carbon constrained manner. To this end, the carbon capture, utilisation and storage (CCUS) technology appears to be a promising solution. The CCUS process involves the capture of CO2 from stationery sources, which is then transported via pipelines or ships for injection into either suitable rock formations (for long-term CO2 storage) or aging oilfields (to enhance the oil production, i.e. a process commonly referred to as Enhanced Oil Recovery ‘EOR’) [4]. At the moment, the GCC countries rely on natural gas in their EOR operations. By using CO2 instead, freed natural gas would then be of more value to these countries when it is either sold on international energy markets, or used as a ‘relatively clean’ fuel to meet rapidly increasing domestic energy demand. Despite the apparent benefits, CCUS activities are still in their infancy in the GCC region. For example, Qatar has recently started extensive research and development programmes, with the ultimate aim of deploying EOR-CO2 operations for the Al-Shaheen field. Similarly, the KSA has recently announced plans to carry out an EOR-CO2 demonstration project by the year 2013, whereby 40 million standard cubic feet will be injected per day into the Ghawar field [5]. Moreover, Abu Dhabi – the capital city of the UAE – has started the development of a large scale CCUS networks since 2007. The current plan is capture 5 MTPA (i.e. Million Tonnes per Annum) by 2014–2017, and a total of 30 MTPA by 2030. It is perhaps worth noting here at the first EOR-CO2 pilot study was conducted at the Rumaitha field in the UAE, with the announced aim of understanding the behaviour of CO2 in the heterogeneous carbonate oil-bearing reservoirs before commencing full-scale development [6]. On the global front, four industrial-scale CCUS projects are currently in operation, namely Sleipner and Snøhvit projects (in Norway), Weyburn-Midale (in Canada) and Salah (in Algeria). Van Alphen et al. [7] documented several other projects which are still in the pilot phase, and acknowledged some of the challenges that are currently facing CCUS endeavours such as lack of financial viability and political support, non-existence of a supportive regulatory framework to oversee CCUS activities, in addition to technological challenges including energy penalties for industrial facilities when retro-fitted with CO2 capture technologies. Given the limited research on the prospects of CCUS in hydrocarbon-rich countries, this paper presents a set of plausible CCUS future development scenarios for the GGC region by means of the Delphi technique. The ultimate aims of this paper are twofold: (i) to provide food for thought and stimulate constructive discussion in both academic and policy-making circles on the factors perceived as being critical for promoting CCUS endeavours; (ii) to explore potential opportunities and challenges that could affect the future deployment of CCUS activities in the GCC region. In the next section, an overview of the Delphi methodology is provided. Following this, we discuss the design of this foresight-orientated study and the development of CCUS scenarios framework. We then explain the scenarios’ narratives (i.e. qualitative assumptions) and present their quantitative implications. The paper ends with suggestions on possible future research directions that emerge from this study.

In retrospect, the oil-rich GCC countries have a unique opportunity to both reduce their CO2 emission levels and address the issue of oilfield depletion. The advantages of freeing natural gas through replacing it with CO2 – along with the potential revenues that could be generated from increased oil production through EOR-CO2 – are estimated to be enormous. It is evident that the various CCUS scenarios presented herewith indicate that the GCC countries (and indeed the whole world) stand to benefit by shifting away from the ‘Business as Usual’ scenario. Our study confirms that the potential benefits (economic and otherwise) can easily outweigh the costs associated with constructing and operating the CCUS plants. More specifically, it is estimated that the net potential earnings (expressed in million USD) are around 600,000 (Policy Pull scenario); 660,000 (Technology Push scenario) and 1,200,000 (Game-changer scenario). In addition, as suggested by the Delphi panellists, embarking upon CCUS projects could bring to the GCC region a suite of other benefits (the value of which is harder to estimate), such as potential job creation and an opportunity to improve the environmental profiles of the GCC countries, which currently have the unenviable tag of being the world's largest per capita emitters of CO2. In the long run, it is believed that CCUS offers the GCC region an attractive transition opportunity to achieve sustainable development for this currently hydrocarbon-endowed region. On another level, the study findings suggest that successful deployment of CCUS in the GCC region is largely dependent upon the cost of CO2 capture and the existence of a supportive regulatory and policy environment. Indeed, a favourable regulatory framework to guide the CCUS-based activities in the GCC countries can positively impact on the growth of CCUS projects. In addition, sufficient financial support in the form of short-term funding and subsidies can bridge the gap for reaching market competitiveness. The absence of both of these critical factors has discouraged private firms and investors from participating in these activities. Moreover, regional and international collaboration has been identified as a crucial means of sharing the knowledge, expertise, costs, CO2 storage and risks associated with CCUS activities. Given that the subject of CCUS is under-researched within the GCC region, it is hoped that the developed CCUS scenarios will help in terms of stimulating both constructive debate and action in policy-making circles. With regard to future directions in academia, there seems to be an urgent need for further policy-orientated work in order to define suitable policy and regulatory packages for possible pathways towards CCUS development. As a final note, although this Delphi study has been conducted in an anonymous setting – and given the relatively small community of professionals currently working at the emerging CCUS field – it is likely that most of the participants are already acquainted to each other. One would expect, therefore, that discussion on the promising outcomes of this pioneering study is likely to spread quickly among their peers. After all, the strong engagement of the participating CCUS experts that has been experienced when conducting this Delphi exercise reflects keenness on their part towards collaborations and knowledge-sharing endeavours.