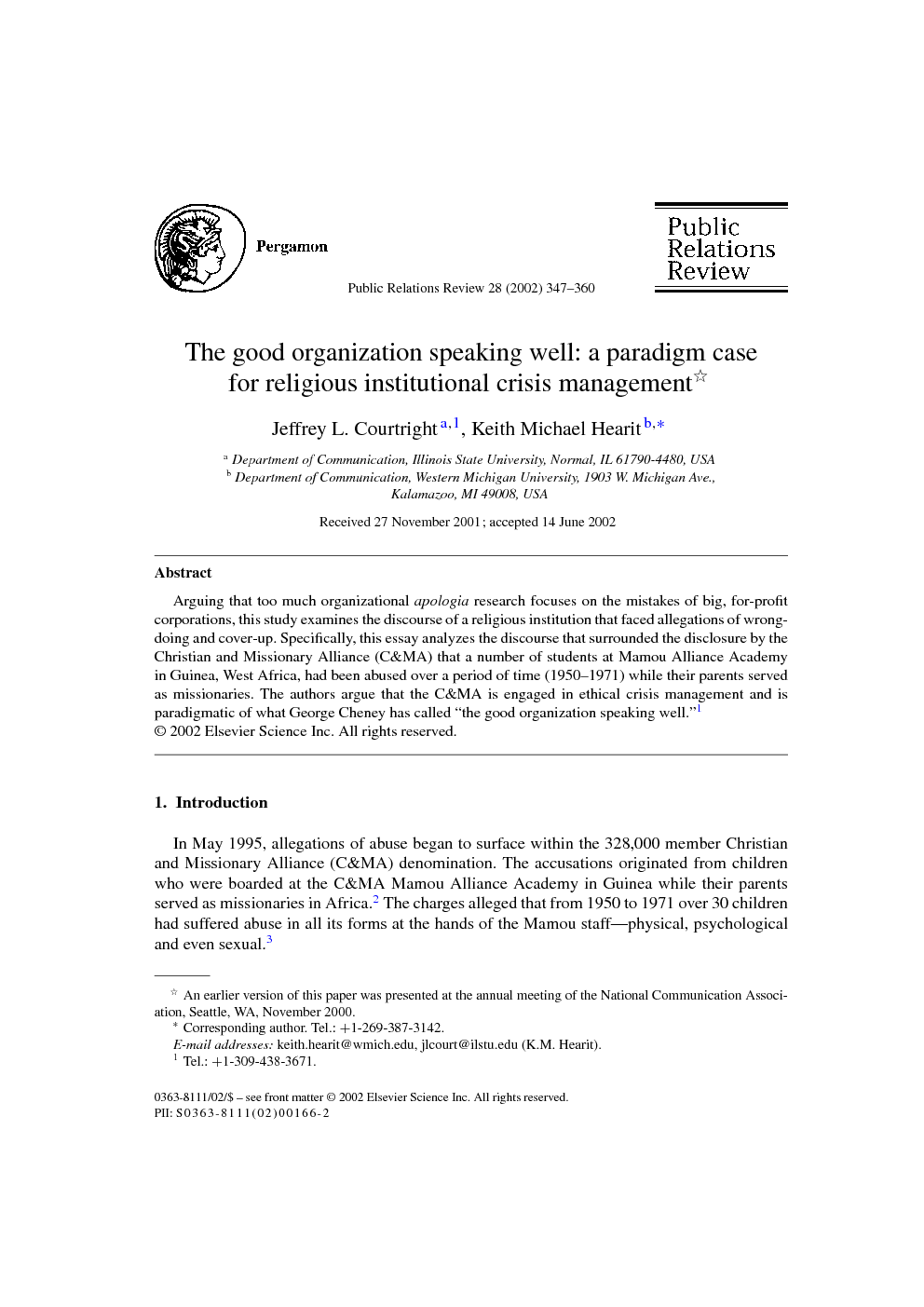 Arguing that too much organizational apologia research focuses on the mistakes of big, for-profit corporations, this study examines the discourse of a religious institution that faced allegations of wrongdoing and cover-up. Specifically, this essay analyzes the discourse that surrounded the disclosure by the Christian and Missionary Alliance (C&MA) that a number of students at Mamou Alliance Academy in Guinea, West Africa, had been abused over a period of time (1950–1971) while their parents served as missionaries. The authors argue that the C&MA is engaged in ethical crisis management and is paradigmatic of what George Cheney has called “the good organization speaking well.

In May 1995, allegations of abuse began to surface within the 328,000 member Christian and Missionary Alliance (C&MA) denomination. The accusations originated from children who were boarded at the C&MA Mamou Alliance Academy in Guinea while their parents served as missionaries in Africa.2 The charges alleged that from 1950 to 1971 over 30 children had suffered abuse in all its forms at the hands of the Mamou staff—physical, psychological and even sexual.3 At first the C&MA showed a great deal of institutional resistance in responding to the grass-roots efforts of the five-person Mamou Steering Committee, led by spokesperson Richard Darr, which had attempted to get the C&MA to resolve the matter privately.4 But confronted with the growing number of stories of abuse as well as the threat of more public exposure, the C&MA created a panel later in 1995 to investigate the allegations. The denomination in 1998 released the panel report, which admitted the truth of the allegations and also detailed the abuse that occurred at the hands of nine individuals. In addition to identifying those who committed the abuse, the report faulted the denomination for negligence in oversight of the school.5 During a retreat at the Simpsonwood Conference and Retreat Center in suburban Atlanta, C&MA President Peter Nanfelt (among others) apologized to the 80 adults present who had suffered the abuse as children.6 The response of the C&MA constitutes what scholars of rhetoric have typically described as an apologia—a speech of defense that has as a motive the clearing of one’s name.7 In this case, the C&MA used what Kruse has described as a non-denial form of apologia.8 An elastic form of discourse, the study of the genre of apologia increasingly has been applied to the study of organizations engaged in crisis management, using the strategies first articulated by Ware and Linkugel to repair their damaged images and reputations.9 It is our position that there is undue tendency on the part of many (the current authors included) to focus on the crisis management of large, for-profit corporations and their all too common behavioral and communication mistakes. Conversely, we assert that the C&MA Mamou case presents a unique opportunity to focus on an organization that comes to grips with the problem of its institutional guilt. In so doing, we take a Burkean perspective that views religious rhetoric as a paradigmatic of all language use,10 and use it to argue that the C&MA offers a model of how an institution can respond ethically and creatively in a crisis situation. To support this thesis, we first situate this paper within the study of organizational and institutional apologiae; second, we discuss the details of the tragic case at the Mamou school; third, we analyze the communication efforts of the C&MA in coming to grips with this problem; and finally, we offer a number of conclusions as to the nature of institutional apologiae, recommending the example of C&MA as particularly instructive in situations of corporate guilt.