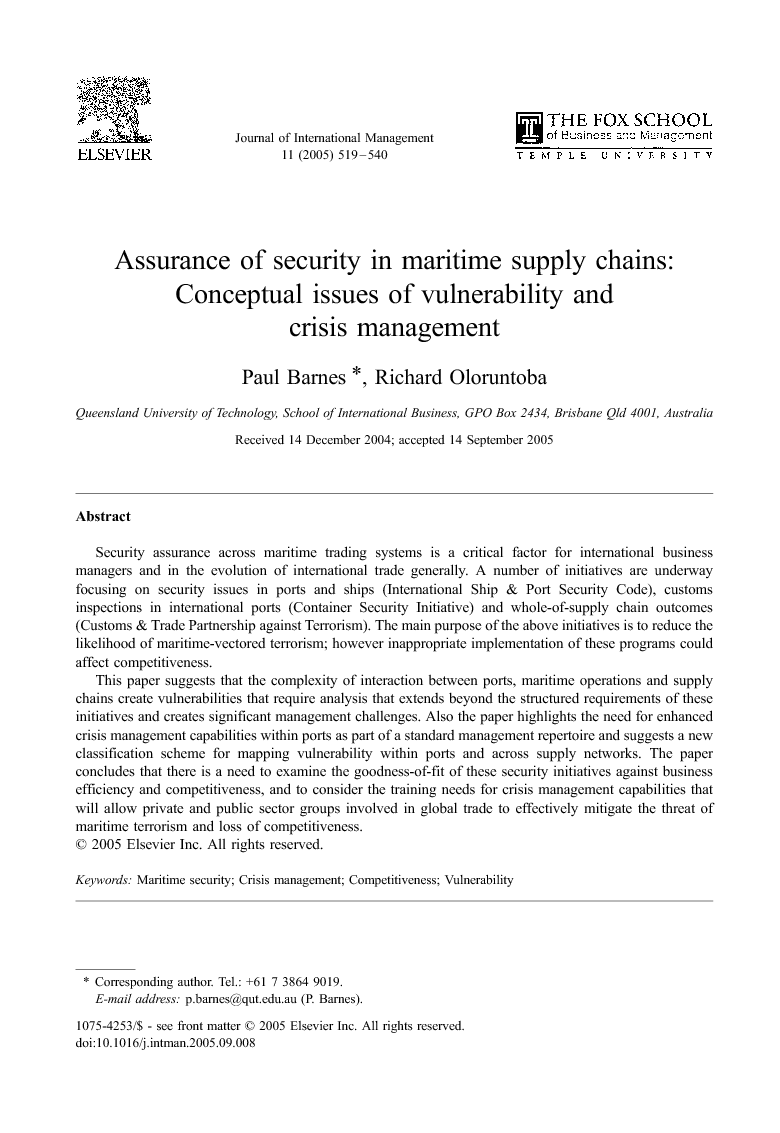 Security assurance across maritime trading systems is a critical factor for international business managers and in the evolution of international trade generally. A number of initiatives are underway focusing on security issues in ports and ships (International Ship & Port Security Code), customs inspections in international ports (Container Security Initiative) and whole-of-supply chain outcomes (Customs & Trade Partnership against Terrorism). The main purpose of the above initiatives is to reduce the likelihood of maritime-vectored terrorism; however inappropriate implementation of these programs could affect competitiveness. This paper suggests that the complexity of interaction between ports, maritime operations and supply chains create vulnerabilities that require analysis that extends beyond the structured requirements of these initiatives and creates significant management challenges. Also the paper highlights the need for enhanced crisis management capabilities within ports as part of a standard management repertoire and suggests a new classification scheme for mapping vulnerability within ports and across supply networks. The paper concludes that there is a need to examine the goodness-of-fit of these security initiatives against business efficiency and competitiveness, and to consider the training needs for crisis management capabilities that will allow private and public sector groups involved in global trade to effectively mitigate the threat of maritime terrorism and loss of competitiveness.

As the world attempted to come to terms with the events of September 11, 2001 both in regard to its impact as a major catastrophe and on international security, responses within the business world varied while impacts on businesses differed with longer-term consequences ranging from minor to extreme. While the shutdown of domestic air space and the diversion of international flights was an obvious reaction during the initial focus of crisis management, attention moved to security in the maritime transport sector; specifically maritime trade as vector for the delivery of terrorist acts to the US mainland. The sea-container shipping system and vulnerabilities inherent within industry practice attracted particular attention. Of concern was a capacity to covertly move contraband material, including humans, through vast and complex global supply chains. This growing concern about moving goods and services across ‘economic’ boundaries has arguably intensified in the years following September 11 and in the aftermath of the terrorist incidents in Bali, Madrid, Jakarta and most recently London, to the point where trading boundaries have become ‘security’ boundaries (Suárez de Vivero and Rodríguez Mateos, 2004). The International Maritime Organization (IMO), International Maritime Bureau (IMB) and other groups such as the World Customs Organization (WCO) have jointly supported processes that enhance regulatory coverage of safety and security within the world trading system. As a result of efforts within the IMO a number of security measures have been formalized, including changes to the Safety of Life at Sea (SOLAS) Convention that specifically address ship security with updated requirements for compliance with the International Ship and Port Facility Security (ISPS) Code. In addition to these mandatory changes, the United States (U.S.) has actively promoted a series of voluntary trade programmes aimed at enhancing security of trade into North American seaports and indirectly into other major trading nations. While not binding on trading partners, the measures seek to provide levels of security assurance and facilitate enhanced movement of cargo by participating ports, carriers and companies. These measures are intended to provide a competitive advantage to early voluntary adopters over time. The two principal voluntary programmes are the Container Security Initiative (CSI) and the Customs-Trade Partnership against Terrorism (C-TPAT). As recently as July 2004, 20 major trading ports had voluntarily adopted the CSI initiative (U.S. Dept. of State, 2004). Both the CSI and C-TPAT focus on sound strategies for addressing container security, and whole-of-supply chain issues. However, these initiatives have been recognized as constituents of a framework for building a maritime security regime, and that significant gaps in security coverage will remain (Frittelli, 2003), even if adopted broadly in international settings. While such gaps in security coverage, policy and practice may be recognized there is arguably, varied appreciation of the complexity of the international trading system itself and the importance of well-integrated operational processes and security regimes within the port and host country infrastructure, and between the port and the maritime trading routes themselves. The impact of the implementation of these voluntary initiatives on competitiveness is yet to be determined with any accuracy. This paper argues that the expected reliability and assurance of security in maritime trade will not derive from the adoption of either mandatory or voluntary trade security frameworks alone. It suggests that effective security outcomes will result not from ensuring minimal compliance with the requirements set out in these anti-terrorist measures, but from properly integrating underlying concepts into existing managerial practice and making sure it is sustainable. Furthermore, the reliability of such regimes will depend on how practices are incorporated into the risk and crisis management systems used by the organizations that manage port-based infrastructure and links with other international trade-related and security assurance systems operating within the port's host country. Failure to calibrate such programmes to a fluid and changeable threat environment as well as to the functional and business needs of exporters and importers is likely to adversely affect the effectiveness of supply chains and ultimately global competitiveness. After detailing a number of recognized risk factors within the international maritime trading system and current security practices, this paper discusses economic impacts of terrorist activities and examines the importance of vulnerability analysis for both on and offshore aspects of maritime trade and commerce, as well as introducing a classification scheme for defining vulnerability in port and maritime settings. The paper concludes by identifying a number of urgent issues relevant to both security policy and management practice within maritime supply chains.

Assurance of trade security and continuity of supply chains are critical factors in the current global environment. While the conceptual bases for crisis management and related capabilities defined here are well grounded in historical instances of major institutional systems failure and post-crisis learning, there is a need to confirm their suitability and applicability to the task specifications and operational frameworks operating within port and maritime trade settings. An equally important issue for consideration is the impact of implementing both the treaty mandated ISPS code and voluntary CSI and C-TPAT initiatives at operational ports. How these programs are implemented and applied are at the nexus of ensuring security in global supply chains while pursuing business efficiencies. It is arguable that as the post-modern world evolves achieving the former may be at the expense of the latter.