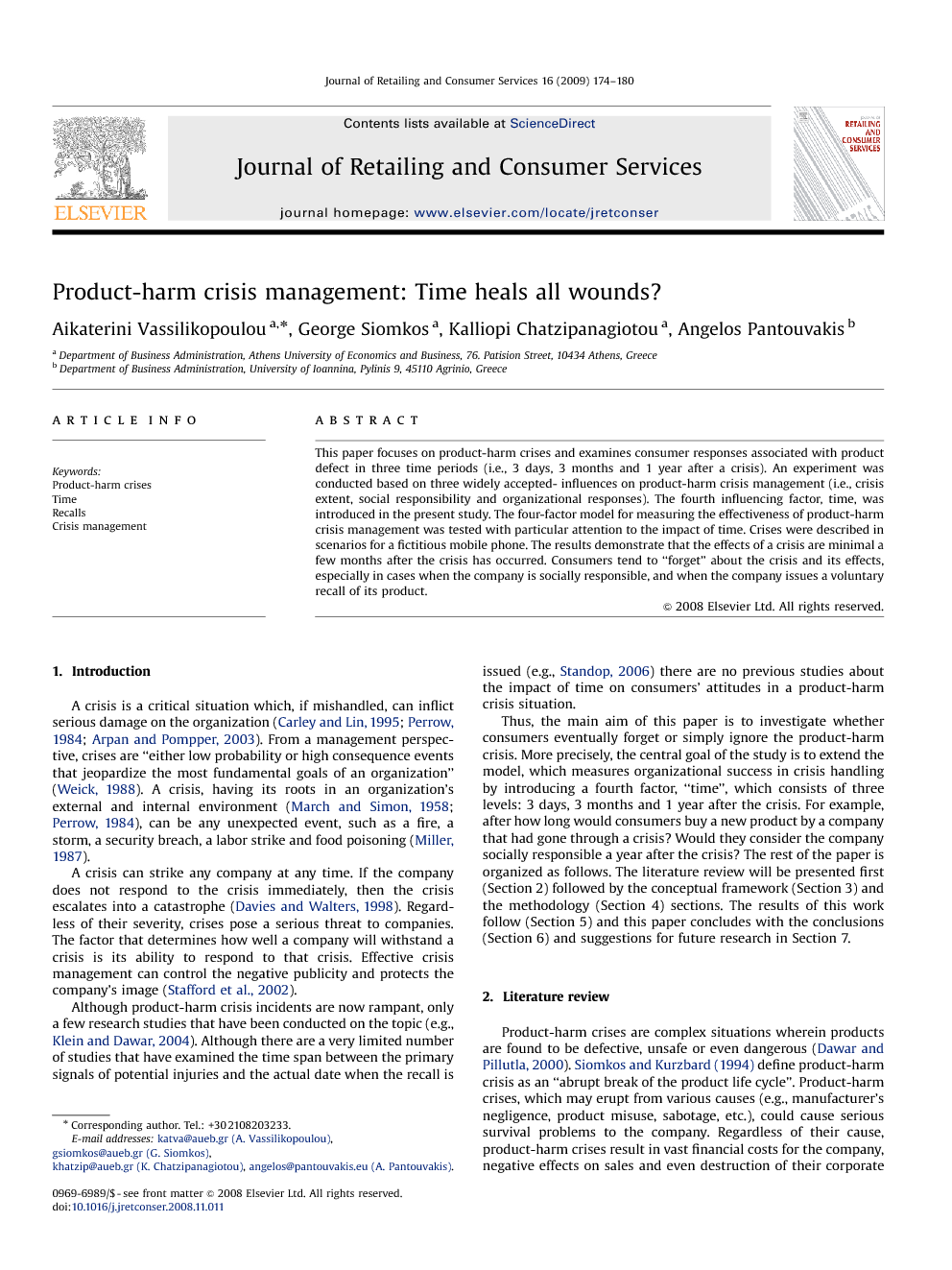 This paper focuses on product-harm crises and examines consumer responses associated with product defect in three time periods (i.e., 3 days, 3 months and 1 year after a crisis). An experiment was conducted based on three widely accepted- influences on product-harm crisis management (i.e., crisis extent, social responsibility and organizational responses). The fourth influencing factor, time, was introduced in the present study. The four-factor model for measuring the effectiveness of product-harm crisis management was tested with particular attention to the impact of time. Crises were described in scenarios for a fictitious mobile phone. The results demonstrate that the effects of a crisis are minimal a few months after the crisis has occurred. Consumers tend to “forget” about the crisis and its effects, especially in cases when the company is socially responsible, and when the company issues a voluntary recall of its product.

A crisis is a critical situation which, if mishandled, can inflict serious damage on the organization (Carley and Lin, 1995; Perrow, 1984; Arpan and Pompper, 2003). From a management perspective, crises are “either low probability or high consequence events that jeopardize the most fundamental goals of an organization” (Weick, 1988). A crisis, having its roots in an organization's external and internal environment (March and Simon, 1958; Perrow, 1984), can be any unexpected event, such as a fire, a storm, a security breach, a labor strike and food poisoning (Miller, 1987). A crisis can strike any company at any time. If the company does not respond to the crisis immediately, then the crisis escalates into a catastrophe (Davies and Walters, 1998). Regardless of their severity, crises pose a serious threat to companies. The factor that determines how well a company will withstand a crisis is its ability to respond to that crisis. Effective crisis management can control the negative publicity and protects the company's image (Stafford et al., 2002). Although product-harm crisis incidents are now rampant, only a few research studies that have been conducted on the topic (e.g., Klein and Dawar, 2004). Although there are a very limited number of studies that have examined the time span between the primary signals of potential injuries and the actual date when the recall is issued (e.g., Standop, 2006) there are no previous studies about the impact of time on consumers’ attitudes in a product-harm crisis situation. Thus, the main aim of this paper is to investigate whether consumers eventually forget or simply ignore the product-harm crisis. More precisely, the central goal of the study is to extend the model, which measures organizational success in crisis handling by introducing a fourth factor, “time”, which consists of three levels: 3 days, 3 months and 1 year after the crisis. For example, after how long would consumers buy a new product by a company that had gone through a crisis? Would they consider the company socially responsible a year after the crisis? The rest of the paper is organized as follows. The literature review will be presented first (Section 2) followed by the conceptual framework (Section 3) and the methodology (Section 4) sections. The results of this work follow (Section 5) and this paper concludes with the conclusions (Section 6) and suggestions for future research in Section 7.

As a product-harm crisis is dangerous for the corporate structure (Stern, 2001) companies should give emphasis on its prevention and confrontation. However, the combating of crises is a complex and difficult procedure. In those situations crucial decisions should be taken within limited time constraint and uncertainty of the outcome (Stern, 2001). Consequently, managers should be well prepared to effectively face the potential crises (Chong, 2004). Results of the present study showed that the time span between the first signals of potential injuries and liability and the date when consumers’ attitudes are measured seems to be a powerful indicator of when the crisis has passed. A few months after the crisis, consumers are more likely to have a more positive impression, to perceive the product as less dangerous, and to be willing to buy a new product from the same company. Consumers’ attitudes are even higher a year after the crisis. Among consumers, the odds of buying a new product from the same company are approximately three times greater a couple of months after the disaster. In the same way, time contributes to perceiving the product as less dangerous (1.74 times greater) and is likely to lead to a generally favorable impression of the harmed company (almost two times greater). As a result, time was found to be the most important factor that influences consumers’ attitudes towards a company that has gone through a crisis. Also, the results of the current study showed that CSR is a crucial factor in the successful dealing with a crisis. Consumers are less likely to perceive a product as danger after the crisis and more likely to form a positive opinion and to make future purchases if the company has demonstrated high levels of social sensitivity. These results are consistent with previous studies’ results, which have shown that high reputation and CSR may protect the company's image in times of crises. Moreover, CSR plays an important role in all three time periods that the study examined. Consumers are more likely to “forget” about a crisis and more like to buy a new product when the company involved in the crisis is socially responsible. Although some studies have demonstrated that the crisis extent affects consumers’ attitudes (Mowen and Ellis, 1981) and the placement of blame (Tedeschi and Nesler, 1993), the current study showed that the extent of a crisis does not play an important role in consumers’ attitudes and reactions. In general, crisis extent could be only used as a predictor of perceived danger of the defeat product. Conversely, severity of crisis was found to influence purchase intentions only in the first time period, i.e., 3 days after the crisis and was also found to influence the perceived danger in the second time period, i.e., 3 months after the crisis. In other words, a severe crisis affects future purchases shortly after the crisis and delays the consumers’ forgetting in a middle period (3 months) after the crisis. As organizational crises can cost millions of dollars in sales or market share, companies should be well prepared to cope with crises. Companies need to have a crisis plan that will go into effect right after the crisis. The plan should be tested regularly so as to ensure that no time will be lost. After the crisis, the voluntary recall of the product (i.e., simple voluntary recall or super effort), may help the company to minimize its losses. The losses could be also decreased if the company already has a socially responsible profile. A few months after the crisis, consumers tend to return to their pre-crisis attitudes towards the company. This evidence could be soothing for companies who believed that crisis consequences are permanent and non-reversible. However, even 3 or 4 months of waiting until the turbulence stops, may be crucial and destructive. Companies should try to accelerate its recovery period by constructing a strong and socially responsible image and by voluntarily recalling the faulty product. The super effort technique could be a shield against profound damages, and also accelerate a smooth and complete recovery.