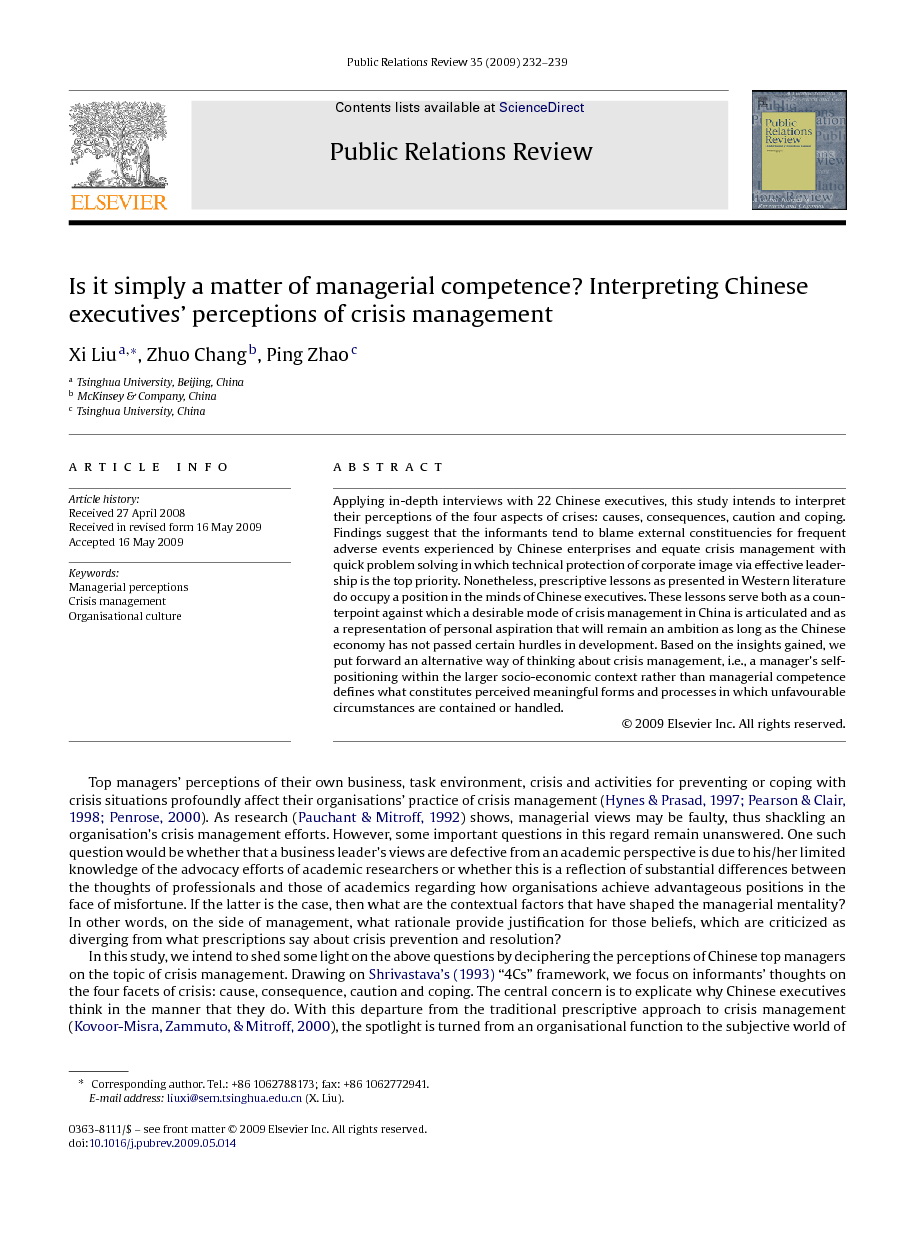 Applying in-depth interviews with 22 Chinese executives, this study intends to interpret their perceptions of the four aspects of crises: causes, consequences, caution and coping. Findings suggest that the informants tend to blame external constituencies for frequent adverse events experienced by Chinese enterprises and equate crisis management with quick problem solving in which technical protection of corporate image via effective leadership is the top priority. Nonetheless, prescriptive lessons as presented in Western literature do occupy a position in the minds of Chinese executives. These lessons serve both as a counterpoint against which a desirable mode of crisis management in China is articulated and as a representation of personal aspiration that will remain an ambition as long as the Chinese economy has not passed certain hurdles in development. Based on the insights gained, we put forward an alternative way of thinking about crisis management, i.e., a manager's self-positioning within the larger socio-economic context rather than managerial competence defines what constitutes perceived meaningful forms and processes in which unfavourable circumstances are contained or handled.

Top managers’ perceptions of their own business, task environment, crisis and activities for preventing or coping with crisis situations profoundly affect their organisations’ practice of crisis management (Hynes and Prasad, 1997, Pearson and Clair, 1998 and Penrose, 2000). As research (Pauchant & Mitroff, 1992) shows, managerial views may be faulty, thus shackling an organisation's crisis management efforts. However, some important questions in this regard remain unanswered. One such question would be whether that a business leader's views are defective from an academic perspective is due to his/her limited knowledge of the advocacy efforts of academic researchers or whether this is a reflection of substantial differences between the thoughts of professionals and those of academics regarding how organisations achieve advantageous positions in the face of misfortune. If the latter is the case, then what are the contextual factors that have shaped the managerial mentality? In other words, on the side of management, what rationale provide justification for those beliefs, which are criticized as diverging from what prescriptions say about crisis prevention and resolution? In this study, we intend to shed some light on the above questions by deciphering the perceptions of Chinese top managers on the topic of crisis management. Drawing on Shrivastava's (1993) “4Cs” framework, we focus on informants’ thoughts on the four facets of crisis: cause, consequence, caution and coping. The central concern is to explicate why Chinese executives think in the manner that they do. With this departure from the traditional prescriptive approach to crisis management (Kovoor-Misra, Zammuto, & Mitroff, 2000), the spotlight is turned from an organisational function to the subjective world of those individuals who play a key role in enacting the function. Based on the insights gained, we put forward an alternative way of thinking about crisis management, i.e., managers’ self-positioning in the larger socio-economic context rather than managerial competence defines what constitutes perceived meaningful forms and processes in which adverse circumstances are contained or handled. In the following presentation, we begin with a brief introduction of theoretical considerations that support a necessary examination of perceptual foundations for the practice of crisis management. We next describe the method of data collection followed by a presentation of the findings. In our discussion, we consider why normative approaches to crisis management seem to be admirable in the eyes of Chinese executives and yet fail to strike a chord when connected to the real battles on the ground in China. In our conclusion, we address the implications of our study and its limitations. At the outset, it is useful to clarify the reason for the treatment of the concept of organisational crisis in this research. There are two broad types of organisational crisis identified in the literature. The first type consists of “a low-probability, high-impact event that threatens the viability of the organisation and is characterized by ambiguity of cause, effect, and means of resolution, as well as by a belief that decisions must be made swiftly” (Pearson & Clair, 1998, p. 60). Researchers (e.g., Coombs, 1999, Coombs and Holladay, 1996, Lerbinger, 1997 and Pearson and Clair, 1998) further classify events that fit this definition into more specific smaller categories such as disasters, accidents and rumour, to name a few. While the exact number of categories varies, each categorisation reflects a similar focus on a sudden incident. The second type of crisis, termed “lingering crisis” by DeVries and Fitzpatrick (2006), refers to a series of events occurring over an extended timeframe causing substantial damage to an organisation through the loss of stakeholder support. In this study, we did not commit to the examination of either of the two types of crisis prior to the field interviews. We also did not specify to the informants which category of unexpected events to address in the process of data collection. This decision was a necessary choice that fit with the exploratory nature of the study. The broad issue taken here is the perceptual ground of crisis management. The main concern is to reveal the underlying contextual factors at a socio-cultural level. To echo Adler and Adler (1998) and Altheide and Johnson (1998), given the scarcity of research on the focal phenomenon, it would be more appropriate to maintain an emergent perspective in order to generate insights on the nature of the phenomenon that is yet to be theorized. In the naturalistic tradition (Lincoln & Guba, 1985) that values the definition of the situation (Hammersley, 1992), a faithful account of the crisis categories evoked in informants by the general term of crisis management and the interpretation of how informants consider coping with such events may be more informative than findings on any single pre-determined crisis type.

In this exploratory study, we attempted to examine managers’ perceptual world related to the function of crisis management. We achieved this aim through investigating what Chinese top executives think of the four aspects of crisis, i.e., cause, consequence, caution and coping. Interpretation of the qualitative data broadens the context of managerial rationalisations as to how the management of unfavourable situations should unfold: perceived social expectations for the whole leadership class rather than managerial competence at the individual level define what constitutes meaningful or appropriate managerial behaviours in the face of crisis events. This study contributes to the field of crisis management in at least one way. There has been the consensus in the Western academic community that faulty reasoning on the part of decision makers partially explains unsuccessful crisis management. This study, however, placed the focus of examination not on the correction of the faulty managerial beliefs, but on dissecting their social–cultural roots. In doing so, it has brought into perspective business leaders as individuals with cultural baggage rather than professionals needing to be equipped with modern managerial competence. This interpretive cultural approach reveals that prescriptive lessons presented in Western literature occupied a position in the minds of Chinese executives. It also served both as a counterpoint against which a desirable mode of coping with adverse circumstances in China is articulated, and as a representation of personal aspiration that will remain an aspiration as long as the Chinese economy does not pass the hurdles of development. While this particular interpretation itself may not directly apply to other national contexts, the framework of understanding that it demonstrates, and in particular, the identified tension and dynamics between reality and ambition can apply to similar managerial settings in order to advance basic insights (Lincoln & Guba, 1985) on the diffusion of normative principles or ideas on crisis management.