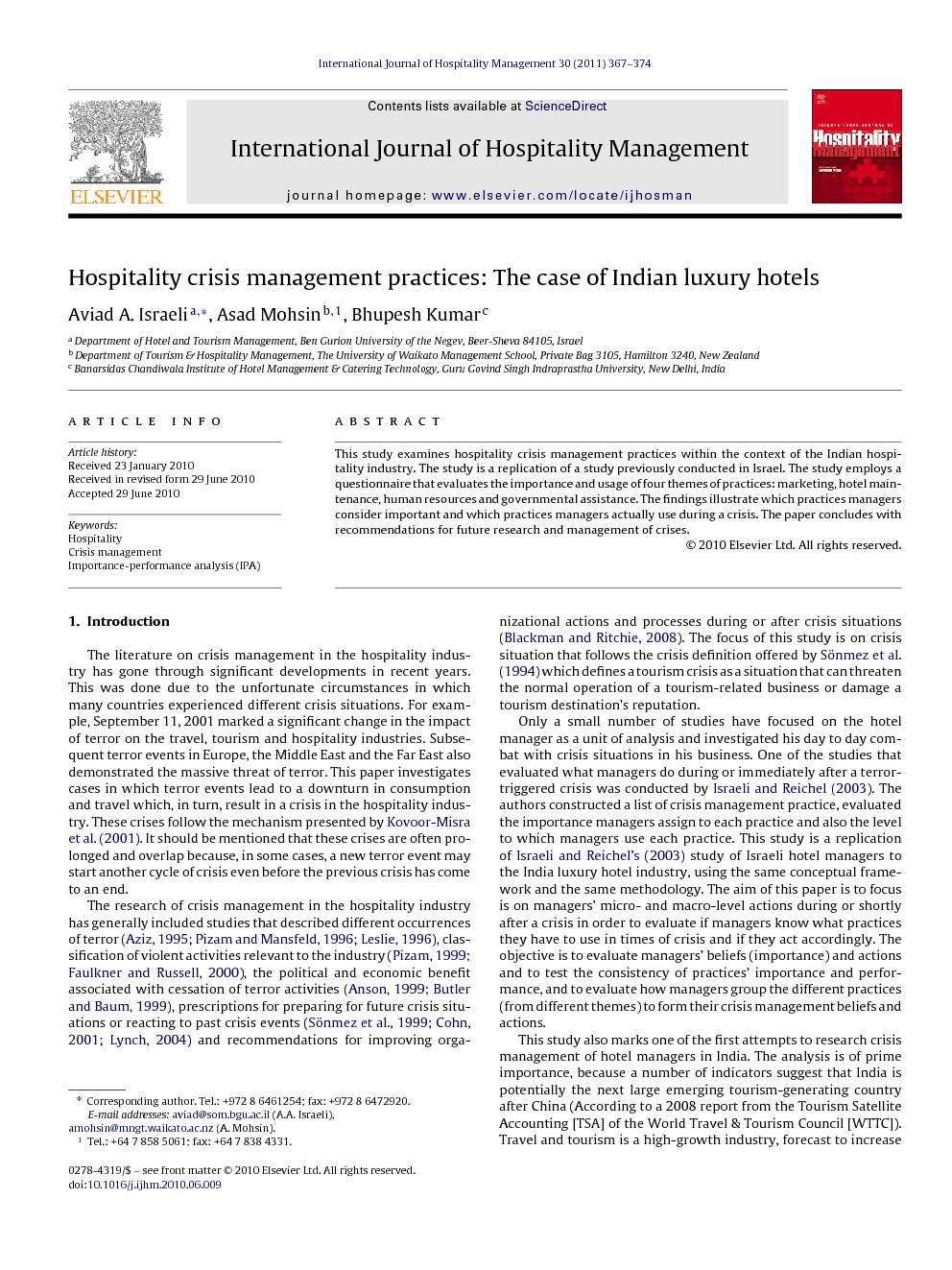 This study examines hospitality crisis management practices within the context of the Indian hospitality industry. The study is a replication of a study previously conducted in Israel. The study employs a questionnaire that evaluates the importance and usage of four themes of practices: marketing, hotel maintenance, human resources and governmental assistance. The findings illustrate which practices managers consider important and which practices managers actually use during a crisis. The paper concludes with recommendations for future research and management of crises.

The literature on crisis management in the hospitality industry has gone through significant developments in recent years. This was done due to the unfortunate circumstances in which many countries experienced different crisis situations. For example, September 11, 2001 marked a significant change in the impact of terror on the travel, tourism and hospitality industries. Subsequent terror events in Europe, the Middle East and the Far East also demonstrated the massive threat of terror. This paper investigates cases in which terror events lead to a downturn in consumption and travel which, in turn, result in a crisis in the hospitality industry. These crises follow the mechanism presented by Kovoor-Misra et al. (2001). It should be mentioned that these crises are often prolonged and overlap because, in some cases, a new terror event may start another cycle of crisis even before the previous crisis has come to an end. The research of crisis management in the hospitality industry has generally included studies that described different occurrences of terror (Aziz, 1995, Pizam and Mansfeld, 1996 and Leslie, 1996), classification of violent activities relevant to the industry (Pizam, 1999 and Faulkner and Russell, 2000), the political and economic benefit associated with cessation of terror activities (Anson, 1999 and Butler and Baum, 1999), prescriptions for preparing for future crisis situations or reacting to past crisis events (Sönmez et al., 1999, Cohn, 2001 and Lynch, 2004) and recommendations for improving organizational actions and processes during or after crisis situations (Blackman and Ritchie, 2008). The focus of this study is on crisis situation that follows the crisis definition offered by Sönmez et al. (1994) which defines a tourism crisis as a situation that can threaten the normal operation of a tourism-related business or damage a tourism destination's reputation. Only a small number of studies have focused on the hotel manager as a unit of analysis and investigated his day to day combat with crisis situations in his business. One of the studies that evaluated what managers do during or immediately after a terror-triggered crisis was conducted by Israeli and Reichel (2003). The authors constructed a list of crisis management practice, evaluated the importance managers assign to each practice and also the level to which managers use each practice. This study is a replication of Israeli and Reichel's (2003) study of Israeli hotel managers to the India luxury hotel industry, using the same conceptual framework and the same methodology. The aim of this paper is to focus is on managers’ micro- and macro-level actions during or shortly after a crisis in order to evaluate if managers know what practices they have to use in times of crisis and if they act accordingly. The objective is to evaluate managers’ beliefs (importance) and actions and to test the consistency of practices’ importance and performance, and to evaluate how managers group the different practices (from different themes) to form their crisis management beliefs and actions. This study also marks one of the first attempts to research crisis management of hotel managers in India. The analysis is of prime importance, because a number of indicators suggest that India is potentially the next large emerging tourism-generating country after China (According to a 2008 report from the Tourism Satellite Accounting [TSA] of the World Travel & Tourism Council [WTTC]). Travel and tourism is a high-growth industry, forecast to increase its total economic activity by 4% worldwide in real terms over the next 10 years (WTTC, 2008). In India, the travel and tourism economy is expected to grow by 7.6% per annum in real terms between 2009 and 2018. According to ACNielson ORG-MARG (2008) report, the hotel industry in India is experiencing rapid growth, particularly in the luxury hotels category. Several international hotel chains such as Six Continents, Carlson Hospitality and Marriott are looking to increase their number of rooms in India. Other chains including Sheraton, Le Meridien and Westin and Accor have a presence in the country, not to mention local chains such as Oberoi, Taj and Jaypee Hotels. The report further suggests that in 2010, 62% of the demand would be in classified according to quality themes and 53% of the total classified demand would be in the Luxury category. The Luxury category according to the Indian Ministry of Tourism includes 5-star deluxe, 5- and 4-star hotels and Heritage Hotels (ACNielson ORG-MARG, 2008). Such promising growth and earnings from national and international tourism faces threats from terrorism, which has been seriously impacting the tourism industry worldwide. The examples of the 9/11 attack in the USA, Bali bombing in Indonesia, attacks on tourists in Egypt and the Mumbai terrorist attacks of 26/11 on luxury hotels generated international attention and served as a poignant reminder of the impact terror can have on the tourism and hotel industry.