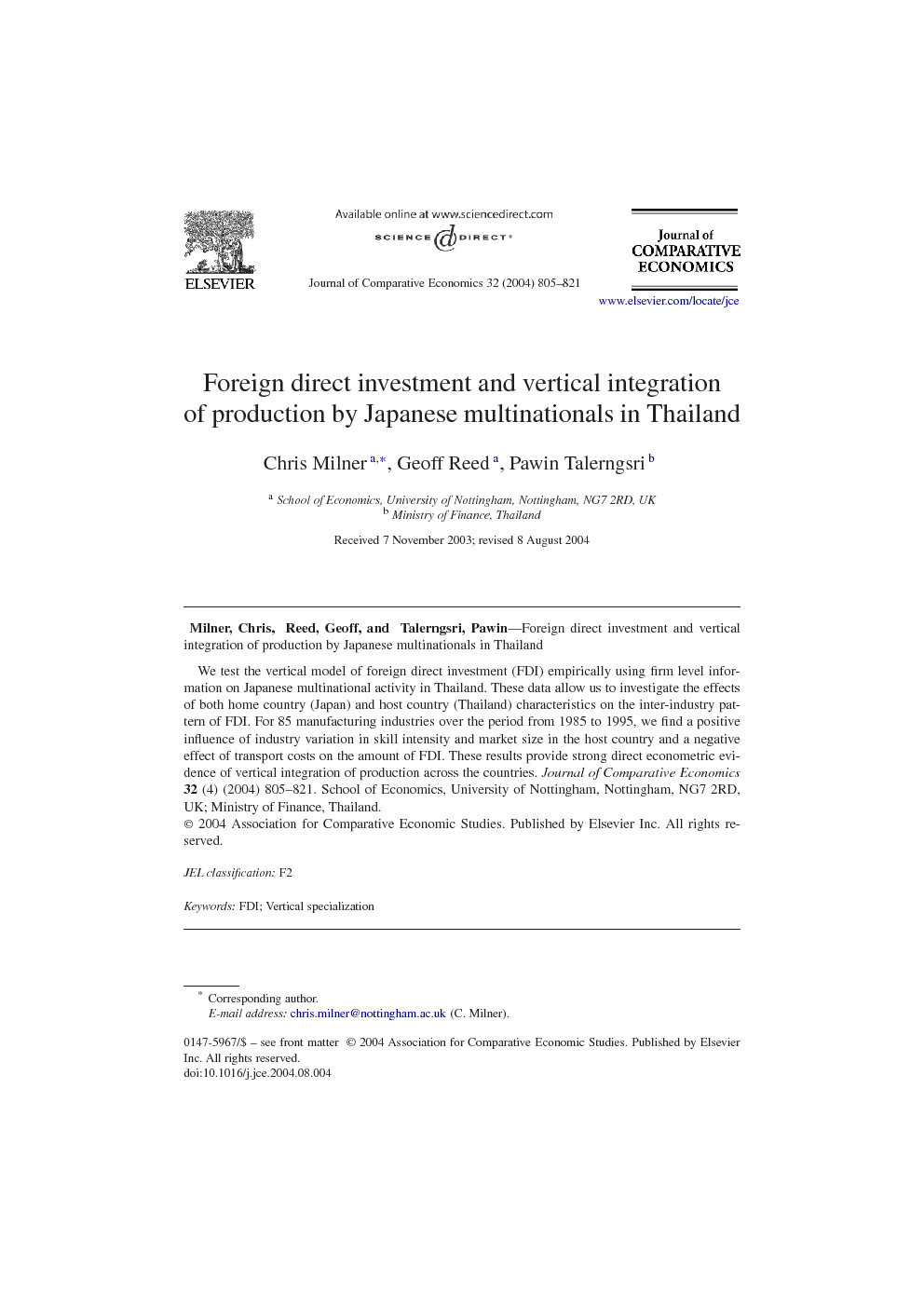 We test the vertical model of foreign direct investment (FDI) empirically using firm level information on Japanese multinational activity in Thailand. These data allow us to investigate the effects of both home country (Japan) and host country (Thailand) characteristics on the inter-industry pattern of FDI. For 85 manufacturing industries over the period from 1985 to 1995, we find a positive influence of industry variation in skill intensity and market size in the host country and a negative effect of transport costs on the amount of FDI. These results provide strong direct econometric evidence of vertical integration of production across the countries. Journal of Comparative Economics32 (4) (2004) 805–821.

Only a small portion of the empirical literature on the determinants of foreign direct investment (FDI) in developing countries including from Japan, e.g. Fung et al. (2002), focuses on factors that influence the inter-industry distribution of FDI Lall and Mohammad, 1983 and Aswicahyono and Hill, 1995. Data on FDI are often poor or limited in coverage and cross-industry information on structural and policy characteristics is usually not available. This paper addresses the specific case of Japanese FDI in Thailand, in which differences in host and home country characteristics lead us to expect to find vertical multinationals. By concentrating on these two countries, we are able to construct a data set that includes industrial characteristics from both countries. We produce three alternative measures of Japanese investment in Thailand across 85 manufacturing industries based on information compiled from company-level data. These micro-level data allow us to investigate directly the factors determining inter-industry variation in FDI in an industrializing country. Figure 1 records the number of Japanese firms that operated in different manufacturing sectors in Thailand in 1995 and distinguishes between those established before 1986 and those established throughout the period from 1954 to 1995. The number of firms established after 1985 in the post-import substitution development stage in Thailand has increased by 805 from a total of 156. In addition, intensification of the concentration of this inward investment in specific sectors is obvious from the figure. Before 1986, 64 (41%) of the firms were located in the classification ISIC 38, which consists of fabricated metals, machinery and equipment. By 1995, this number had grown to 422 firms or 52% of the Japanese companies in Thailand. Interestingly, a similar level and pattern of concentration emerges in Thailand's trade with Japan. Non-electrical and electrical machinery, vehicles, and iron and steel accounted for about 80% of Thailand's imports from Japan in 1989. Full-size image (20 K) Fig. 1. The number of Japanese companies operational in Thailand's manufacturing sector. Figure options FDI in industrialized countries tends to be horizontally integrated and aimed at servicing the local market. Evidence suggests that inward investment is motivated mainly by the advantages of proximity to the host market in addition to policy barriers to trade or incentives provided by host governments, e.g. Markusen (1995). By contrast, FDI in developing and industrializing countries is more likely to be vertically integrated and designed to take advantage of differences in factor endowments between countries, e.g. Helpman (1984) and Zhang and Markusen (1999).1 In this paper, we assume that internalization advantages have already motivated home firms to retain control of different stages of production rather than outsourcing through arms-length transactions with separate firms. We focus on the locational choices at different stages of the production process and emphasize the locational advantages of the host economy.2 These advantages affect the relative profitability of a potential host and the amount of production shifted from the home to the host country. The theoretical literature on vertical FDI, e.g. Helpman and Krugman (1985), is based on the division of labor and a refinement of the conventional Heckscher–Ohlin framework. Hence, vertical FDI occurs because of inter-country differences in factor endowments that provide incentives to locate skilled-labor-intensive phases of operation in a relatively skilled-labor-abundant country and unskilled phases in a correspondingly suitable national location. The vertical multinational enterprise in a developed country is considered to produce knowledge-intensive services, including head-office functions, and possibly skill-intensive intermediate inputs at home, while it supplies services and intermediates to the subsidiary in the lower wage developing country. However, the tendency for FDI not to flow to countries with greater labor-abundance or to the lowest wage economies led to refinements of the literature, e.g. Markusen and Venables (1997), to account for the fixed costs of investing abroad. Such costs may be direct, e.g. complementary labor inputs such as managers and engineers, or indirect, e.g. social infrastructure costs. The early literature predicted either horizontal FDI, e.g. Markusen (1984), or vertical FDI, e.g. Helpman (1984), with no factor price motivation for FDI in the former and no tariff jumping incentive in the latter. Subsequently, Markusen et al. (1996) allow both horizontal and vertical FDI to emerge endogenously as country costs and the level of trade costs vary. Carr et al. (2001) and Blonigen et al. (2003) test these later models empirically. However, all earlier models are concerned fundamentally with explaining inter-country variation in the levels of FDI rather than inter-industry variation in actual FDI. In what follows, we do not test a specific model of vertical FDI but rather draw on the general literature to motivate our empirical analysis.

In this paper, we test empirically the ability of the vertically-integrated model to explain Japanese direct investment in manufacturing industries in Thailand. Hypotheses from this model about the labor intensity of production and market size in the home economy and about the role of transport costs between the home and host economies are central to the present analysis. In addition, we include host country policy incentives. The data set consists of industry-level data, constructed from firm-level information. For both cross-section and pooled estimates, we find consistent support for the vertical FDI model as an explanation of both the variation and the amount of Japanese FDI across Thai manufacturing activities. Although the proxy measures of both the dependent and independent variables have some limitations, we can draw fairly strong conclusions from our empirical findings. Japanese FDI in Thailand is generally of a vertically integrated nature; investors seek to avoid higher labor costs in the home production base for part of the production process by producing in Thailand and exporting back home. Lower costs of transportation facilitate trading activities among parent firms in Japan and their affiliates in Thailand. Policy and endowment factors also have important effects on both the probability and the amount of Japanese FDI across Thai manufacturing industries. Japanese firms seek to take advantage of both the US preferential trade policy towards Thailand and fiscal incentives granted by the Thai government. Whether the investments would occur without these incentives is not discernible from the estimated model. However, many other locations in South East Asia offer cheap labor and similarly favorable transport costs and access to markets but do not have such a favorable policy environment. Using firm-level data on Japanese multinationals, Head and Ries (2002) find evidence of increased purchases of assembled finished goods from lower-income countries and of skill-upgrading effects back in Japan. In this paper, we provide direct evidence of the ability of the vertical FDI model to explain inter-industry variation in Japanese FDI to a lower-income country.