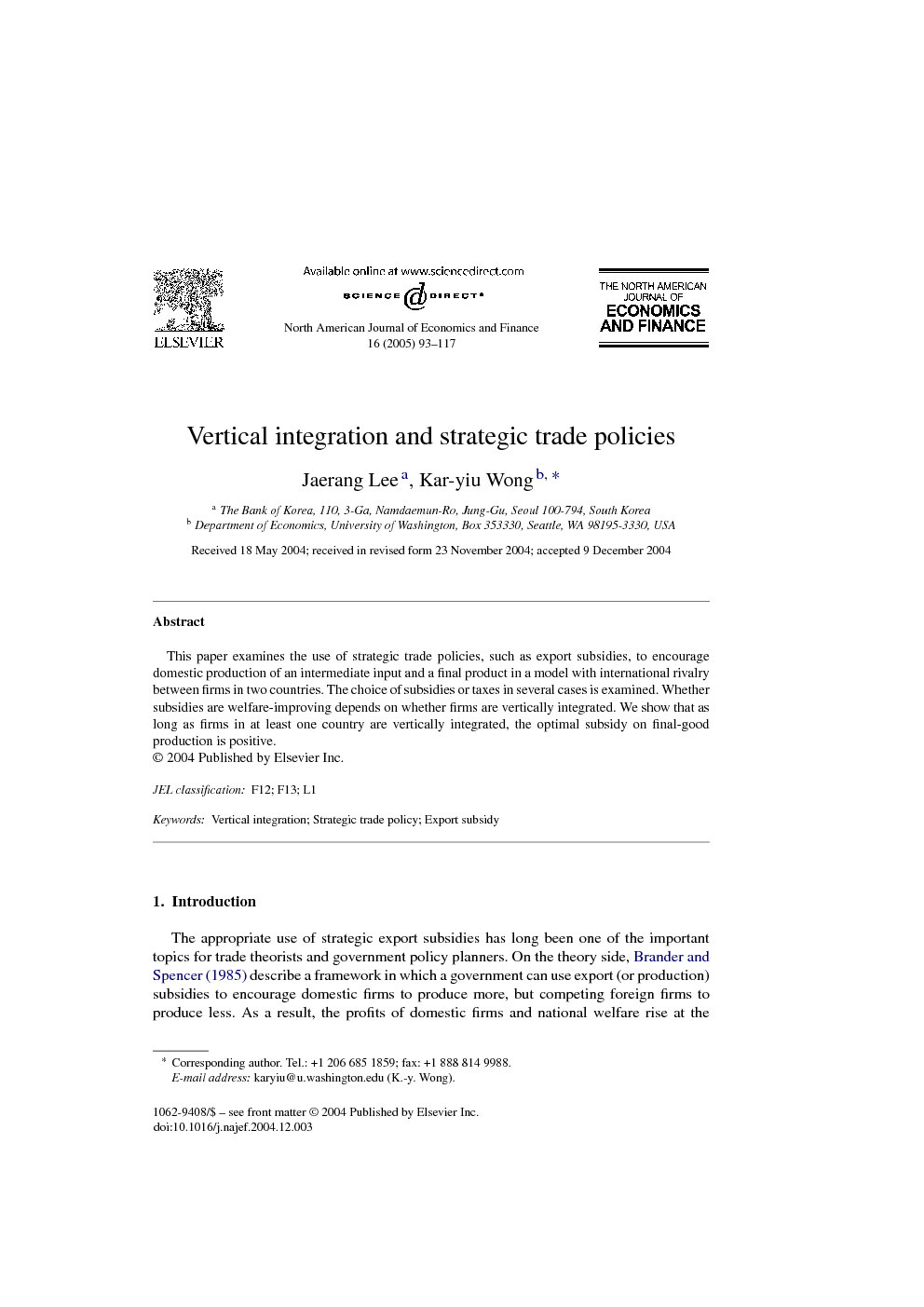 This paper examines the use of strategic trade policies, such as export subsidies, to encourage domestic production of an intermediate input and a final product in a model with international rivalry between firms in two countries. The choice of subsidies or taxes in several cases is examined. Whether subsidies are welfare-improving depends on whether firms are vertically integrated. We show that as long as firms in at least one country are vertically integrated, the optimal subsidy on final-good production is positive.

The appropriate use of strategic export subsidies has long been one of the important topics for trade theorists and government policy planners. On the theory side, Brander and Spencer (1985) describe a framework in which a government can use export (or production) subsidies to encourage domestic firms to produce more, but competing foreign firms to produce less. As a result, the profits of domestic firms and national welfare rise at the expense of foreign firms’ profits and foreign economic welfare. It has also been pointed out by other economists, that the results in Brander and Spencer (1985) are sensitive to some of the assumptions in their framework. Once these assumptions are relaxed, the optimal policy could be an export tax.1 In the real world, governments have recognized that widespread use of export subsidies could be disruptive and could hurt their economies. As a result, members of the World Trade Organization (WTO) signed agreements to prohibit the use of government subsidies to promote the trade performance of domestic industries. Despite the concerns in the theory and the prohibition of the use of trade-promoting subsidies, the discussion about strategic export subsidies is still very alive. This is partly due to the existence of many policies that are under disguised names, but have trade-promoting effects, and partly due to the existence of many trade disputes concerning the use of strategic export subsidies.2 There are still quite a number of issues involving possible use of export subsidies that have not been fully addressed. One issue is the existence of intermediate inputs. In the Brander–Spencer model, only a final product is considered, and only primary factors are used in the production process. This simplification is a convenience in the theoretical work, but not too close to the real world, in which many industries do use not only primary factors but also intermediate inputs. This fact of course has long been recognized, and recently there have been a rising number of papers analyzing various issues involving intermediate inputs and trade policies.3 To see the importance of intermediate inputs, let us consider the computer industry.4 Computer is a final product, using primary factors (such as labor and capital) and intermediate inputs (such as computer chips). Both computers and computer chips are tradable, with major firms in some countries producing computer chips, such as Samsung in Korea, Micron Technology in the United States, and Infineon in Germany, and important producers in some countries producing computers; for example, Samsung in Korea and Hewlett Packard in the United States.5 Consider a country like Korea, and suppose that her government attempts to promote trade to improve her national welfare. A subsidy on the production of computers most likely will have the type of profit-shifting effect in the final-product industry suggested by Brander and Spencer (1985). However, the subsidy will increase the demand for computer chips, and that could benefit foreign computer chip producers and hurt the local ones. Thus, whether the optimal subsidy is positive is not clear. Similarly, if a subsidy is imposed on the local production of computer chips, while the local chip producers may benefit because of the profit-shifting effect, the drop in the chip price may simultaneously benefit the foreign computer producers possibly at the expense of local computer producers. Then what is the optimal subsidy?6 The purpose of the present paper is to determine the optimal subsidies on final-good and intermediate-input production. We argue that such linkage and thus the optimal subsidies depend on whether the final-good and intermediate-input industries in the same country are vertically integrated (as in the case of Samsung in Korea) or not (as in the case of Micron Technology and Hewlett–Packard in the United States). The paper considers four different cases, depending on whether the local final-good and intermediate-input industries and the foreign counterparts are integrated. We derive the optimal subsidies and examine whether they are positive.7Rodrik and Yoon (1995) show that optimal subsidies may not be positive in the presence of economies of scale. The present paper argues that optimal subsidies may not be positive even if economies of scale are absent. The rest of the paper is organized as follows. Section 2 describes the features of a basic model, in which there are two countries, each with a local firm producing an intermediate input and a local firm producing a final good. These two industries are vertically integrated if the two firms within a country merge and produce both intermediate input and final good. Sections 3, 3.1, 3.2, 3.3, 4, 4.1, 4.2, 4.3, 5, 5.1, 5.2, 5.3 and 6 consider four separate cases: one with no vertical integration in either country; one with vertical integration in the home country only; one with vertical integration in the foreign country only; and one with vertical integration in both countries. The last section concludes.