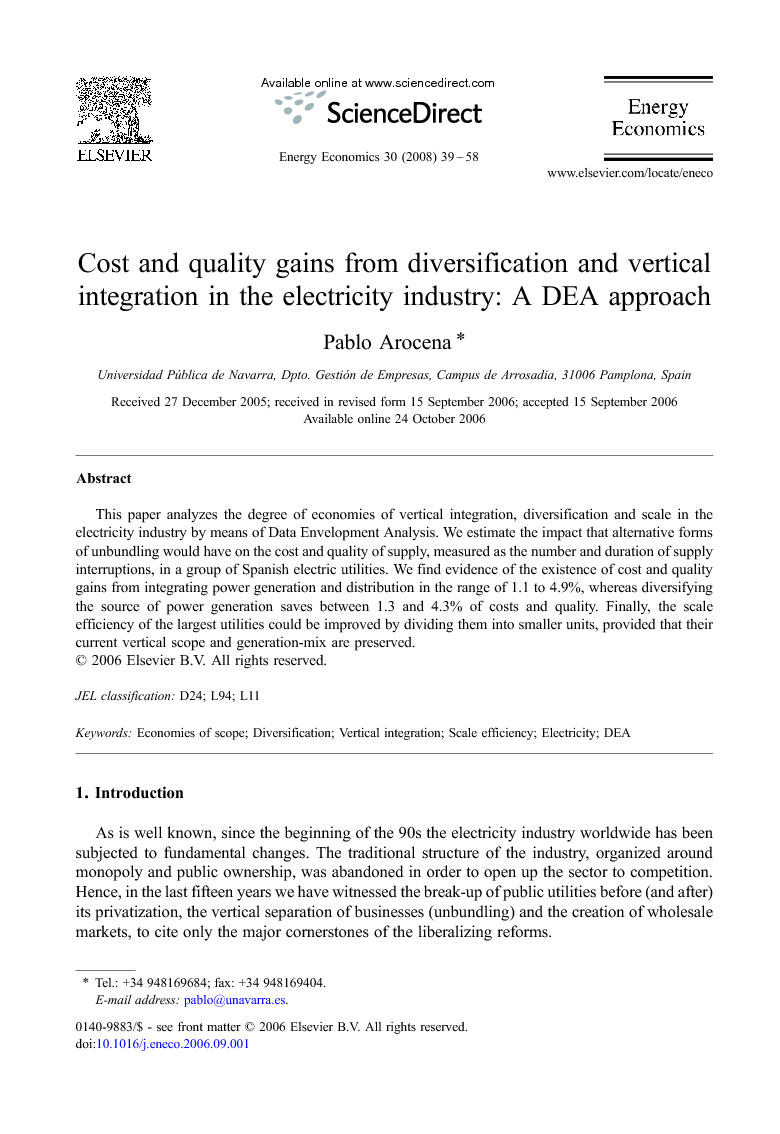 This paper analyzes the degree of economies of vertical integration, diversification and scale in the electricity industry by means of Data Envelopment Analysis. We estimate the impact that alternative forms of unbundling would have on the cost and quality of supply, measured as the number and duration of supply interruptions, in a group of Spanish electric utilities. We find evidence of the existence of cost and quality gains from integrating power generation and distribution in the range of 1.1 to 4.9%, whereas diversifying the source of power generation saves between 1.3 and 4.3% of costs and quality. Finally, the scale efficiency of the largest utilities could be improved by dividing them into smaller units, provided that their current vertical scope and generation-mix are preserved.

As is well known, since the beginning of the 90s the electricity industry worldwide has been subjected to fundamental changes. The traditional structure of the industry, organized around monopoly and public ownership, was abandoned in order to open up the sector to competition. Hence, in the last fifteen years we have witnessed the break-up of public utilities before (and after) its privatization, the vertical separation of businesses (unbundling) and the creation of wholesale markets, to cite only the major cornerstones of the liberalizing reforms. Nevertheless, soon after liberalization it was made evident that the scope of such structural reforms in some countries was insufficient to guarantee a competitive market performance. Basically, the problems arose because of the excessive market concentration, where major incumbents enjoyed substantial market power. To remedy such anticompetitive behavior, some regulatory authorities promoted the further partition of large firms in smaller units and thereby increasing the number of competitors. Thus, the British electricity regulator required the two major generators (privatized some years before) successive plant divestments in order to improve the efficiency of the wholesale power market (OFFER, 1994 and OFFER, 1998). In California, and other US States, financial incentives were introduced (e.g. higher allowed rate of return) to induce divestiture of 50% of the fossil-fuel generation assets owned by the largest utilities. In the same vein, the European Commission has followed a similar strategy in its recent decisions on problematic mergers by adopting policies that encourage entry and promote structural remedies (e.g. divestiture of upstream or downstream assets). For example the acquisition of German electricity company EnBW by Electricité de France was approved subject to the divestment of 6000 MWs of generation capacity located in France (EC, 2001). Parallel to the pro-competitive dimension of the structural reforms, it is often claimed that there exist some cost advantages associated to vertical and horizontal integration because of the technological interdependencies between stages and the use of common inputs. Hence, the (technically) efficient number of firms as well as their degree of vertical integration depends on the magnitude of the economies of scale and scope. If scale and horizontal diversification economies are limited or negligible, the break-up of large firms in smaller units will have a positive effect in reducing market power without damaging the costs of the resulting firms. On the contrary, if such economies are significant, the partition will lead to efficiency losses and cost increases that could eventually counterweight the benefits derived from a more competitive functioning of the market. A similar argument applies to the vertical scope of the firm. If power could be efficiently supplied by means of specialized firms competing in their respective stages of the business, vertical separation could help to increase the competitive pressure in the market without cost penalties. Conversely, if vertical or scope economies across stages are substantial, potential benefits of unbundling could be counterbalanced by the loss of productive efficiency. Hence, defenders of large firms and vertical integration allude to the significance of economies of scope and scale, while advocates of unbundling and divestiture remark the benefits of competition and deregulation. Therefore, as Pittman (2003) points out, the estimation of such economies has important policy implications on further restructuring, not only for the electricity industry but also for other infrastructure sectors (e.g. gas, water, railways). However, while a great deal of attention has been paid to the competitive effects of restructuring and divesting policies (e.g. Green, 1996 and Day and Bunn, 2001, among others), the analysis of its potential costs in terms of productive efficiency losses has devoted considerable less attention in the literature. The estimation of integration economies in the electricity industry is therefore a topic of unquestionable interest. Nevertheless, since the pioneering work by Kaserman and Mayo (1991) only a small bunch of studies addressed this question over the 1990s (Gilsdorf, 1994, Gilsdorf, 1995, Lee, 1995 and Hayashi et al., 1997). Even though the topic has seen a revived interest in recent years (e.g. Kwoka, 2002, Nemoto and Goto, 2004, Jara-Díaz et al., 2004 and Fraquelli et al., 2005), the empirical evidence is still scarce. This paper contributes to this literature in two ways. First, while earlier studies estimate some form of multioutput cost function to calculate vertical and horizontal economies in the electricity industry, in this paper we estimate these economies by means of linear programming techniques based on Data Envelopment Analysis (DEA). Secondly, previous work exclusively focuses on the analysis of potential cost savings resulting from scope and scale economies. As a novelty, we also take into account the potential gains in the quality of supply resulting from vertical integration, diversification at the generation stage and the scale of operations. We compute then the cost and quality gains that would be expected from alternative partitions of a group of Spanish utilities. The paper is organized as follows. Section 2 reviews the basic definitions of scope, diversification and scale economies. Section 3 describes some methodological aspects. Section 4 introduces the quality issues in the measurement of the economies of integration. Section 5 presents data and variables, while results are displayed in Section 6. Final section summarizes the empirical results and makes conclusions.

This paper has estimated the economies of diversification and vertical integration in the Spanish electricity industry by means of Data Envelopment Analysis. We have analyzed the impact that alternative fragmentation of firms would have on total costs, as well as on the quality of service. Our results may be summarized as follows: (i) We find that scope economies between generation and distribution are in the range of 1.1% to 4.9%; (ii) Diversification in power generation is particularly advantageous when quality of supply is seek to be maximized. Thus, the eventual horizontal specialization at the generation stage would both increase utilities total costs and the interruptions of supply between 1.3% and 4.3%; (iii) Economies of scale are not important provided that vertical scope and product-mix are preserved. Further, the scale efficiency of largest firms could be improved up to by dividing them into smaller units. Regardless of the figures, our results provide further evidence of the existence of cost and quality gains derived from vertical and horizontal integration, which has important policy implications for the restructuring of the electric power sector. Thus, any break-up of firms implying the complete vertical disintegration and/or firm's specialization on the generation stage is expensive in terms of cost efficiency and quality losses. Putting differently, unbundling and divestiture may be costly. Therefore, the expected competitive gains of such partition should be compared with the sacrifice of vertical and horizontal economies. The liberalizing measures carried out in Spain since the end of 1997 illustrate such a tradeoff. As a part of the reform, the Spanish Electricity Act established vertical separation between competitive and non-competitive activities in the form of legal and accounting separation.12 This means that distribution and generation activities have to be incorporated as different companies but can still be jointly owned through a holding company, which implies, in fact, no significant separation between the generation and distribution activities. Further, in the run up to liberalization Endesa transformed itself from a pure generator into a vertically integrated electricity company by acquiring many of the existing distributors. Simultaneously, as a result of the mergers and acquisitions the sector was organized around four groups: Endesa, Iberdrola, Unión Fenosa and HidroCantábrico, making the Spanish market one of the most concentrated liberalized markets in the world, where the two dominant players, Endesa and Iberdrola, have together a market share of roughly 75%. It seems clear that while the design of the regulatory reform permitted to take full advantage of the diversification and vertical integration gains, it failed in the creation of a market structure sufficiently competitive. Further, according to Pérez-Arriaga (2005), author of the White Book for the Regulatory Reform of the Electricity Generation in Spain, a report commissioned by the Spanish Ministry of Industry and Energy, the degree of market power derived from the high level of vertical and horizontal concentration is still today considered the main obstacle for the competitive functioning of the electricity market. Hence, it has been repeatedly claimed that further structural changes are essential for developing effective competition in the Spanish electricity market. In this respect, this paper provides guidance to the policy makers before undertaking any divestiture process. Particularly, our results suggest that the partition of the largest firms would be rational on the grounds of economic efficiency, provided that the current vertical and horizontal output proportions are preserved. Thus, in addition to the likely benefits derived from the creation of a higher number of competitors, the combined cost of the constituent smaller firms would be lower than the cost of the larger firms because of the improvement in their scale efficiency, without lessening the quality of supply.