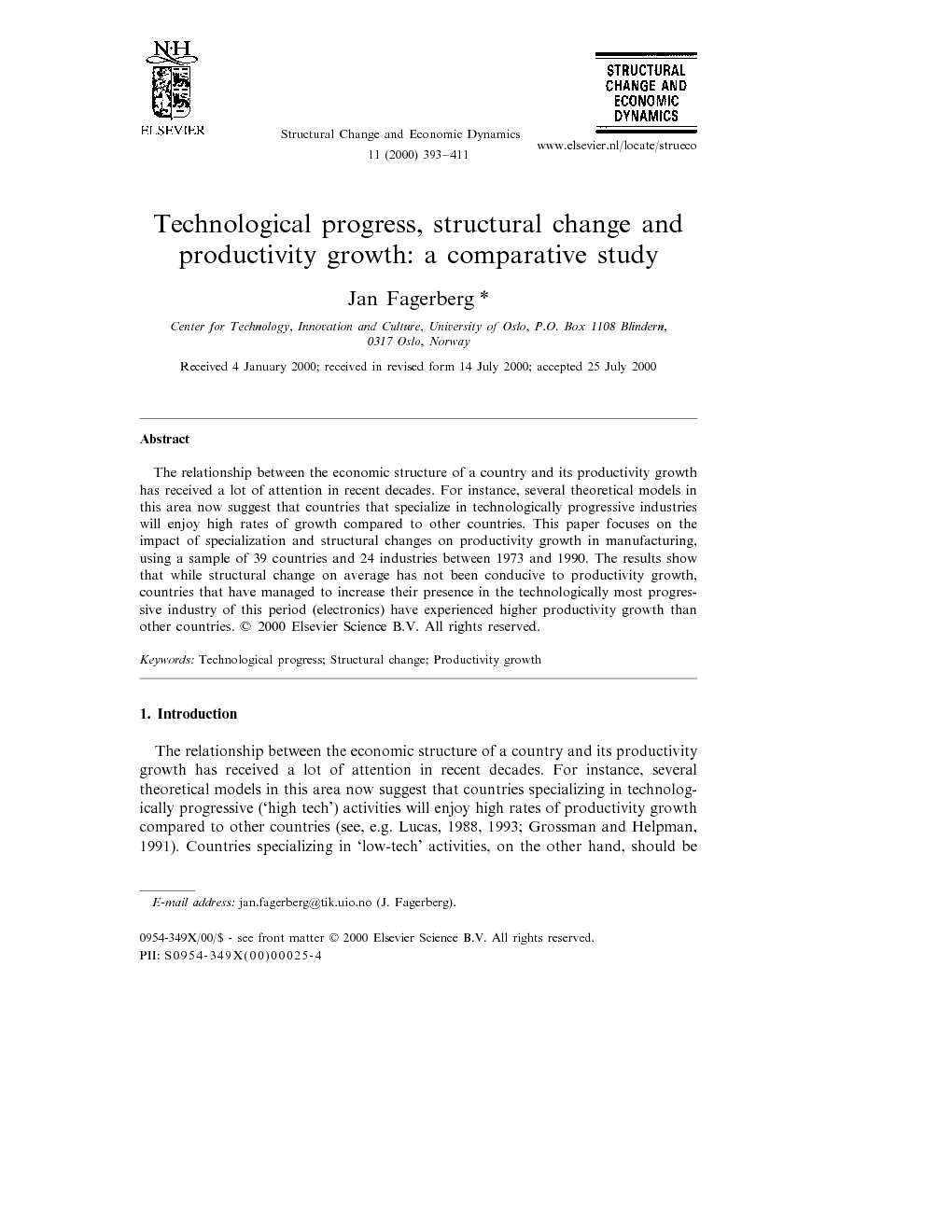 The relationship between the economic structure of a country and its productivity growth has received a lot of attention in recent decades. For instance, several theoretical models in this area now suggest that countries that specialize in technologically progressive industries will enjoy high rates of growth compared to other countries. This paper focuses on the impact of specialization and structural changes on productivity growth in manufacturing, using a sample of 39 countries and 24 industries between 1973 and 1990. The results show that while structural change on average has not been conducive to productivity growth, countries that have managed to increase their presence in the technologically most progressive industry of this period (electronics) have experienced higher productivity growth than other countries.

The relationship between the economic structure of a country and its productivity growth has received a lot of attention in recent decades. For instance, several theoretical models in this area now suggest that countries specializing in technologically progressive (‘high tech’) activities will enjoy high rates of productivity growth compared to other countries (see, e.g. Lucas, 1988, Lucas, 1993 and Grossman and Helpman, 1991). Countries specializing in ‘low-tech’ activities, on the other hand, should be expected to have relatively slow productivity growth. In a globalized world, this may not imply slower growth in welfare in the latter as long as differences in productivity growth are fully reflected in prices. However, if producers of high-tech products are able to keep most of the rewards from faster technological progress to themselves by controlling prices (Reinert, 1993), the prospects for countries specialized in low-tech may be rather bleak. In such a case, it may pay off for a country to change its pattern of specialization towards more promising areas through policy intervention, as suggested by Lucas (1988). Despite the growing interest, and the novelty of some recent modeling efforts, this is not a new line of research. Arguably, the idea that the economic structure — and changes in this pattern — matters for growth is as old as economics itself (Reinert, 1993 and Reinert, 1995). Salter (1960), in his now classic work on productivity and technical change, emphasized that the scope for technological progress/productivity advance differ markedly across industries. Hence, ‘a flexible structure of production is an important element in the high rate of productivity increase, for it allows an economy to rapidly redistribute its resources so as to take maximum advantage of changing patterns of technological progress’ (ibid. p. 9). In his empirical analysis of UK productivity growth in the first half of the 20th century he showed that this flexibility, i.e. the ability to undertake structural change, was of great empirical importance: ‘This suggests that structural changes play a role equally important as increases in productivity within individual industries’ (ibid. p. 151). The growth-accounting literature (Denison, 1967 and Chung and Denison, 1976) also emphasized structural change as a major impetus to growth1. However, in contrast to the detailed analysis of Salter, these later studies focused mainly on the shift from agriculture to manufacturing. Consequently, the growth accounting literature has little to say about the possible impact of specialization and structural change within manufacturing on productivity growth. This holds also for the more recent exercises in this tradition (e.g. Young, 1995). This paper focuses on the relationship between specialization, structural change and productivity growth in manufacturing in recent decades. The perspective is similar to that of Salter in the sense that we analyze the manufacturing sector as composed of a number of different industries. However, we share with Denison the comparative approach to studies of economic growth: the present sample includes 39 market economies (on different levels of development), basically all countries within this category for which data are available. The next section presents the data and shows how productivity growth differs across industries and countries. We also analyze the extent to which rapid productivity growth goes hand in hand with low price growth. Then we turn to the relationship between structural change and productivity growth, using both an accounting approach (shift-share methodology) and econometric testing. The final section outlines the main findings and discusses the implications for policy.

This paper has focused on the impact of structural changes on productivity growth in manufacturing. It was inspired by previous findings for the UK in the first half of the 20th century, showing that structural change played a very important role for overall productivity growth. The results reported here, based on a sample of 39 countries between 1973 and 1990, indicate that structural change still matters, but in a different way than before. The main difference concerns the role played by new technologies in generating structural change. In the first half of the 20th century, growth of output, productivity and employment were strongly correlated. Employment in industries based on new technologies (such as electricity and synthetic materials) expanded rapidly at the expense of more traditional industries, implying an important role for structural change in explaining overall productivity growth. More recently this relationship between output, productivity and employment has become more blurred. New technology, in this case the electronics revolution, has expanded productivity at a very rapid rate, particularly in the electrical machinery industry, but without a similarly large increase in the share of that industry in total employment. In fact, the industries that increased their role in total employment most substantially were generally traditional industries — mostly geared towards private consumption — with average to low productivity growth. Hence, in recent decades, new technology has not been linked with structural changes in demand, output and employment in the same way as before. This explains why structural change — in a pure accounting sense — was more important for productivity growth previously than it appears to have been more recently (at least up to 1990). However, this does not mean that the electronics revolution — or the structural changes associated with it — have not been important for overall productivity growth in the period under study here. First, the electrical machinery industry (which is the industry most intimately related to the electronics revolution) has experienced much higher productivity growth than any other industry, implying a growth bonus for countries with a superior performance in this industry. Second, there have been important spillovers to productivity growth in other industries, and available research indicates that these have been stronger at the local or national level than globally. Hence, the results presented in this paper suggest that countries that during the period under study here managed to establish themselves firmly in the electronics industry got a sizeable growth bonus from these investments. This being said, it seems appropriate to issue a warning regarding the possible implications of these findings. First, leading technologies — and the industries most affected — change through time, and so do the conditions for entry and the rewards from it. Thus, the relevant policy conclusion to draw from this is not that every country should move into production of electronics as fast as possible. Rather, the lesson is that there may be important potential gains to overall growth and — possibly — welfare from successful entry in technologically progressive industries that should be taken into account when designing policy. Second, little is said here about what the conditions for such entry were during the period under study or — of even greater importance for policy — are likely to be in the future. Without a clear understanding of these conditions — and how they relate to existing national assets and capabilities — it becomes difficult to discuss policy in a meaningful way. Arguably, these questions deserve a high rank on the future research agenda in this area.