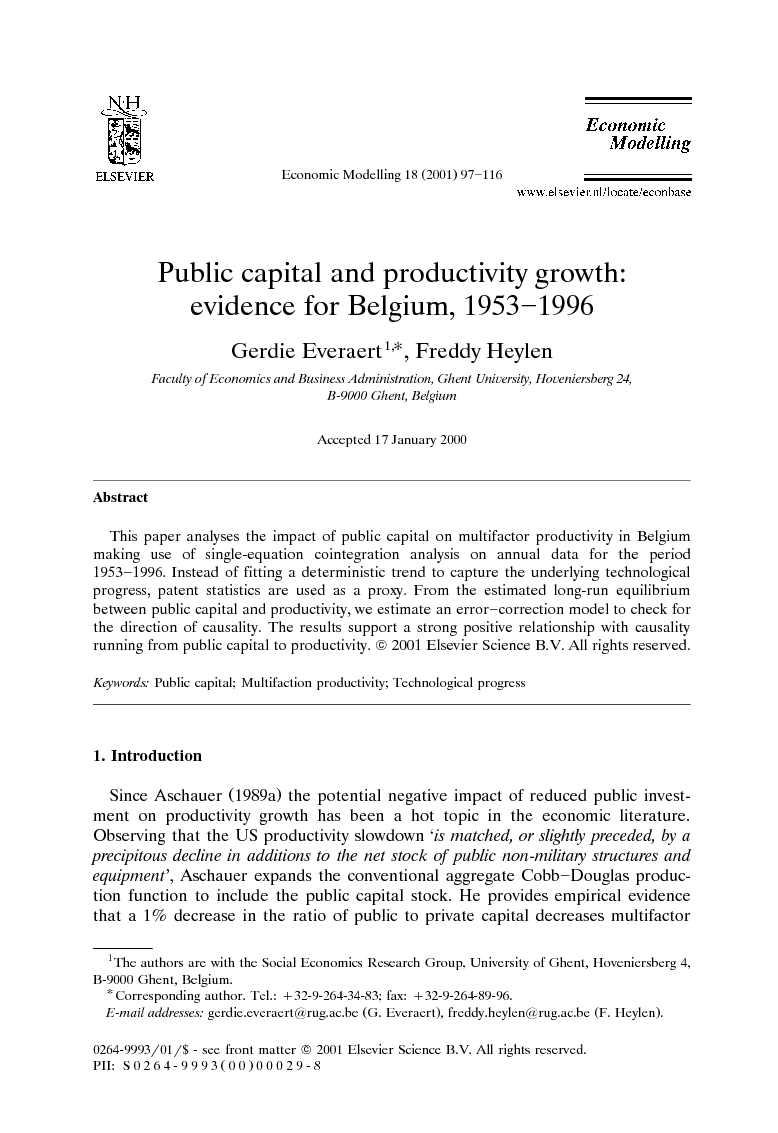 This paper analyses the impact of public capital on multifactor productivity in Belgium making use of single-equation cointegration analysis on annual data for the period 1953–1996. Instead of fitting a deterministic trend to capture the underlying technological progress, patent statistics are used as a proxy. From the estimated long-run equilibrium between public capital and productivity, we estimate an error–correction model to check for the direction of causality. The results support a strong positive relationship with causality running from public capital to productivity.

Since Aschauer (1989a) the potential negative impact of reduced public investment on productivity growth has been a hot topic in the economic literature. Observing that the US productivity slowdown ‘is matched, or slightly preceded, by a precipitous decline in additions to the net stock of public non-military structures and equipment’, Aschauer expands the conventional aggregate Cobb–Douglas production function to include the public capital stock. He provides empirical evidence that a 1% decrease in the ratio of public to private capital decreases multifactor productivity in the US by 0.39%. Taking a panel of seven countries, Aschauer (1989b) shows that this strong, positive correlation continues to hold in a broader sample of countries. Inspired by Aschauer, a large body of empirical research investigating the link between public capital and private sector productivity has arisen.2 Initially, Aschauer's findings were confirmed, see, e.g. Munnell, 1990a and Munnell, 1990b. Later, however, they have come under severe attack for the estimated output elasticity of public capital implied an implausibly high return to public capital (see e.g. Aaron, 1990). The rate of return to core infrastructure implied by Aschauer's (1989a) results equals almost 150%, while Munnell's (1990a) results point to a rate of return to all public capital of approximately 60% (Hurst, 1994). Alarmed by these high figures, a lot of defects in Aschauer's methodology have been identified. The first important problem emerges from the observation that all variables included in the production function show stochastic non-stationary behaviour. The finding of a unit root makes Aschauer's results, derived using level data, suspicious due to possible spurious correlation (see, e.g. Tatom, 1991). Second, it is often argued that the established positive correlation could be evidence that multifactor productivity has a significant positive impact on public capital rather than the other way around, i.e. reverse causation (Eisner, 1991). Third, Hulten and Schwab (1993) argue that a production function is likely to be part of a system in which both input and output variables are endogenously determined. This makes the results from estimating a single-equation production function potentially liable to simultaneous equation bias. Despite the fact that many have identified these important problems, they have not yet been properly taken care of. Using annual data for Belgium over the period 1953–1996, the goal of this paper is to reconsider these problems in a production function approach similar to the one initially applied by Aschauer. However, instead of following the traditional approach of including a linear time trend to capture the underlying technological progress, we use patent statistics as a proxy. To make sure that our results indicate a long-run equilibrium relationship rather than follow from spurious regression, we run cointegration tests drawing on Engle and Granger (1987). Since in a cointegrating framework, standard Granger causality tests are no longer valid, we proceed to analyse the direction of causality by estimating an error–correction model (ECM). In order to check the robustness of our results, we have changed the set-up of the regression analysis in two different ways. First, to correct for possible simultaneous equation bias, we implement the fully modified least squares estimation procedure suggested by Phillips and Hansen (1990). Second, we allow for changes in the construction of public capital stock data. The remainder of this paper is organised as follows. Section 2 briefly outlines the production function approach, Section 3 discusses the empirical methodology of the paper, the results are presented in 4 and 5 summarises.

This paper analyses the impact of public capital on private sector productivity in Belgium over the period 1953–1996. Three important problems have been addressed. First, given the stochastic non-stationary behaviour of the variables traditionally included in the analysis, the estimates are based on cointegration techniques. Second, technology is not simply taken to follow some deterministic trend. Instead, an alternative proxy is constructed by applying a perpetual inventory method to the total number of patents granted by the US Patent and Trademark Office. Third, the direction of causality is tested for by using an error–correction model. In contrast to standard Granger causality tests, this approach allows for causality resulting from the estimated long-run equilibrium. The estimates reveal a significant positive relationship between public capital and private sector productivity. The estimated output elasticity of capital lies at approximately 0.29. In our ‘best’ specification, the results clearly point to a cointegrating relationship. The results are shown to be fairly insensitive to corrections for a possible endogeneity bias and to small changes in the assumptions underlying the construction of public capital stock data. Moreover, the results from estimating an error–correction model show that causality runs from public capital to multifactor productivity.