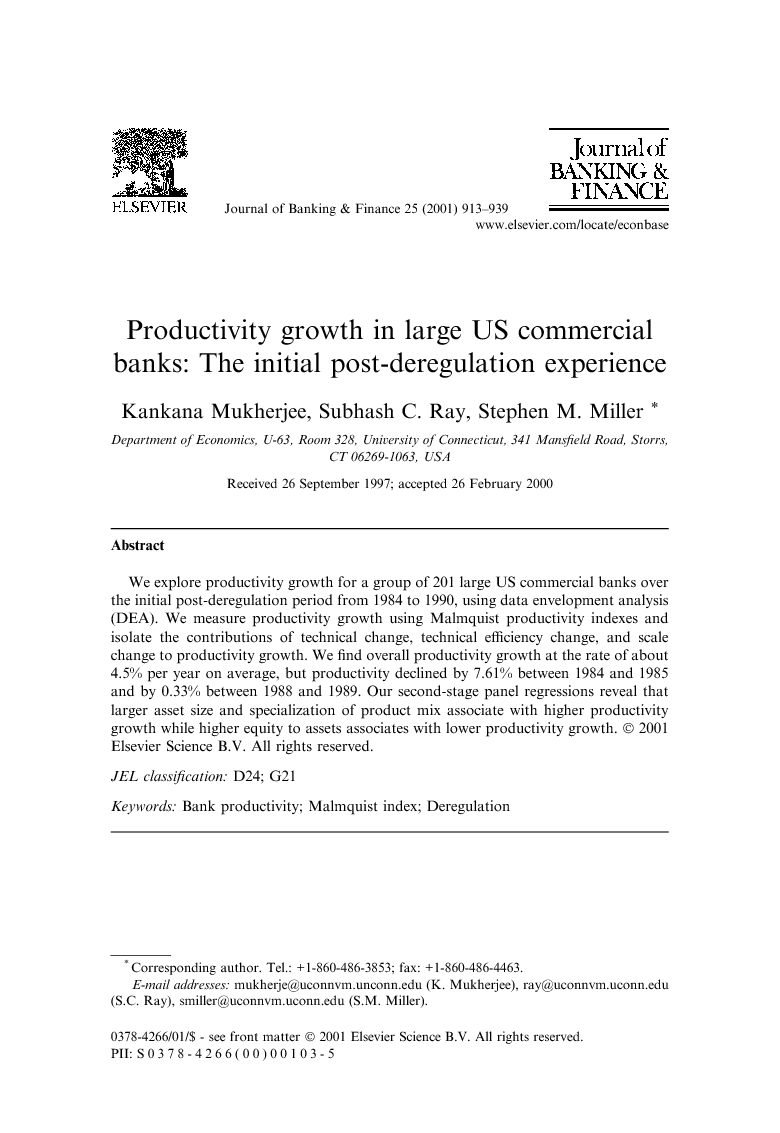 The US banking industry has experienced wrenching change over the last 20 years. The financial regulations adopted in the midst of the Great Depression created a tension between federal regulations, and their implementation and enforcement. While regulation generally restricted product-line and geographic expansion of commercial banking activities, financial innovation pushed back the regulatory line. That is, pressures from bankers for less regulation and more freedom of action generally produced implementation and enforcement of existing regulations that were less constraining. In addition, financial innovations sometimes facilitated detours around existing regulations. Many prohibitions on product-line and geographic expansion of commercial banking activities are, or have been, crumbling. This environment was also accompanied in the late 1980s and early 1990s by the largest number of commercial bank failures since the Great Depression. These failures along with mergers (some voluntary, others arranged by the Federal Deposit Insurance Corporation) have significantly reduced the number of commercial banks. Within this fluid environment, commercial banks faced enhanced competition both from other commercial banks and from other financial institutions, such as savings banks, savings and loan associations, credit unions, money market funds, and so on. After an initial adjustment period, increased competition should enhance commercial bank productivity. To date, however, most empirical analyses of commercial bank total factor productivity during the 1980s suggest little, no, or even negative productivity growth (e.g., Humphrey, 1991, Humphrey, 1993, Hunter and Timme, 1991, Bauer et al., 1993 and Wheelock and Wilson, 1999). We explore productivity growth for a group of large US commercial banks over the initial post-deregulation period from 1984 to 1990. We measure productivity growth using the Malmquist productivity index, employing a recent decomposition under variable returns to scale (VRS) suggested by Ray and Desli (1997). This decomposition isolates the contributions of technical change, efficiency change, and scale change to productivity growth. Measuring productivity change can employ either parametric or non-parametric methods. We adopt a non-parametric method, data envelopment analysis (DEA), to measure and decompose the Malmquist productivity index. We also identify those individual banks who actually shifted the frontier. Moreover, we complement the non-parametric analysis with two-way random-effects, panel-data regressions (Fuller and Battese, 1974) to explain the differences in productivity change of banks in terms of a number of variables, including asset size, diversification, exposure to risk, capital adequacy, and regional location. We find, contrary to the existing parametric literature, that large commercial banks experienced productivity increases at about 4.5% per year on average over 1984–1990, though not all banks experienced productivity gains. The maximum productivity gain of 12.61% occurred between 1989 and 1990, followed by an 11.98% gain between 1987 and 1988. In addition, productivity declined between 1984 and 1985 by 7.61%, and again between 1988 and 1989 by 0.33%. Our second-stage panel regressions reveal that commercial banks with more assets, more specialization in outputs, or lower equity to assets experienced higher productivity growth. The deregulation that began with the Depository Institution Deregulation and Monetary Control Act of 1980 followed shortly thereafter by the Depository Institution (Garn-St. Germain) Act of 1982 preceded the productivity findings reported in the previous paragraph. Further, the advances and regresses in total productivity at large banks were dominated by technical change between 1986 and 1990. Changes in efficiency, reflecting the significant downsizing in employment between 1984 and 1985, probably played an important role in explaining changes in total productivity between 1984 and 1986. In a recent article, Grabowski et al. (1994) consider the effect of deregulation on bank efficiency in the US using DEA with a sample of small-, medium-, and large-sized banks. They measure overall efficiency and its various decompositions for three years – 1979, 1983, and 1987 – to capture pre- and post-deregulation effects. While they note that their results are preliminary and that more work is needed, they conclude that “...the results of the study do not appear to support the hypothesis that deregulation had a favorable effect on the economic efficiency of banking firms” (p. 53). Our study differs from Grabowski et al. (1994) in several ways. We focus on large banks, where assets exceed $1 billion; they had few such banks in their sample. We examine dynamic productivity growth; they examine static efficiency. Our findings disagree with those of Grabowski et al. (1994), at least for the large banks in our sample. We find evidence of significant productivity growth between 1984 and 1990. Finally, and most recently, Wheelock and Wilson (1999) examine productivity growth in the mid- and late-1980s and early 1990s, using the Malmquist productivity index. Their work comes closest in spirit to our analysis. Several important differences exist, however. First and foremost, they find negative productivity growth for large commercial banks; we find positive productivity growth. Second, while our specification of outputs and inputs differs from theirs in certain respects, a key difference is our inclusion, and their exclusion, of equity as an input. Berger and Mester (1997) recommend the inclusion of equity in bank efficiency studies. Third, they consider banks of all sizes; we focus on large banks with assets in excess of $1 billion. In addition, our sample of banks remains invariant over time; their sample changes over time. Finally, we provide second-stage regressions of the possible determinants of the Malmquist productivity index; they do not. Our paper unfolds as follows. Section 2 presents a review of the relevant literature. Section 3 outlines the methodology leading to our decomposition. Section 4 discusses the data and empirical findings, and Section 5 concludes.

In this paper, we apply the non-parametric method of DEA to measure productivity changes for large US commercial banks over the initial post-deregulation period from 1984 to 1990 and to isolate the contributions of technical change, technical efficiency change, and scale change. We find overall productivity growth at the rate of about 4.5% per year, on average. Not all banks share equally in productivity growth, however. Moreover, productivity declined by 7.61% between 1984 and 1985 and by 0.33% between 1988 and 1989. This finding of positive productivity growth for large banks in the mid- and late-1980s runs counter to nearly all of the existing literature, including the most recent Wheelock and Wilson (1999) paper, who also use the Malmquist productivity index.24 A second-stage panel regression using the DEA findings reveals that banks with larger asset size experience higher productivity growth. Also, specialization of the product mix stimulates productivity growth. The benefits from specialization, however, get attenuated as the asset size of a bank increases, possibly because product specific diseconomies of scale sets in. Finally, higher equity to assets associates with lower productivity growth. The deregulation of US commercial banking went through a sea change with the passage of the Depository Institution Deregulation and Monetary Control Act of 1980 followed shortly thereafter by the Depository Institution (Garn-St. Germain) Act of 1982. By the first year in our sample, 1984, deregulation was well-underway. This year of 1984 was uncharacteristic of the years that followed in our sample, providing some departures from the norm. In 1984, technical efficiency averaged its lowest level and possessed, by far, the largest range across banks. While the growth of total productivity between 1984 and 1985 was the lowest annual growth (−7.61%) in our sample, it masked significant adjustments in the underlying components – technical change (−13.02%), efficiency change (5.14%), and scale change (1.88%). These findings reflect in large measure the dramatic downsizing in employment between 1984 and 1985 in our sample. Following these dramatic changes, the growth in total productivity reflected largely adjustments in the technical change index with some residual significant improvement in the efficiency change index between 1985 and 1986.