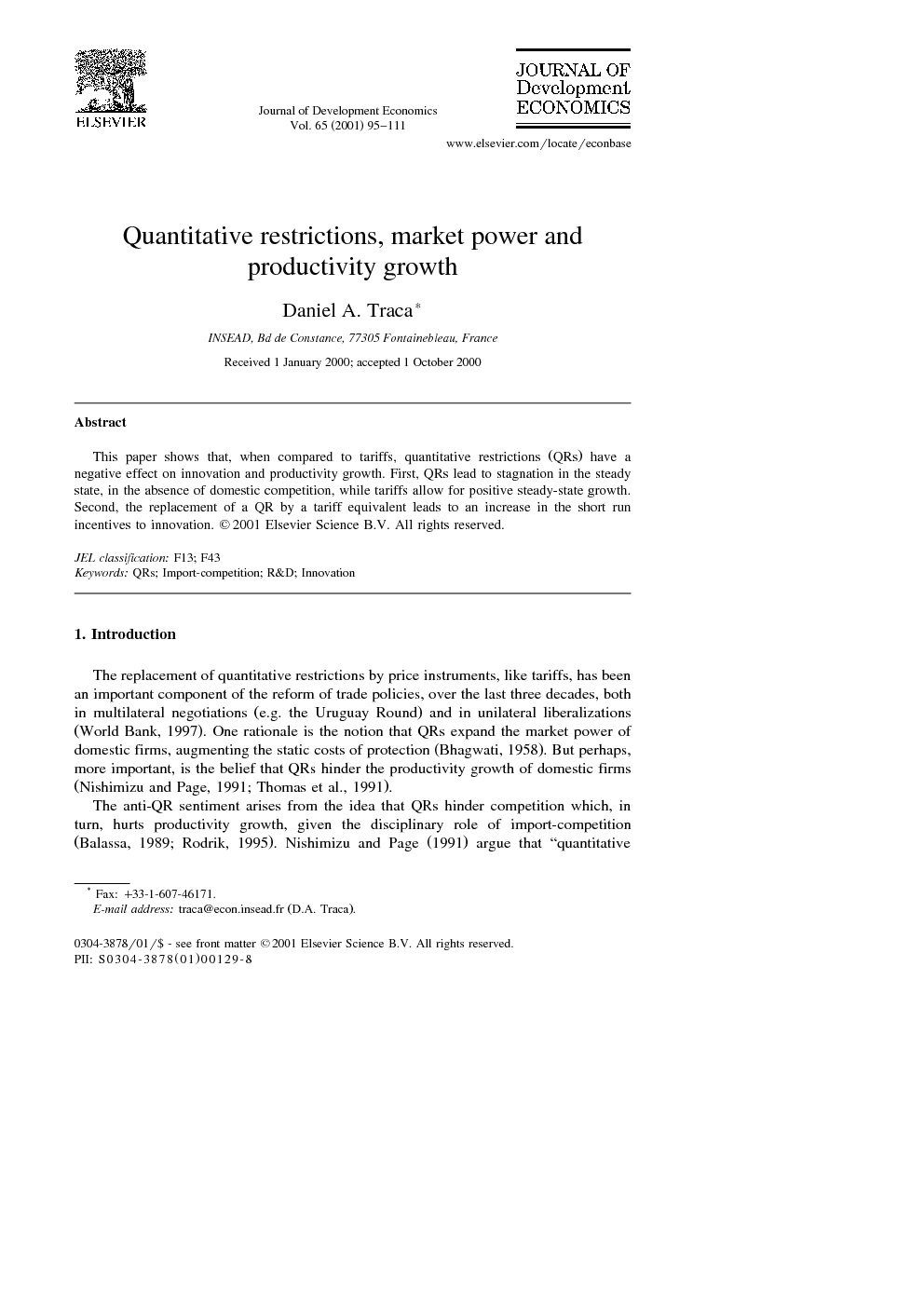 This paper shows that, when compared to tariffs, quantitative restrictions (QRs) have a negative effect on innovation and productivity growth. First, QRs lead to stagnation in the steady state, in the absence of domestic competition, while tariffs allow for positive steady-state growth. Second, the replacement of a QR by a tariff equivalent leads to an increase in the short run incentives to innovation.

The replacement of quantitative restrictions by price instruments, like tariffs, has been an important component of the reform of trade policies, over the last three decades, both in multilateral negotiations (e.g. the Uruguay Round) and in unilateral liberalizations (World Bank, 1997). One rationale is the notion that QRs expand the market power of domestic firms, augmenting the static costs of protection (Bhagwati, 1958). But perhaps, more important, is the belief that QRs hinder the productivity growth of domestic firms Nishimizu and Page, 1991 and Thomas et al., 1991. The anti-QR sentiment arises from the idea that QRs hinder competition which, in turn, hurts productivity growth, given the disciplinary role of import-competition Balassa, 1989 and Rodrik, 1995. Nishimizu and Page (1991) argue that “quantitative restrictions break the link between domestic and international prices. (…); [and that] instruments that interfere with the transmission of [international] prices can make the productivity performance of competitors irrelevant and lead to deteriorations of comparative advantage over time.” This paper presents a formal discussion of the role of QRs on productivity growth. It demonstrates that the expansion in domestic market power and the insulation from world price movements, arising from the use of QRs instead of tariffs, hinders innovation and cost cutting.1 Hence, it argues that tariffication, i.e. the replacement of a QR by a tariff that keeps unchanged the rate of protection, increases productivity growth in the short and long term. A number of studies present evidence of the perverse effects of QRs on productivity and innovation, by finding a negative and significant empirical relationship between the coverage ratio of QRs and measures of productivity performance, in cross-country and cross-industry samples Edwards, 1998, Nishimizu and Page, 1986 and Nishimizu and Page, 1991. Notably, after controlling for the level of protection, Kim (2000) and Lee (1996) still find that the use of QRs had a significant negative effect on productivity growth in Korea. In addition, based on evidence from country-studies of trade liberalization episodes, World Bank (1997) argues that economic growth speed up after a shift from quotas to tariffs. To address how trade policy influences innovation, this paper looks into the effects of market power on R&D, in small open economies, in an endogenous growth context. Our chief result is that, absent domestic competition, foreign competitive pressure is key to sustaining long-run endogenous growth. For trade policy, this implies that the economic costs of QRs (over tariffs) are also related to long-run growth, and thus are much higher than the traditional increase in domestic mark-ups (see Helpman and Krugman, 1989) and the ensuing level effect on productivity. In particular, QRs hinder innovation in two ways. First and foremost, QRs lead to stagnation in the steady state, while under tariffs, the domestic firm's long run innovation rate is positive. This result is driven by the monopolization effect, through which an increase in productivity increases a firm's mark up. We argue that it hinders the incentives for R&D and leads to stagnation, even in the presence of technological increasing returns to R&D. Steady-state endogenous growth requires a conflicting pro-competitive effect from (foreign) competitors that lowers domestic mark-ups. QRs lead to stagnation because they block out the pro-competitive pressure of foreign competitors. The second effect of QRs on productivity growth is related to their role in expanding domestic mark-ups Bhagwati, 1958 and Helpman and Krugman, 1989. By lowering mark-ups and increasing output, tariffs further innovation, through the cost spreading of R&D (Cohen and Klepper, 1996). Moreover, the ensuing increase in productivity leads to an expansion in the mark-up, due to the monopolization effect. In the long run, the mark-up under a tariff equivalent rises above its QR equilibrium, thus reversing the short run effects of tariffication considered by Bhagwati (1958). We follow Smulders and Van der Klundert, 1995 and Smulders and Van der Klundert, 1997 and Peretto (1996) in stressing the role of endogenous mark-ups on innovation, in an endogenous growth framework. Like them, we address R&D as a source of endogenous growth, in product market oligopolies, inspired by the IO literature (see Beath et al., 1995).2 In contrast, the traditional literature on R&D-based endogenous growth and international trade (e.g. Grossman and Helpman, 1991 and Rivera-Batiz and Romer, 1991) has focused on competition in the innovation sector, usually simplifying product market equilibria, such that mark-ups are constant (e.g. monopolistic competition, leap-frogging monopolies). Section 2 sets up the model. Section 3 establishes the non-equivalence of QRs and tariffs in the long-run rate of productivity growth. Section 4 addresses the short run effect of tariffication on productivity growth. Section 5 concludes. The appendix shows some of the proofs.

We have shown that tariffs and QRs have very distinct effects on productivity growth. First and foremost, allowing for endogenous growth, QRs lead to stagnation in the long run, while tariffs allow for positive steady-state rates of growth. Second, the replacement of a QR by a tariff equivalent expands productivity growth in the short run, because it reduces the firm's market power and expands output. Therefore, by stressing the implications of endogenous growth for trade policy, this paper has shown that the benefits of tariffication are related to an economy's long run growth rate and are much larger than the static gains from the decline in domestic mark-ups (Helpman and Krugman, 1989). It has shown also that an important share of the dynamic benefits from trade liberalization arise from tariffication, while changes in protection rates per se have only short term effects. Finally, by setting an R&D model of endogenous growth in oligopolistic product markets, where the implications of productivity differences for mark-ups are accounted for, this paper has found that competitive pressure is necessary to sustain the long run incentives for productivity growth. A (domestic) firm that does not face the pressure from its (foreign) competitors' growth stagnates in the long run, despite the increasing returns to its R&D. The reason is the monopolization effect of productivity growth on the mark-up and the market share, which chips away at the business stealing incentive to R&D. It is the pro-competitive effect of foreign productivity growth that keeps domestic mark-ups and market share in check, and replenishes the business stealing incentive. QRs lead to stagnation because they block foreign pro-competitive pressure. The interaction of the monopolization and the pro-competitive effects scrutinized here suggests that accounting for the effects of productivity gaps on mark-ups has implications for the role of product market oligopolies on endogenous growth that deserves further attention.15