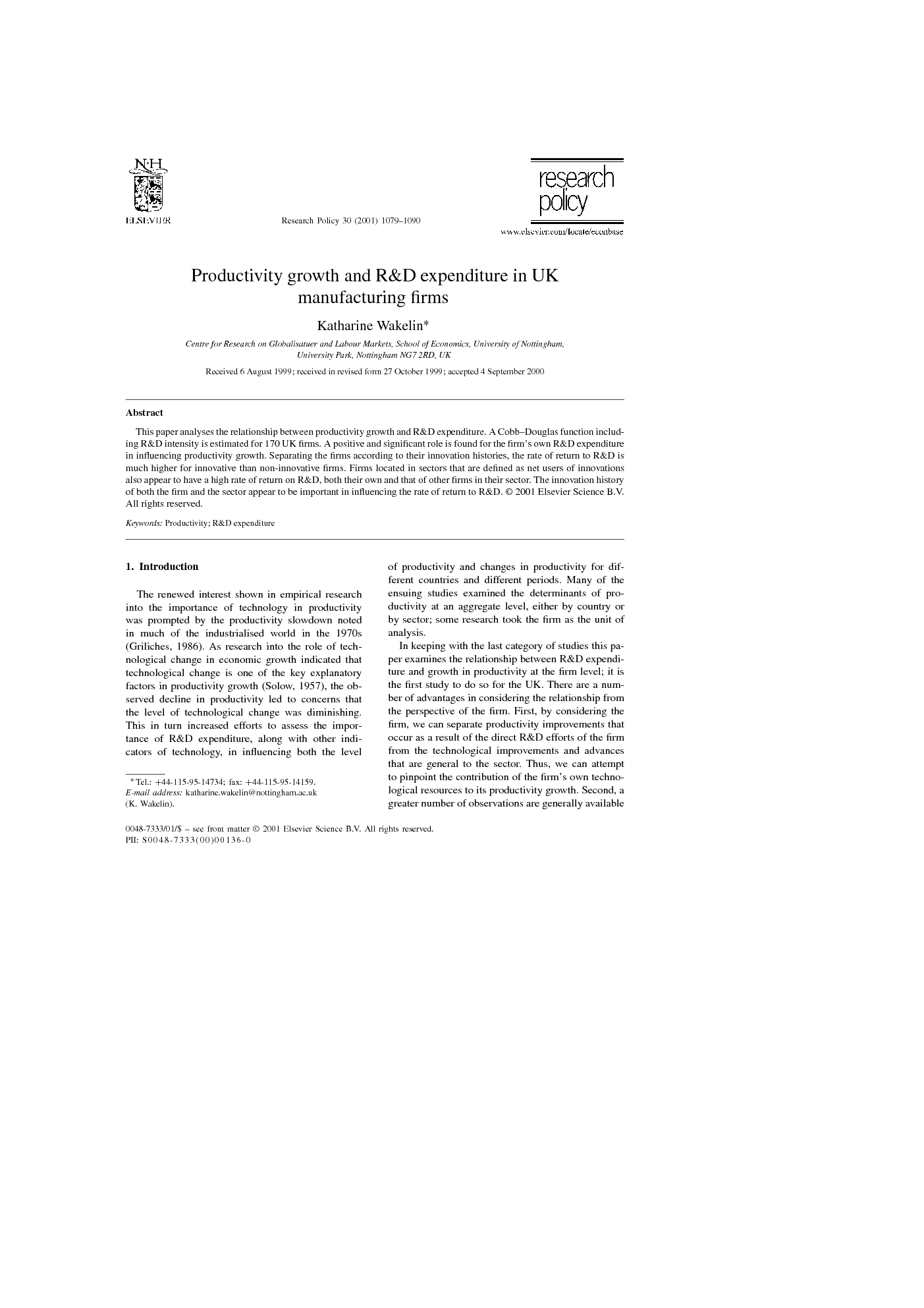 This paper analyses the relationship between productivity growth and R&D expenditure. A Cobb–Douglas function including R&D intensity is estimated for 170 UK firms. A positive and significant role is found for the firm’s own R&D expenditure in influencing productivity growth. Separating the firms according to their innovation histories, the rate of return to R&D is much higher for innovative than non-innovative firms. Firms located in sectors that are defined as net users of innovations also appear to have a high rate of return on R&D, both their own and that of other firms in their sector. The innovation history of both the firm and the sector appear to be important in influencing the rate of return to R&D.

The renewed interest shown in empirical research into the importance of technology in productivity was prompted by the productivity slowdown noted in much of the industrialised world in the 1970s (Griliches, 1986). As research into the role of technological change in economic growth indicated that technological change is one of the key explanatory factors in productivity growth (Solow, 1957), the observed decline in productivity led to concerns that the level of technological change was diminishing. This in turn increased efforts to assess the importance of R&D expenditure, along with other indicators of technology, in influencing both the level of productivity and changes in productivity for different countries and different periods. Many of the ensuing studies examined the determinants of productivity at an aggregate level, either by country or by sector; some research took the firm as the unit of analysis. In keeping with the last category of studies this paper examines the relationship between R&D expenditure and growth in productivity at the firm level; it is the first study to do so for the UK. There are a number of advantages in considering the relationship from the perspective of the firm. First, by considering the firm, we can separate productivity improvements that occur as a result of the direct R&D efforts of the firm from the technological improvements and advances that are general to the sector. Thus, we can attempt to pinpoint the contribution of the firm’s own technological resources to its productivity growth. Second, a greater number of observations are generally available for firms than for sectors. One drawback of the firm approach is the generally poor quality of the R&D data at the firm level. While the evidence from firm-level studies for other countries confirms a positive role for R&D expenditure in explaining productivity growth, R&D expenditure has been of only limited explanatory power in explaining differences in productivity rates among firms, sectors and countries (Griliches and Mairesse, 1990). Technology is treated in two different ways in the paper. First, the current commitment of resources to R&D expenditure is taken as one indicator of a firm’s technological level. Second, the paper also aims to investigate if the relationship between productivity growth and R&D intensity varies according to the innovation history of the firm. In order to do this the firms are separated into two groups: innovators and non-innovators, based on their past production of innovations. This classification aims to capture some aspects of technology which are not adequately reflected by R&D expenditure. The innovation history of a firm may proxy accumulated technological advantages, such as the attitude of the labour force and management towards innovation, and the general ability of the firm to implement change. There is some evidence (Blundell et al., 1995 and Malerba et al., 1997) that the ability to innovate is persistent and firm specific, making innovative firms qualitatively different from non-innovating firms. To investigate if this is the case our estimates of productivity growth are made separately for innovating and non-innovating firms. As a comprehensive survey of the impact of R&D on productivity at the firm level already exists (Mairesse and Sassenou, 1991), we will concentrate on the practical problems raised in estimating productivity functions at the firm level and alternative ways of dealing with them. Section 2 sets out the relationship to be estimated. Section 3 provides information on the sample and outlines the data used. Section 4 examines the results, which are presented for all firms and for innovating and non-innovating firms separately. Section 5 looks for any variations in the relationship which may occur due to the sector in which the firm is located, including the role of spillovers of innovation from other firms in the economy on firm productivity. The last section gives some conclusions.