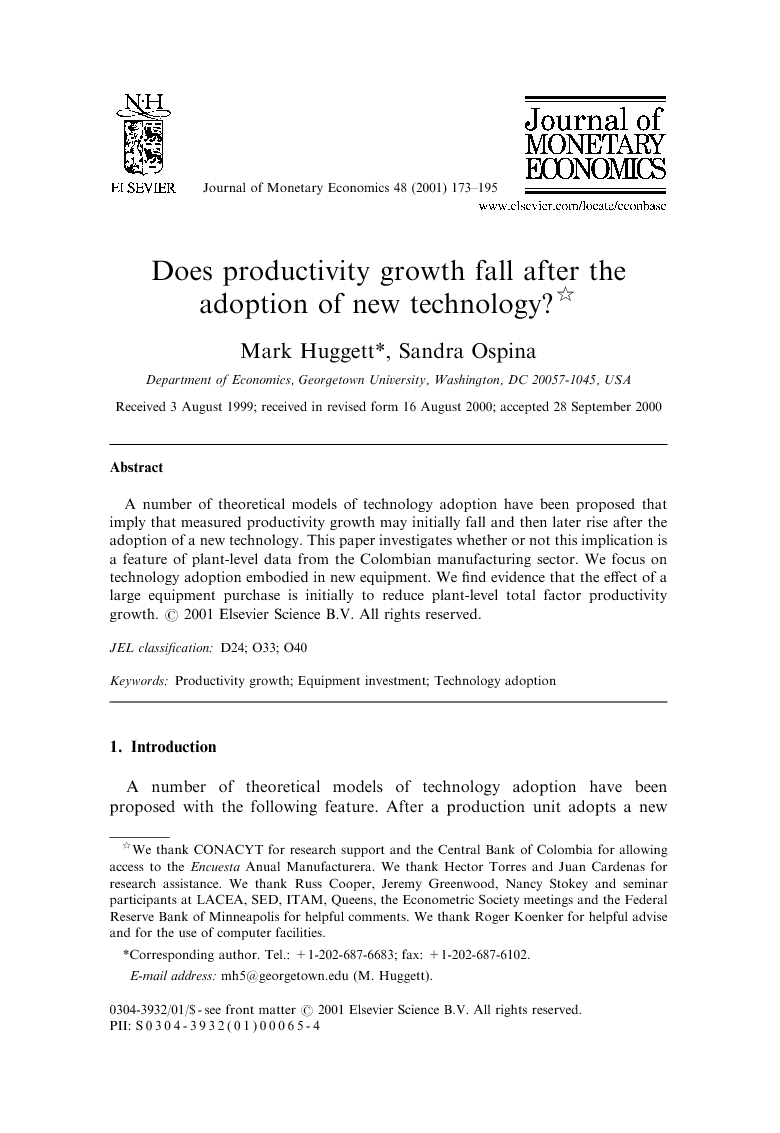 A number of theoretical models of technology adoption have been proposed that imply that measured productivity growth may initially fall and then later rise after the adoption of a new technology. This paper investigates whether or not this implication is a feature of plant-level data from the Colombian manufacturing sector. We focus on technology adoption embodied in new equipment. We find evidence that the effect of a large equipment purchase is initially to reduce plant-level total factor productivity growth.

The main findings of the paper are as follows: (1) Our best estimate is that the contemporaneous effect of a large equipment investment is to decrease a plant's total factor productivity growth by 3–9 percent in annual data. This decrease is larger for larger critical values for what constitutes a large equipment investment. (2) This finding holds within industries and is robust to plausible amounts of unmeasured quality improvements in equipment. (3) The bulk of investment in either equipment or all reproducible physical capital occurs at existing plants rather than at new plants. We attach the following significance to these findings. First, the findings are inconsistent with models where all plants within an industry are affected by a common disembodied technology shock and/or by technological improvements embodied in new equipment. Second, if large equipment investments coincide with the adoption of new technology embodied in new equipment, then the findings imply that the adoption of new technology contemporaneously reduces total factor productivity growth. Third, we believe that the finding that the bulk of equipment investment occurs at existing plants has implications for future work. This finding suggests that the literature which attempts to quantify the implications of microeconomic models of equipment investment for aggregate productivity growth issues should concentrate on models where equipment investment occurs not only at new plants but also at existing plants. We mention two directions to explore in future work. First, what is the effect on productivity growth of equipment purchases that reflect technology adoption versus those that merely reflect the acquisition of more capital of a technology known to the plant? This is a key question. To address this question a data set that allows such a distinction to be measured is needed. Doms et al. (1997) describe a data set that is potentially promising in this regard. Second, it would be useful to see if the findings presented here are confirmed in data sets for other countries and time periods.