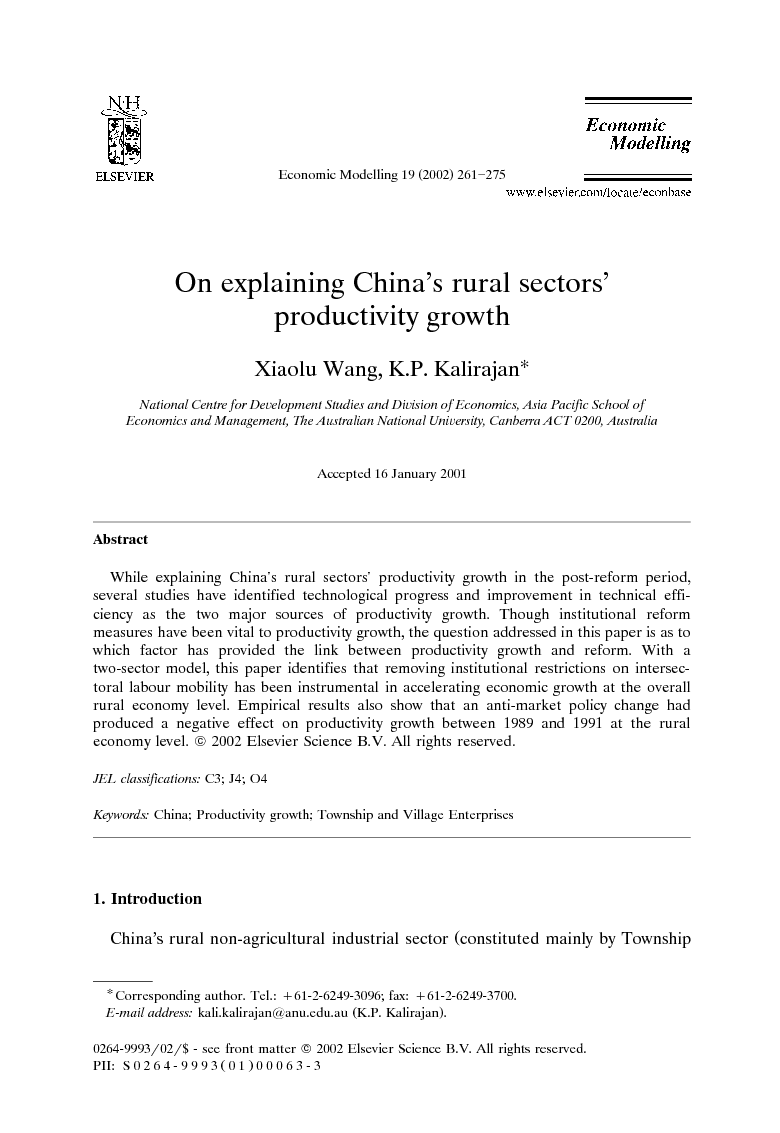 China's rural non-agricultural industrial sector (constituted mainly by Township and Village Enterprises or TVEs)1 has been developed over several decades. With the establishment of the People's Commune System in 1958, all rural industrial enterprises were owned collectively by either People's Communes and Production Brigades or Production teams2 (called Commune-and-Brigade-Enterprises). These enterprises were developed under the central government policy of local self-reliance, as complements to agricultural production. In their initial stage of development, rural industrial enterprises were faced with several operational restrictions. Firstly, they were strictly owned collectively and under the control of the communes’ administration. Private enterprises were prohibited. Secondly, production was basically restricted to: (a) repairing and manufacturing agricultural machinery and tools; (b) processing some agricultural products; (c) mining and processing local resources; and (d) other locally needed production. Thirdly, distribution of bank funds and many basic materials that required by the local enterprises were under the control of either the central or local governments. Also, there were restrictions on migration, not only between rural and urban areas, but also between regions within rural areas. These institutional restrictions ensured that the government got cheap agricultural products to support its ‘heavy industry priority’ development strategy during the central planning period (see Dong, 1988 and Lin et al., 1994). In addition, under the central planning control and the ‘heavy industry priority’ strategy, both social and physical infrastructure in rural areas were seriously underdeveloped for a long period. Road system, transportation and communication facilities were usually poorly developed. There was no employment information service for rural labour and hardly any travel services. Education and job training facilities were seriously in short supply. All these increased the cost of labour mobility among sectors and regions. All these restrictions distorted the factor market, resulted in differences in labour marginal productivity between rural sectors and, therefore, caused inefficient use of resources. Given all these restrictions, rural industry experienced a limited development under the commune system. Until 1978, Commune and Team Enterprises employed 28 million workers, which accounted for only 9% of total rural labour [BTV(b) 1990, 1991, 1992, pp. 4]. It is well known that since 1978, China experienced rapid economic growth. In this period, development of the non-state sector played a most important role in economic growth. Rural non-agricultural industrial sector (Township and Village Enterprise Sector or TVE) has been the major component of the non-state sector in China. According to China's Ministry of Agriculture, the average annual output growth of the TVE sector during 1979–1994 was 29% [BTV(a) 1991, 139; 1992, 133; 1995, 89], much higher than the 12% of overall output growth rate at the national level.3 During this period, TVE Employment increased by 325% from 28 million to 120 million, absorbing 27% of total rural labour (SSB 1995, 330, 364). Value of TVEs’ gross output in constant price increased by more than 20 times. This period witnessed an accelerated process of rural industrialisation. In 1994, TVEs contributed above 40% of the national industrial output. There is little doubt that this dramatic development of the rural industry mainly resulted from institutional transformation, reducing restrictions on factor allocation among rural sectors.4 A number of studies have examined China's rural industrial productivity during the period of economic reform. Jefferson (1989) and Jefferson et al. (1992) found that the collective industrial sector (of which rural industry was the major component) had lower total factor productivity (TFP) than the state-owned industrial sector, but the former's TFP growth rate was significantly faster than the latter. Their results were reconfirmed by another study by Wu (1993) using TVE data. Svejnar (1990) estimated a production function using survey data and concluded that TVEs ‘have achieved a significant rate of technical progress over time’. Wang (1990) found that TVEs generally had a higher profit margin to their total capital than state enterprises. Furthermore, he indicated that TVEs run by township governments showed lower profit margin than other TVEs. While explaining China's rural industrial growth, these and other studies have paid relatively more attention to technical progress and increasing efficiency at the firm level than to the discussion of the mechanisms by which such productivity growth was achieved. An important question in this context is which factor provided the link between productivity growth and economic reform in China's rural sector. This link has not been discussed sufficiently in the literature. The objective of this paper is to identify the core factors responsible for the productivity growth in China's rural sectors during the period of economic reform, with special reference to labour policies. In Section 2, a two-sector model is established to identify the factors that contributed to improvement in productivity growth in the rural economy during the period of economic reform. Effects of short-term policy changes in that period, particularly in 1989–1991, are also examined using additional time trends. With a brief description of data sources, the empirical results are discussed in Section 3. Finally, Section 4 outlines the conclusion.

This paper is concerned with estimating both TFP growth at the sectoral level, and the impact of institutional changes on the contribution of productivity changes in China's rural sectors at the aggregated level. A major question addressed in this paper is as to which factor has provided the link between productivity growth and reform in China's rural sectors. With a two-sector model, this paper identifies that removing institutional restrictions on intersectoral labour mobility has been instrumental in accelerating economic growth at the overall rural economy level. The major empirical findings, which support the theoretical expectations, are as follows: • There was significant total factor productivity growth in both the rural industrial sector and the agricultural sector during the reform period of 1980–1988. The TFP growth rate was faster in the rural industrial sector than in the agricultural sector. However, TFP growth was either stagnant or slow in the two sectors in 1989–1991, when an anti-market policy was introduced. • In addition to TFP growth at the sectoral level, an acceleration of overall rural economic growth during 1980–1988 was identified. This resulted from the increasing labour productivity at the aggregated level, caused by the institutional changes that induced reallocation of labour from the low-productivity agricultural sector to the high-productivity rural industrial sector. • Due to anti-market policy changes, institutional factors were found to have produced a negative effect on productivity growth and economic growth in 1989–1992, at the aggregated level. This effect in 1992 could be a time lag, since the central policy was redirected to market-orientation in 1992.