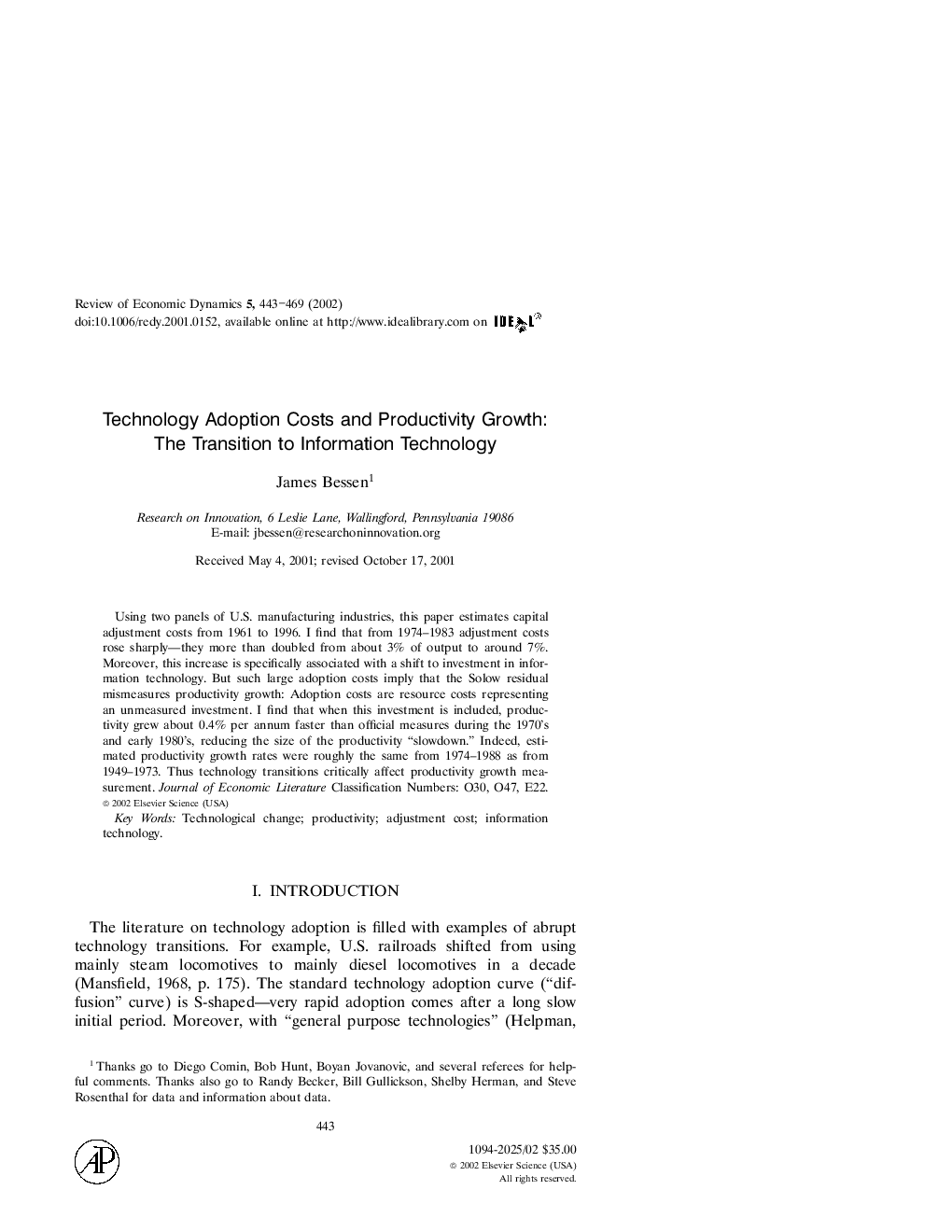 Using two panels of U.S. manufacturing industries, this paper estimates capital adjustment costs from 1961 to 1996. I find that from 1974–1983 adjustment costs rose sharply—they more than doubled from about 3% of output to around 7%. Moreover, this increase is specifically associated with a shift to investment in information technology. But such large adoption costs imply that the Solow residual mismeasures productivity growth: Adoption costs are resource costs representing an unmeasured investment. I find that when this investment is included, productivity grew about 0.4% per annum faster than official measures during the 1970's and early 1980's, reducing the size of the productivity “slowdown.” Indeed, estimated productivity growth rates were roughly the same from 1974–1988 as from 1949–1973. Thus technology transitions critically affect productivity growth measurement. Journal of Economic Literature Classification Numbers: O30, O47, E22.

The literature on technology adoption is filled with examples of abrupt technology transitions. For example,U.S. railroads shifted from using mainly steam locomotives to mainly diesel locomotives in a decade (Mansfield,1968,p. 175). The standard technology adoption curve (“diffusion”curve) is S-shaped—very rapid adoption comes after a long slow initial period. Moreover,with “general purpose technologies” (Helpman,1998),many different industries may adopt new technologies all at once.For example,many industries adopted electricity-based technologies during the 1920’s and 1930’s and many adopted electronics-based technologies during the 1970’s and 1980’s. Such Schumpeterian technology transitions pose a problem for productivity measurement because such new technologies are usually new goods; that is,they are not perfect substitutes for earlier technologies. Specifically, whole new technologies may incur large adoption costs because they involve learning new skills,implementing new forms of organization,and developing complementary investments. Indeed,reviewing the recent literature on the impact of computers,Brynjolfsson and Hitt (2000) find that complementary organizational investments may be much larger than the investment in computer equipment itself. Also,information technology,in particular, often involves customization and custom software,some of which remains unmeasured in official statistics. Because such complementary investments appear in official productivity statistics only as resource costs without the corresponding contribution to investment (and hence output),productivity may be mismeasured.This paper estimates these adoption costs in the U.S. manufacturing sector from 1961–1996,and it calculates revised productivity growth estimates based on these. Using two panels of industry data (one using 4-digit SIC industries,the other 2-digit),I obtain two main empirical results. First, I find that capital adjustment costs rose sharply during the period from 1974–1983,at the same time as investment sharply shifted toward information technology (IT). Second,I find that this rise in costs is specifically associated with this change in technology. In other words,these are costs of adopting new technology.Applying adjustment cost estimates from each panel to BLS productivity measures for the manufacturing sector,I obtain estimates of productivity growth from 1974–1983 of 0.91% and 0.94%,compared to an official estimate of 0.52%. For 1974–1988 the estimates are 1.42% and 1.53%,compared to 1.13%. These growth rates compare favorably to the official growth measures from 1949–1973 of 1.52%,suggesting that any productivity slowdown was brief at most.

Moses Abramowitz (1956) called the Solow residual “some sort of measure of ignorance.” It is,perhaps,comforting to assume that our ignorance grows only gradually and that the rate of technological change remains more or less constant. But evidence from history and evidence on the “diffusion” of innovations suggest that technologies frequently exhibit dramatic,Schumpeterian transitions.This paper finds evidence of just such a transition during the 1970’s: The cost of installing and implementing new capital more than doubled. And I find evidence linking this increase to a greater share of investment in IT.Such a dramatic change suggests that firms experienced large adoption costs when switching to new technologies. This concurs with case study evidence. But a rapid increase in adoption costs implies that the Solow residual does not accurately measure productivity growth. Calculations based on estimated adoption costs demonstrate that productivity growth may have substantially exceeded the Solow residual during the 1970’s,shrinking the measure of the productivity slowdown. In other words,much of the apparent productivity slowdown may be an artifact of measurement error. Our ignorance may,in fact,increase sharply during periods of technological transition.This is important because,from a longer historical perspective,technology transitions may not be infrequent. The shift to an increasing share of investment going to information technology is,in fact,part of a longer secular trend: the share of investment going to equipment has increased overall (with occasional interruptions) since the 19th century. Some of this increase can be readily identified with new technologies,e.g.,the growth in spending on electrical devices and electric transmission equipment during the middle of the past century.From this perspective,the 1960’s—when measured productivity was high,but also when the equipment share of investment did not increase—may have been a temporary respite from the technology transitions implied by this trend. Rather than a “normal” period,this era may have benefited from improvements to existing technologies without the costs of adopting many new technologies.The rise in adoption costs during a technology transition affects more than productivity growth. Other researchers have argued that adoption costs may also relate to changes in wage inequality,wage skill premia,the relative employment of skilled workers,and stock prices (Hornstein and Krusell,1996; Greenwood and Yorukoglu,1997; and Greenwood and Jovanovic,1998). The results here emphasize the importance of these connections.