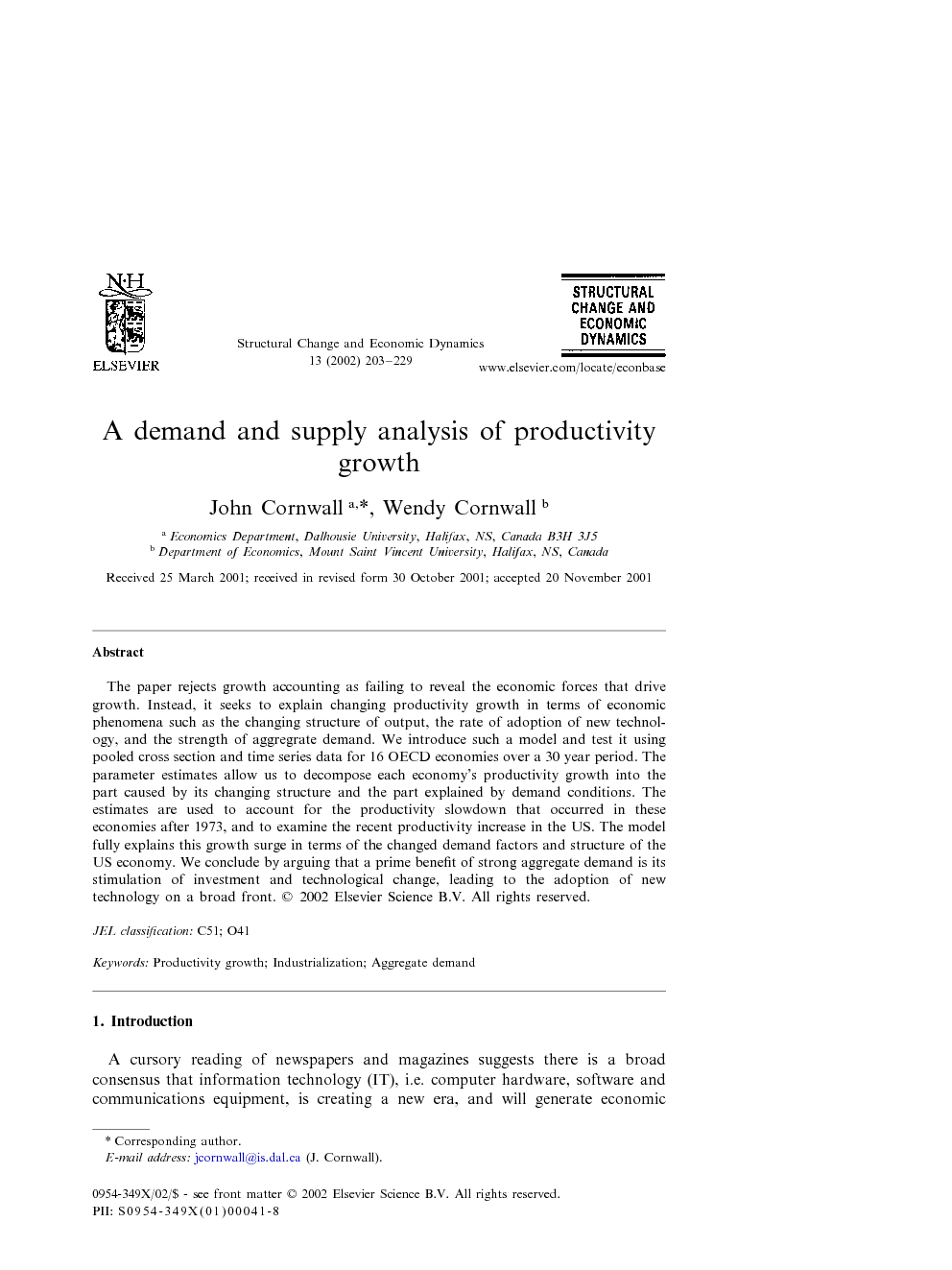 The paper rejects growth accounting as failing to reveal the economic forces that drive growth. Instead, it seeks to explain changing productivity growth in terms of economic phenomena such as the changing structure of output, the rate of adoption of new technology, and the strength of aggregrate demand. We introduce such a model and test it using pooled cross section and time series data for 16 OECD economies over a 30 year period. The parameter estimates allow us to decompose each economy's productivity growth into the part caused by its changing structure and the part explained by demand conditions. The estimates are used to account for the productivity slowdown that occurred in these economies after 1973, and to examine the recent productivity increase in the US. The model fully explains this growth surge in terms of the changed demand factors and structure of the US economy. We conclude by arguing that a prime benefit of strong aggregate demand is its stimulation of investment and technological change, leading to the adoption of new technology on a broad front.

A cursory reading of newspapers and magazines suggests there is a broad consensus that information technology (IT), i.e. computer hardware, software and communications equipment, is creating a new era, and will generate economic change on a scale comparable to the advent of the steam engine or electricity. This is particularly the case in the US, where a recent acceleration of productivity growth awaits explanation. These two trends—rising productivity growth and rising application of IT—have inspired a surge in neoclassical growth accounting. The approach has been to disaggregate capital formation in computing and related technologies from the more traditional types of investment, in order to see whether the growth acceleration is disproportionately attributable to computer related capital formation (Jorgenson and Stiroh, 2000). Evidence that investment in the IT producing sector and the spreading use of IT throughout the economy, especially in the service sector, is a key contributor to the productivity growth increase in the second half of the 1990s, is then used to support the contention that this is a permanent or (more vaguely) ‘ongoing’ boost to productivity growth. Neoclassical growth accounting is generally embedded in a production function framework. It explains growth in terms of proximate supply side factors such as the growth of capital and labour. One shortcoming of this approach is its neglect of structural changes as economies modernize. A second is that it ignores the effect of overall economic performance i.e. the state of aggregate demand, on growth rates. To address these problems, we introduce and test a model that explains economy-wide productivity growth as the outcome of both demand and supply. We stress the role played by changes in the distribution of output and inputs among three sectors, agriculture, manufacturing (or industry) and services. This level of disaggregation is sufficient to show how demand determines the sectors’ shares of output and, given sectoral productivity levels and growth rates, governs the allocation of labour and determines the growth rate of average productivity. We test the model using pooled cross-section and time-series data for 16 OECD economies over a 30 year period up to the 1990s.1 The parameter estimates allow us to account for the part of an economy's productivity growth due to demand factors and that due to its changing structure. The estimated coefficients are used to account for the productivity slowdown in these economies after 1973. This exercise reveals the relative importance of economic structure and demand as determinants of productivity growth. The same coefficient estimates are also used to examine the recent acceleration of productivity growth in the US. The results show the growth surge to be fully accounted for by changes in demand factors and in the structure of the US economy. We conclude by arguing that the benefits of strong aggregate demand include the stimulation of investment and technological change, and in rapid application of the change on a broad front. Moreover, continued demand pressure creates continued stimulus for investment and technological change, and is therefore a dynamic source of continuous productivity growth. These benefits are not confined to any particular sector, but accrue in response to changes in demand for final goods and services wherever they occur in the economy. While the type and pace of technological change cannot be predicted, we are confident in predicting that strong demand will increase the rates of innovation and of diffusion of available technologies, and in doing so will increase productivity growth. The paper is organized as follows. Section 2 discusses the sources of rapid productivity growth in the golden age, emphasising the effects of the various components of aggregate demand and structural change on average productivity growth rates. Examination of the long expansion of the golden age provides historical perspective for assessing recent US experience. In Section 3, we move from the golden age to a longer-run perspective in order to introduce a model relating productivity growth to the transformation of output and employment structures observed as economies develop. This model permits the contribution of demand factors to growth to be disaggregated from the productivity effects of longer-run changes in output structure. This section uses a diagrammatic presentation; the formal model is relegated to Appendix A. In Section 4, an equation based on this model is estimated to assess the sources of growth for a sample of 16 OECD economies. The results of the estimation are reported in Section 5. Section 6 utilizes the estimates to account for the productivity slowdown after 1973, and to examine the recent rise in US productivity growth. Section 7 provides a short summary and critique of the contrasting neoclassical framework of growth accounting. The conclusions are in Section 8.

The estimates of productivity growth reported here show the contribution of various components of aggregate demand, including the positive role of low unemployment. The estimated equation was based on a model of growth and transformation, and was estimated using the longest period for which consistent data are available. This allowed us to isolate the effect of ‘backwardness’, which exerts its own influence on productivity growth, and more accurately assess the impacts of export and investment growth and catching up. The results show that our model can explain most of the variation in productivity growth among the economies in our sample. We have used it to analyze the productivity slowdown after 1973, and the recent growth surge in the United States. It provides very accurate estimates for US productivity growth changes, both within the estimation period and for the ‘out-of-sample’ years. Lack of data prevents its re-estimation to examine IT investment growth specifically, or to examine possible interactions between different categories of investment. This is an irremediable problem for the long run models needed to provide historical perspective. But neglect of interactive effects is also problem in recent ‘growth accounting’ investigations of relatively short-run changes in productivity growth. Nevertheless, the available US data are clearly consistent with the contention that the increase in service sector productivity growth of the late 1990s is attributable to the very rapid growth of IT investment. Of at least equal interest is the fact that productivity growth in the service sector was faster than in manufacturing, since this raises the question of whether this is a permanent feature of ‘late’ capitalism. However, we note that falling unemployment has contributed significantly to a business climate that encourages investment and rapid technical change. Based on our analysis of investment in new technologies that allowed rapid catching up to occur in the golden age, we make the analogy that the increase in service sector productivity growth may persist for a number of years, but cannot be permanent. Once IT is fully exploited, further productivity growth acceleration depends upon technological advances that are unpredictable. What can be predicted is that buoyant aggregate demand would ensure the full and rapid expansion of IT.