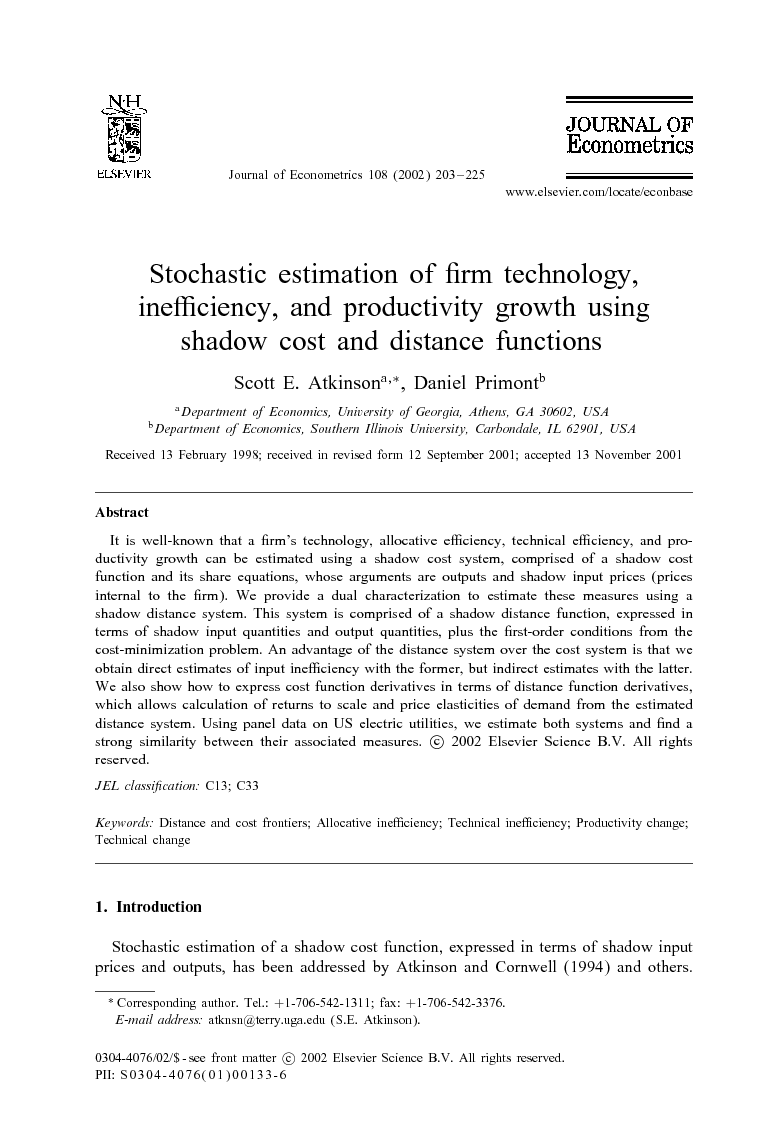 It is well-known that a firm's technology, allocative efficiency, technical efficiency, and productivity growth can be estimated using a shadow cost system, comprised of a shadow cost function and its share equations, whose arguments are outputs and shadow input prices (prices internal to the firm). We provide a dual characterization to estimate these measures using a shadow distance system. This system is comprised of a shadow distance function, expressed in terms of shadow input quantities and output quantities, plus the first-order conditions from the cost-minimization problem. An advantage of the distance system over the cost system is that we obtain direct estimates of input inefficiency with the former, but indirect estimates with the latter. We also show how to express cost function derivatives in terms of distance function derivatives, which allows calculation of returns to scale and price elasticities of demand from the estimated distance system. Using panel data on US electric utilities, we estimate both systems and find a strong similarity between their associated measures.

Stochastic estimation of a shadow cost function, expressed in terms of shadow input prices and outputs, has been addressed by Atkinson and Cornwell (1994) and others. Shadow prices (internal to the firm) may differ from market (actual) prices. Using a shadow cost system, where actual costs and shares are expressed in terms of shadow costs, one can fully characterize the firm's behavior by estimating the allocative efficiency (AE) and technical efficiency (TE) of the firm, productivity change (PC), returns to scale, and price elasticities of demand for inputs. One can further decompose PC into efficiency change (EC), which measures improvement relative to the frontier firm, and technical change (TC), which measures the shift in the frontier itself. A number of papers have also estimated the dual input or output distance function. Among them are Grosskopf et al. (1997), Coelli and Perelman (1999), and Reinhard and Thijssen (1997). However, these studies do not establish the set of dual relationships between input distance and cost functions that would allow full characterization of the firm's behavior. Therefore, in this paper, we derive these fundamental dual relationships between a shadow cost function and a shadow distance function. Using these dualities, we can fully characterize the firm's behavior using a cost system or a shadow distance system. The shadow distance system is comprised of a shadow distance function, expressed in terms of shadow input quantities and output quantities, plus the first-order conditions from the cost-minimization problem. One advantage of the shadow distance system is that it allows direct estimation of the impact of allocative inefficiency on relative input utilization. This is typically of greater interest than the direct estimation of relative shadow prices using a shadow cost system. After appending error terms to the equations in our cost and distance systems, we utilize panel data on US electric utilities to estimate each system. Since at least one of the variables in these regression models must be endogenous, we use the Generalized Method of Moments (GMM) to test the validity of our overidentifying restrictions. We find a strong degree of similarity between the AE, TE, EC, TC, PC, returns to scale, and price elasticities of demand computed from each system. The remainder of this paper is organized as follows. In Section 2, we derive the shadow cost and distance systems. In Section 3, we obtain the necessary equations to obtain scale economies and elasticities of substitution from the distance system. For both systems, in Section 4 we examine issues in the econometric estimation of AE, TE, and PC. An application to a panel of US utilities is presented in Section 5, and conclusions follow in Section 6.

We have formulated shadow distance and shadow cost systems as dual approaches to estimating firm technology, allocative efficiency, technical efficiency, and productivity growth. The shadow input quantities from a shadow distance system and shadow input prices from a shadow cost system provide dual measures of allocative inefficiency. While estimation of relative input misallocation is performed directly using the shadow distance system, it is performed indirectly using the shadow cost system. Using duality theory, we show how to recover cost function derivatives in terms of distance function derivatives, which allows estimation of returns to scale and price elasticities of demand using only the estimated distance function parameters. For both systems, technical inefficiency is decomposed from noise, using a fixed effects frontier specification. Using panel data for 43 US utilities over 37 years, we estimate both shadow cost and shadow distance systems. We find general agreement between the two models with regard to the over-use of capital relative to labor and to energy and the under-use of energy relative to labor. The technical inefficiency estimated by both models is consistent with an industry characterized by local monopoly power subject to rate of return regulation. For both models, efficiency change is small but negative, while technical change and productivity change are small but positive. Finally, both models find the existence of moderately increasing returns to scale and substitutability among inputs.