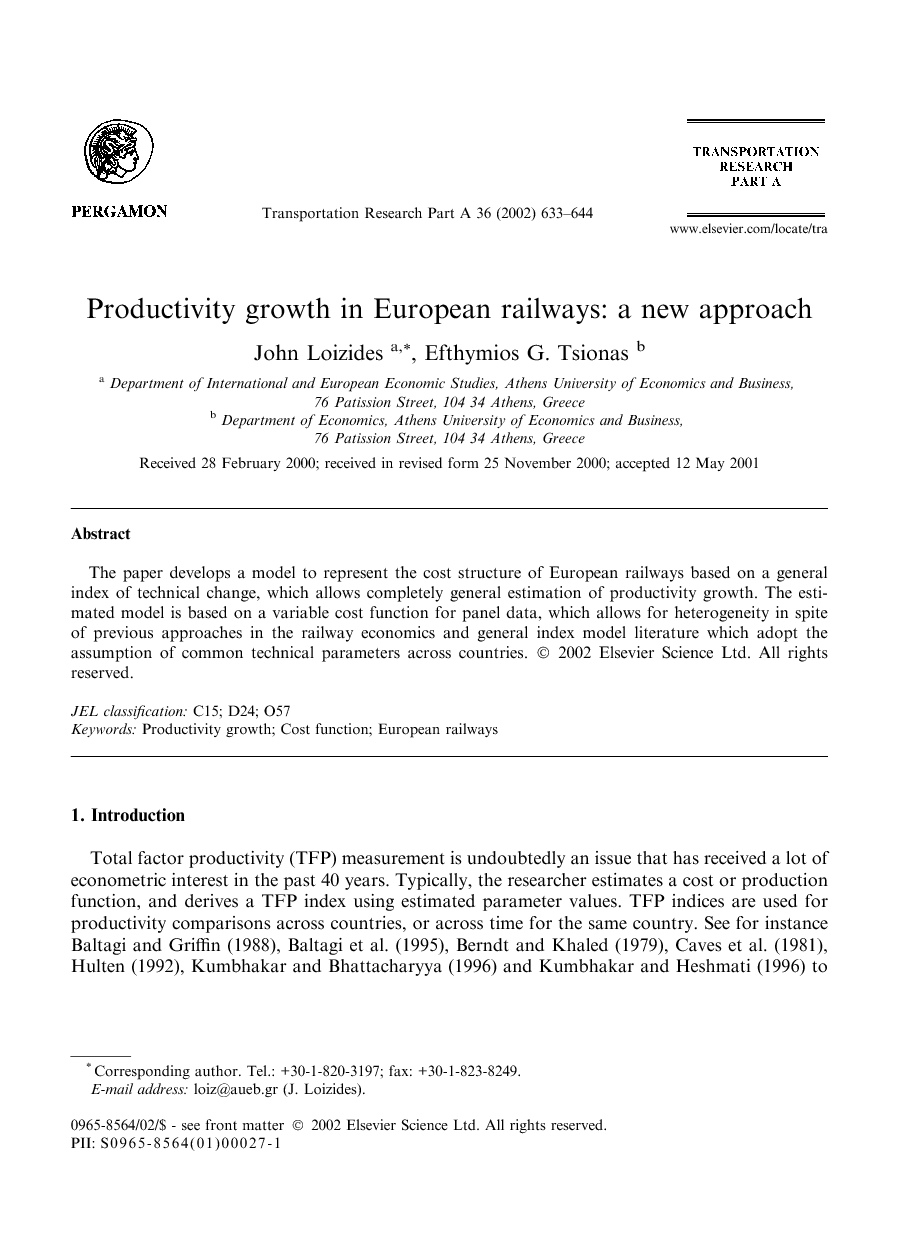 The paper develops a model to represent the cost structure of European railways based on a general index of technical change, which allows completely general estimation of productivity growth. The estimated model is based on a variable cost function for panel data, which allows for heterogeneity in spite of previous approaches in the railway economics and general index model literature which adopt the assumption of common technical parameters across countries.

Total factor productivity (TFP) measurement is undoubtedly an issue that has received a lot of econometric interest in the past 40 years. Typically, the researcher estimates a cost or production function, and derives a TFP index using estimated parameter values. TFP indices are used for productivity comparisons across countries, or across time for the same country. See for instance Baltagi and Griffin (1988), Baltagi et al. (1995), Berndt and Khaled (1979), Caves et al. (1981), Hulten (1992), Kumbhakar and Bhattacharyya (1996) and Kumbhakar and Heshmati (1996) to name but a few. For a general survey of recent developments in cost function estimation in the transportation sector see Oum and Waters (1996). Models based on general indices of technical change and most models applied to European railways assume that the panel is homogeneous and introducing fixed effects can capture any difference. However, European railways are different in terms of technical capabilities, efficiency levels, management practices, and access to high-quality factors of production to an extent that makes the assumption of common technical coefficients at least suspect. However, the existing literature does not seem to account for this fact. For previous studies in the area see Cantos et al. (1999), Cowie and Riddington (1996), Oum and Yu (1994), Gathon and Pestieau (1991), Gathon and Perelman (1992), and the seminal study by Perelman and Pestieau (1988). In this paper, short-run cost functions are specified which allow technological coefficients to be different across countries without imposing further restrictions. The model includes a general index of technical change following Baltagi and Griffin (1988) and Baltagi et al. (1995), and is capable of generating estimates of country-specific technical change indices which are free from problems related to assuming homogeneity of the panel. The model can be estimated using the seemingly unrelated regressions (SUR) technique. These general technical change indices are better than widely used multilateral TFP measures. As pointed out by Baltagi et al. (1995, p. 654) “[u]nfortunately, measures of technical change that measure both inter-firm and inter-temporal differences have proven to be particularly elusive. Whether one adopts the conventional Divisia total factor productivity approach or uses a time trend to measure technical change (…) these approaches offer at best a proxy for inter-temporal changes (…)”. The general index allows for inter-firm as well as inter-temporal differences in performance. Moreover, the general index is superior to multilateral TFP measures because these tend to include the effect of scale economies, regulatory service constraints, etc., thus confounding technical change with output attributes. The general index can be used to measure technical change in a general way, and thus provide policy makers in the railway sector with important information. The measurement of inter-railway cost differences and their evolution over time are important in understanding the effects of market structure, regulatory constraints, and technological innovation. Therefore, it is important to have precise measures of technical change. The multilateral TFP index is not a very appealing measure because it is heavily influenced by output characteristics of the firm, and thus it cannot measure precisely the effects of market structure or technological innovation (see Baltagi et al., 1995). However, in view of the significant changes that currently take place in European railways (in terms of changing market structure, and introducing technological advances) it is important to account for these factors, and ensure that they are properly accounted for in measured technical change. The main contribution of the paper is that it shows how to explore the distribution of productivity growth. Usually, applied researchers focus on point estimates of productivity growth ignoring the sampling variation. Taking into account the sampling variation can make a great deal of difference in productivity growth rankings. Focusing on the asymptotic distributions of estimated parameters can facilitate exploring the distribution of productivity growth. Then the distribution of productivity growth for each year can be computed on a routine basis. The remainder of the paper is organized as follows. The method is explained in Section 2. Data and empirical findings are discussed in Section 3. The final section concludes the paper.

The study has adopted a system-wide approach to pooling cross-section and time series data on European railways, in order to derive the dynamic distributions of productivity growth in 10 railroads of the European Union over the 1970–1992 period. Since the panel is heterogeneous, i.e. technical coefficients cannot be assumed equal across railroads, pooling was completed using an SUR approach, where technical coefficients are fixed and different across different railroads. This is a significant improvement over existing panel data analyses in the transportation sector that assume common coefficients across all units. To measure productivity growth, the general index approach developed by Baltagi and Griffin (1988) and Baltagi et al. (1995) was adopted. Since interest focuses on how the distributions of the general index and country-specific measures of technical change evolved over time, asymptotic theory confidence intervals were derived. Such intervals depend on estimated parameters and utilize the lognormal distribution. It has been found that the common component of technical change in European railways shows a clear, declining trend over time. Finally, only German and British railways seem to have positive technical change (equivalently, the TCI index is in excess of unity). Generally, their strong performance shows that most other European railways still have considerable room for productivity improvements and in a practical sense it is the exploitation of the scope for such improvements that provides the most valuable outcome of international comparisons. Throughout the 1990s the European railways were at the center of a complex process designed for setting up a market system for the supply of rail transport of goods and passengers. The separation between network management and transport service management was conceived as a first indispensable step to achieve the objectives of maximizing railway efficiency and minimizing subsidy.4 Elsewhere, the separation of infrastructure provision from train operations has usually been achieved either by creating separate divisions within a vertically integrated railway administration, or by creating a new, publicly owned body to be responsible for infrastructure management. In the latter case, the existing railway organization often continues operating and maintaining the rail network, but now performs these functions under the terms of a contract with the new infrastructure. It is far too soon to claim that recent reforms in European railways have succeeded or failed in terms of changing the fortunes of the railways in the transport market. Information available at the end of 1997 shows that the process of reorganization and regulation of national industries is slow and essentially formal company separations prevail (see Bognetti and Fazioli, 1999). The extreme case is in the UK, where the previously integrated BR has been split into approximately 100 firms and organizations, most of them privatized, and with competition introduced in (or for) almost all markets.