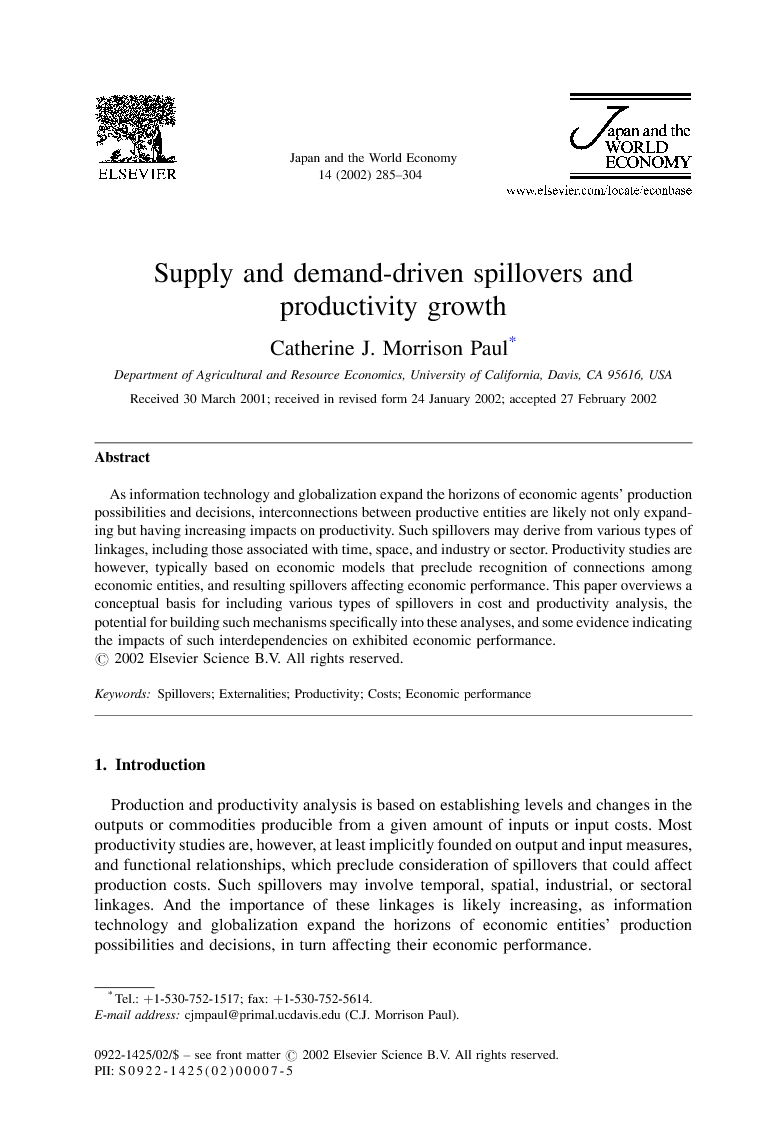 As information technology and globalization expand the horizons of economic agents’ production possibilities and decisions, interconnections between productive entities are likely not only expanding but having increasing impacts on productivity. Such spillovers may derive from various types of linkages, including those associated with time, space, and industry or sector. Productivity studies are however, typically based on economic models that preclude recognition of connections among economic entities, and resulting spillovers affecting economic performance. This paper overviews a conceptual basis for including various types of spillovers in cost and productivity analysis, the potential for building such mechanisms specifically into these analyses, and some evidence indicating the impacts of such interdependencies on exhibited economic performance.

Production and productivity analysis is based on establishing levels and changes in the outputs or commodities producible from a given amount of inputs or input costs. Most productivity studies are, however, at least implicitly founded on output and input measures, and functional relationships, which preclude consideration of spillovers that could affect production costs. Such spillovers may involve temporal, spatial, industrial, or sectoral linkages. And the importance of these linkages is likely increasing, as information technology and globalization expand the horizons of economic entities’ production possibilities and decisions, in turn affecting their economic performance. The force of spillover mechanisms is evident in a broad range of industries, from the traditional (the food sector), to the high-tech (computers and E-commerce). Both the anecdotal and academic literatures on productivity/performance drivers for these industries indicate that increasing interdependencies are emerging across production levels—from primary commodity production through distribution channels. These linkages exacerbate the effects of both production rigidities and embodied technological change, through spatial and industrial/sectoral transmission and diffusion. Such adaptations in the technological and economic environment have been experienced in all types of industries, and will ultimately need to be recognized explicitly in productivity analyses to unveil their impacts on industry, sector, and national economic performance and competitiveness, although they are usually ignored. For example, the literature on economic performance in the US food system highlights the rigidities inherent in agricultural production through its dependence on fixed land, labor, and capital inputs. Differences and linkages among states and regions have also been documented. And high levels of innovation, through R&D and associated changes in inputs (seeds, livestock, pesticides) and production processes in agricultural markets, have been highlighted. These supply-side factors have resulted in greater productivity growth than in virtually any other sector of the economy. Demand-side impacts on food markets and performance, from changes in the diversification, quality, and amount of processing desired by consumers, have also been recognized. Some studies have stressed the potential transmission of these impacts through supply- and demand-side forces at the sectoral level. That is, innovation at lower levels of the production chain disseminate up to higher levels, and changes in the composition and quality of demanded products affect lower levels of the chain. This wide swatch of interconnections clearly has had a great impact on costs, production, and competitiveness in US food markets. These linkages thus clearly need to be understood, or at least recognized and assessed, for appropriate measurement and interpretation of economic performance indicators for this sector. On the other side of the high-tech “coin”, the (largely non-academic) literature on the computer industry—and in particular E-commerce—has highlighted many types of externalities and spillovers that affect performance in this sector. For example, expansion of consumer/supplier linkages is a critical aspect of the performance contribution of E-commerce, as is well exhibited by analyses of B2B (business-to-business) and B2C (business to consumer) networks. E-commerce facilitates greater transactions speed as well as number of suppliers, and supplier linkages seem to be “impacted more quickly and obviously” than those for demand (Keen and Balance) by these mechanisms. In addition to these consumer/supplier agglomeration effects, various types of knowledge externalities, changes in transactions costs, inventory procedures, and outsourcing patterns, and an increased focus on information propagation and reputation/good will, have been attributed to the expansion of E-commerce. The role of spatially “thick markets” for computer-oriented firms has been highlighted, and exhibited by the explosion of specifically high-tech areas such as Silicon Valley. And production rigidities, affecting economic performance through the very large and “lumpy” capital and goodwill expenditures (combined with rapid obsolescence) required to thrive in these markets, have been alluded to. The potential of increased production flexibility to enhance performance, through the ability to rapidly adapt to exhibited demand or supply changes, has also been noted. Again, interactions and spillover mechanisms seem to have had strong and increasing impacts on economic performance patterns in this sector. These driving forces are important to identify and understand for appropriate measurement and use of economic performance measures. However, productivity analysts do not usually even try to measure such impacts, even though we often pay lip service to them. This study overviews the conceptual basis for including various types of spillovers in production and productivity analyses, and some evidence indicating the impacts of such interdependencies on exhibited economic performance. A framework facilitating the measurement of intersectoral supply- and demand-driven spillovers disseminated from primal production to final consumed products is then offered, as a foundation for an empirical foray into such issues.

As we began, I will end by stressing that there is clear evidence of consequential and increasing interconnections and spillovers through the production and distribution chains of most economic sectors. These patterns, likely associated with the explosion of information technology, and rapidly increasing mobility and globalization, imply that spillovers—across time, space, and industry or sector—have a significant effect on economic performance and its trends. Thus, economic performance analyses should at least recognize the potential of these impacts to enhance or diminish productivity growth, and ideally include them directly in models used for performance analysis, although most such models preclude consideration of linkages and spillover-effects. That is, fixities and rigidities in production processes resulting from required large purchases of equipment, extensive specific training programs, development of information networks, or other “lumpy” stock inputs, reflect temporal dependencies that may increasingly inhibit observed productivity growth. However, flexibility arising from technological developments that facilitate the application of inputs to a broader range of output production could have the reverse effect. Spatial spillovers across states, regions, and countries could cause productivity of firms within geographically thick markets to improve, but also might reduce the potential for productive entities outside such a spatial network to maintain competitiveness. Interactions and spillovers among industrial and sectoral layers and levels, associated with demand- and supply-side agglomeration effects also exhibit productive effects, at least in part due to the increasing influence of the internet on distribution sectors at various levels (B2B and B2C). And sectoral transmissions of supply and demand-side effects arise more specifically as a result of diffusion of innovations from lower levels of the system, and inducements due to demand-side adaptations from higher levels. Empirical information about the productive impacts of this broad range of potential interactions and spillovers is limited. But what there is supports the notion that these linkages provide key mechanisms for maintaining and enhancing productivity and growth, in both the short- and long-run. Supplier linkages may dominate those associated with the demand-side. Enhanced flexibility seems possibly to be facilitated by modern technological processes, although important stock effects restricting performance remain—at least partially associated with large capital and other stock (training, “good will”) investments required for “new era” production. And thick markets—spatially as well as in terms of diffusion of innovation, breadth of products, and extent of supply-side connections—seem to provide positive external cost-effects, even in our new economy. Much more attention to these issues will be necessary in future research, however, to identify, quantify, and understand how to enhance, such performance and growth patterns, as our global economy moves inexorably forward into increasingly complex interactive market and technological systems.