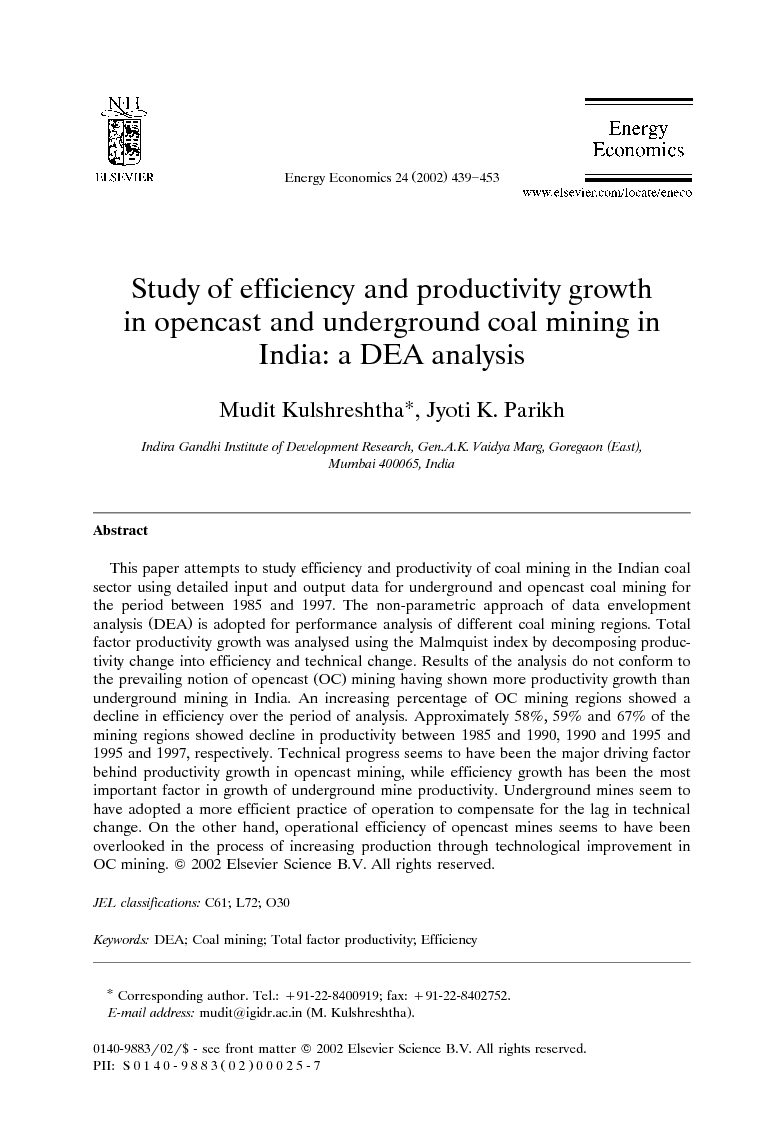 This paper attempts to study efficiency and productivity of coal mining in the Indian coal sector using detailed input and output data for underground and opencast coal mining for the period between 1985 and 1997. The non-parametric approach of data envelopment analysis (DEA) is adopted for performance analysis of different coal mining regions. Total factor productivity growth was analysed using the Malmquist index by decomposing productivity change into efficiency and technical change. Results of the analysis do not conform to the prevailing notion of opencast (OC) mining having shown more productivity growth than underground mining in India. An increasing percentage of OC mining regions showed a decline in efficiency over the period of analysis. Approximately 58%, 59% and 67% of the mining regions showed decline in productivity between 1985 and 1990, 1990 and 1995 and 1995 and 1997, respectively. Technical progress seems to have been the major driving factor behind productivity growth in opencast mining, while efficiency growth has been the most important factor in growth of underground mine productivity. Underground mines seem to have adopted a more efficient practice of operation to compensate for the lag in technical change. On the other hand, operational efficiency of opencast mines seems to have been overlooked in the process of increasing production through technological improvement in OC mining.

This study attempted to carry out an in-depth performance analysis of coal mining in approximately 30 regions of India. A non-parametric approach to frontier analysis was adopted and efficiency scores for the different mining regions were determined using DEA, separately for underground and opencast mining. A Malmquist productivity index approach was used to study productivity development in the different regions over the periods from 1985 to 1990, 1990 to 1995 and 1995 to 1997. Total factor productivity was decomposed into the effects of technical change and pure efficiency change. The results of the analysis indicated that contrary to the common belief of higher productivity growth in opencast mines, the OC mines have not displayed productivity development very significantly better then underground mines. There has been, however, remarkable technical change in opencast mines with approximately 18 out of 24 regions displaying improvement in technology by more than 20% between 1995 and 1997. The increasing share of output from opencast mines in the country has been more due to the conscious efforts at technological improvement of opencast mining, aimed at a fast recovery of output vis-à-vis the underground mines which require more intensive efforts. Productivity growth in opencast activity seems to have been driven primarily by technical change rather than growth in efficiency as is evident from the fact that only five out of 24 regions indicated growth in technical efficiency during the period 1995–1997. On the other hand, the underground mining seems to have improved in efficiency to compensate for the deteriorating technical change. In UG mines only 10 out of 22 mines showed positive technical change between 1990 and 1995, while 19 regions showed growth in operational efficiency. Thus, it is imperative that efforts at optimizing input use be made in the opencast mines to fully exploit the benefits of improving technology. The underground mines should not be overlooked and equal effort needs to be made at technology upgradation in underground mines. This is especially so because underground mines have large deposits of superior quality coal and quality gets compromised in opencast mining. Also, to improve operational efficiency of opencast mines, close monitoring of input purchase and use is required. CMPDIL, the subsidiary of CIL, which is mainly responsible for research and development work and introduction of new technologies, takes consultancy and collaborations from research organizations in India and abroad. However, the total annual budget of coal companies for upgradation have been in the range of Rs 80–150 million only. Considering the volume and infrastructure of coal companies, budget allocation for these activities is proportionately far too little and needs to be raised appropriately.