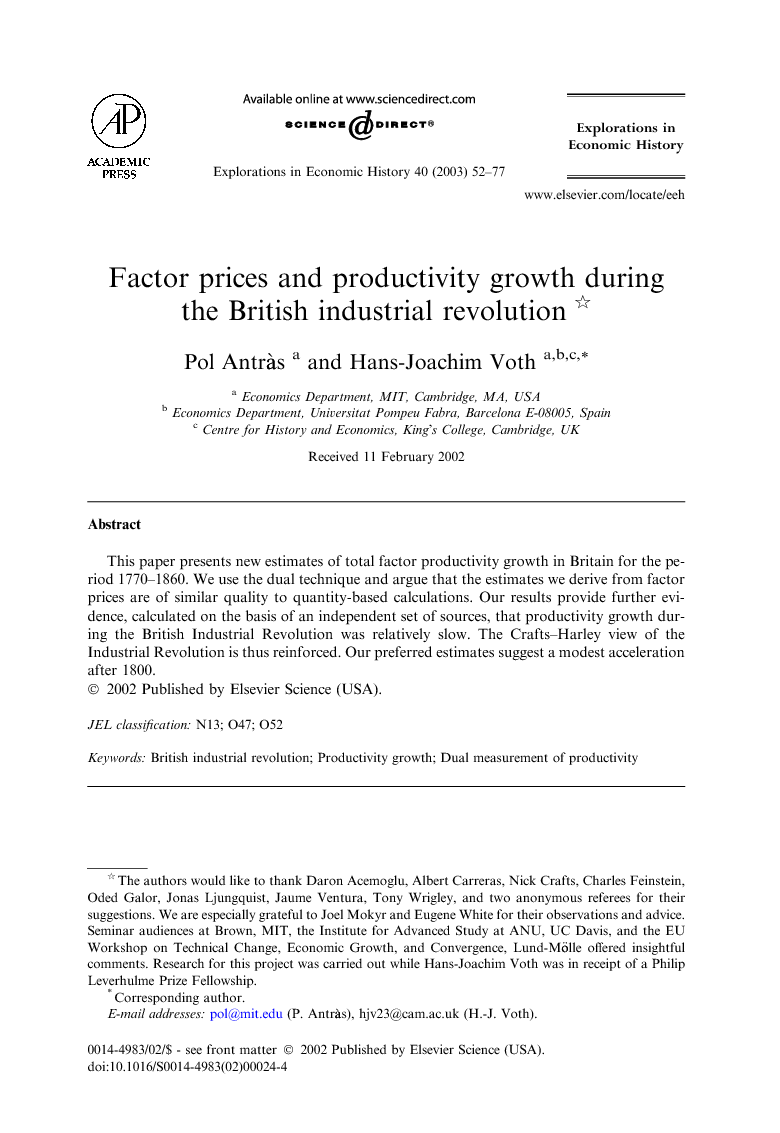 This paper presents new estimates of total factor productivity growth in Britain for the period 1770–1860. We use the dual technique and argue that the estimates we derive from factor prices are of similar quality to quantity-based calculations. Our results provide further evidence, calculated on the basis of an independent set of sources, that productivity growth during the British Industrial Revolution was relatively slow. The Crafts–Harley view of the Industrial Revolution is thus reinforced. Our preferred estimates suggest a modest acceleration after 1800.

Critics of productivity and growth estimates during the industrial revolution often imply that the Crafts–Harley view, and the quantity-based calculations on which it is based, is little more than a house of cards. In particular, some scholars have argued that output and productivity growth during the English industrial revolution must have been more rapid than the current orthodoxy has claimed.71 This paper shows that independent evidence, using an alternative method, yields results that are very similar to the Crafts–Harley view. We base our productivity calculations on factor prices, and thereby offer confirmation of the main findings by Crafts and Harley from a new and independent source. The quality of our estimates can only be as high as our sources allow. Yet, as Feinstein reminds us:72 “The case for quantification in the face of the multitude of gaps and uncertainties in the available data is not that it provides definitive estimates. It is, rather, that it helps to establish orders of magnitude, and to test how robust or vulnerable the estimates are to different assumptions and judgements the statistician is forced to make in the face of a lack of satisfactory evidence.” It is in this spirit that our results need to be interpreted. Productivity growth was very slow during the last decades of the eighteenth century, and may even have been zero. This is compatible with the Crafts–Harley view, and reinforces recent findings that further downward revisions of primal TFP calculations due to higher labour input may well be in order.73 There was no ‘take-off’ in the sense of Rostow. What acceleration there was occurred after 1800, and was mild. The efficiency with which the economy combined factors of production never increased at a rate markedly faster than 0.5% before 1830, and probably much less than that. How can the evidence in favour of slow productivity growth be squared with the data on foreign trade? Since Temin finds strong evidence that Britain became an exporter of all manufactured goods, he argues that productivity growth must have been relatively widespread. This would also suggest that aggregate growth rates have been underestimated. One of the central underlying assumptions in the Ricardian model of trade as used by Temin is that the relative price of factors of production does not change, and that wages are a good proxy for the overall cost of manufacturing. Our data on the remuneration of factors directly shed light on this question. We find that the rental price of capital fell while wages rose in the first period; in the second, rental growth outpaced wage increases. The data used in the calculation of our dual productivity estimates therefore also demonstrate why the foreign trade data in themself—interpreted in Ricardian framework—are not necessarily at variance with the Crafts–Harley view of the Industrial Revolution. Britain may have manufactured a wide range of goods because factors of production other than labour were relatively cheap. The dual approach also highlights the close connection between productivity growth on the one hand and the course of living standards on the other. Some scholars appear comfortable with a relatively pessimistic view of changes in living standards, while at the same time arguing that productivity growth has been understated (and is an insufficient measure of the speed of change).74 These are contradictory positions, as dual measurement of productivity growth makes clear. Unless the labour share in national income moved very sharply—for which there appears to be no reliable evidence—real wage growth in the long run has to follow the trend rate of TFP increases.75 Our dual estimates of productivity growth during the Industrial Revolution do not provide definitive estimates that could supersede the existing ones, based on primary TFP measures. Rather, they are useful because they add independent support using an altogether different method to the Crafts–Harley view. Even a house of cards can be remarkably stable if numerous independent elements support each other.