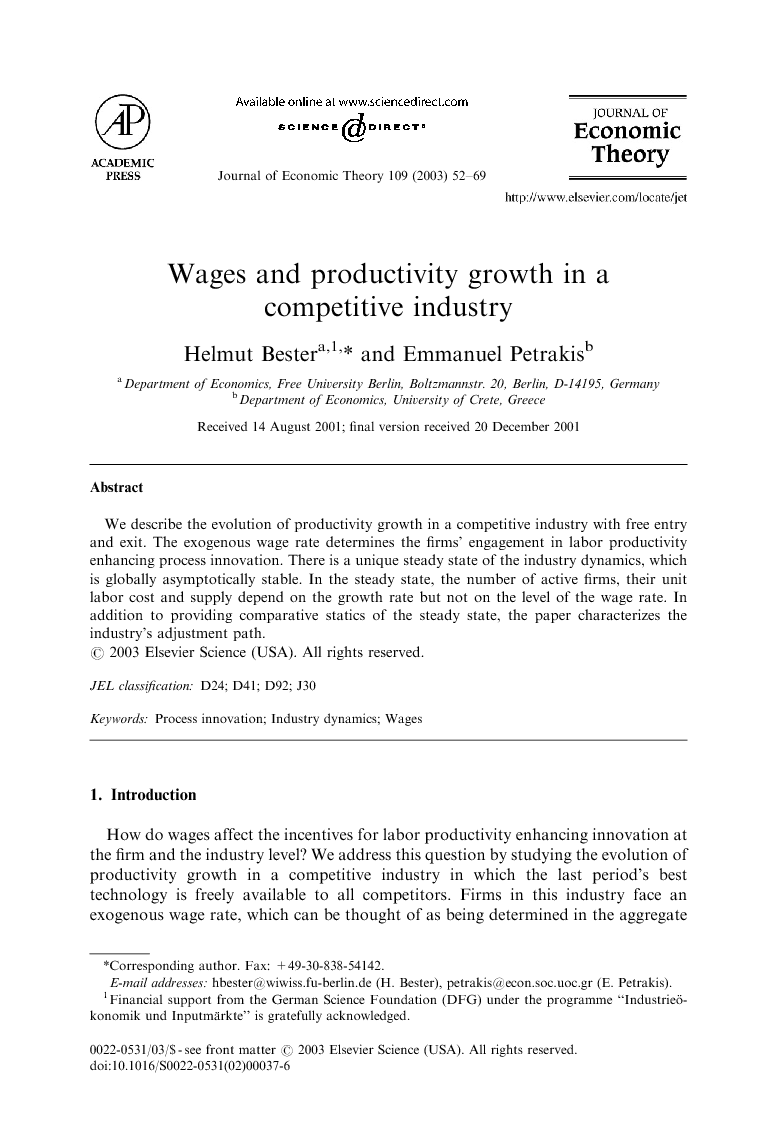 We describe the evolution of productivity growth in a competitive industry with free entry and exit. The exogenous wage rate determines the firms’ engagement in labor productivity enhancing process innovation. There is a unique steady state of the industry dynamics, which is globally asymptotically stable. In the steady state, the number of active firms, their unit labor cost and supply depend on the growth rate but not on the level of the wage rate. In addition to providing comparative statics of the steady state, the paper characterizes the industry's adjustment path.

Technical progress and a substantial increase in real wages are main attributes of the growth process in the advanced industrial nations. Our analysis presents a cost-push argument of productivity growth. The basic idea is that profit seeking, competitive firms adjust their innovative activity to increasing labor costs. Higher labor costs create stronger incentives for process innovations that raise the productivity of labor. The more interesting issue, however, is the dynamic interaction between innovation and productivity. As current innovations aim at reducing the firms’ labor cost, they also affect their future incentives for inventive activities. Our analysis shows that long-run productivity growth at the industry level is driven by the growth rate of wages. This rate determines the number of active firms, their labor costs per unit of output, the size of firms and the industry's output in the long-run. While these variables are independent of the level of the wage rate, the latter determines the level of labor productivity and employment within the industry. These results are derived in a basic model with a deterministic innovation process. Yet, it is shown that this model can easily be extended and that uncertainty does not qualitatively change the results. The industry's adjustment path exhibits either entry or exit of firms. In contrast with a number of recent studies on industry dynamics, we abstract from stochastic factors that induce firm heterogeneity. Yet, this abstraction is mainly motivated by simplicity. In principle, our model could be enriched by firm-specific technological shocks so that entry and exit occur simultaneously. Another interesting extension of our model is the consideration of imperfect competition. A Cournot or Bertrand framework could address the question of how strategic interactions between the firms affect productivity growth in the short-run and in the long-run. Stimulated by the work of Schumpeter [27], a large part of the literature on R&D relates the pace of innovative activity to market structure. An imperfect competition version of our model could combine this approach with our cost-push argument. Also, it would allow studying the impact of unionization on innovation. Rent sharing is likely to depress the short-run incentives for innovation. Yet, our results lead to the conjecture that unionization will not influence long-run productivity growth, unless wage bargaining affects not only the level but also the growth rate of industry wages.