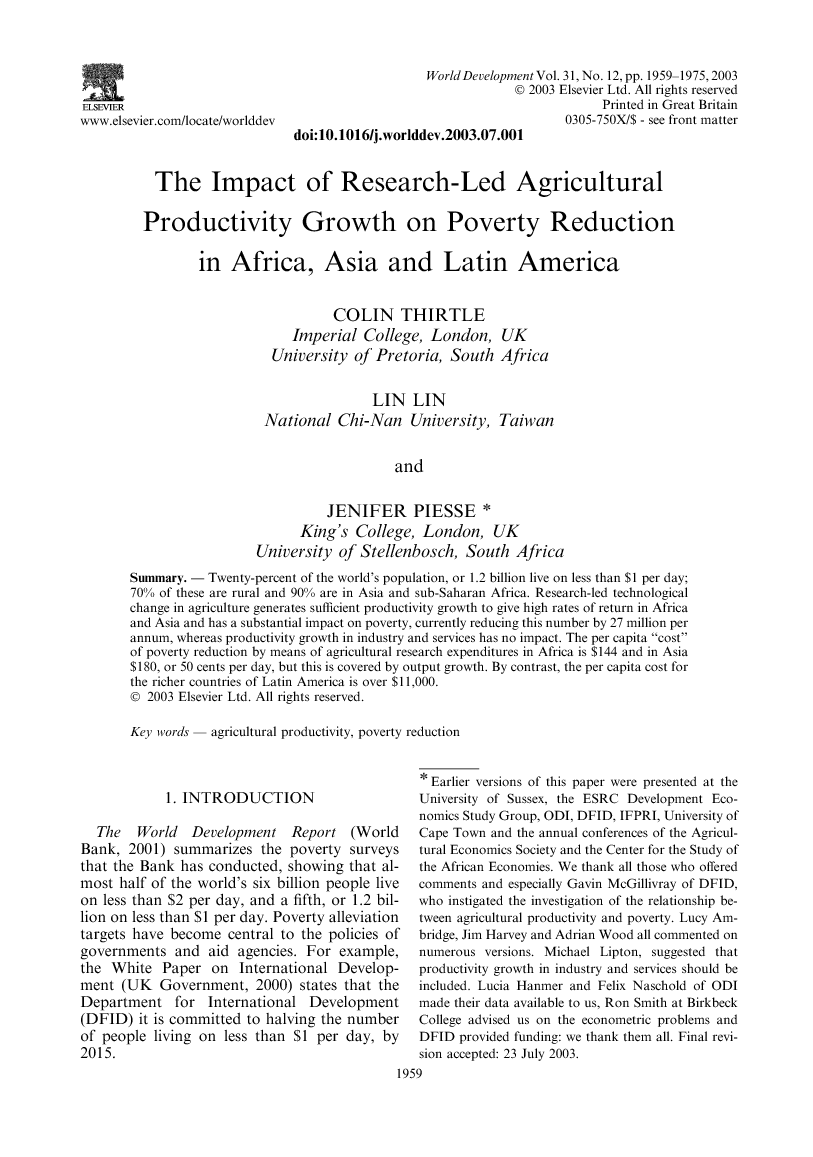 Twenty-percent of the world’s population, or 1.2 billion live on less than $1 per day; 70% of these are rural and 90% are in Asia and sub-Saharan Africa. Research-led technological change in agriculture generates sufficient productivity growth to give high rates of return in Africa and Asia and has a substantial impact on poverty, currently reducing this number by 27 million per annum, whereas productivity growth in industry and services has no impact. The per capita “cost” of poverty reduction by means of agricultural research expenditures in Africa is $144 and in Asia $180, or 50 cents per day, but this is covered by output growth. By contrast, the per capita cost for the richer countries of Latin America is over $11,000.

The World Development Report (World Bank, 2001) summarizes the poverty surveys that the Bank has conducted, showing that almost half of the world’s six billion people live on less than $2 per day, and a fifth, or 1.2 billion on less than $1 per day. Poverty alleviation targets have become central to the policies of governments and aid agencies. For example, the White Paper on International Development (UK Government, 2000) states that the Department for International Development (DFID) it is committed to halving the number of people living on less than $1 per day, by 2015. More than 90% of these 1.2 billion live in South Asia, East Asia and sub-Saharan Africa (SSA) and Chen and Ravallion (2000) show that although poverty has declined from 1987–98, especially in Asia, it has increased substantially in sub-Saharan Africa. Between two-thirds and three-quarters live in rural areas (estimates vary from 62%, CGIAR, 2000, to 75%, IFAD, 2001). The poorest have little or no land and they gain disproportionately from the employment generated by agricultural growth and from lower food prices, as do the urban poor, who spend much of their incomes on food. Thus, agricultural growth has a powerful impact on poverty, because it helps all poor people, whereas growth in the manufacturing and service sectors does not. The literature provides theoretical reasoning and piecemeal empirical evidence on the impact of agricultural growth on poverty reduction, mostly for single countries. But, the World Bank $1 per day poverty survey and inequality data, used in the World Bank growth studies, has not been used in investigating the impact of agricultural productivity growth. There is now a pooled set of 121 observations on 59 countries, which in combination with other variables, especially on agricultural research and development (R&D) expenditures, allows estimation of the poverty impact of agricultural R&D, for a broad selection of developing countries. This paper first uses all the available observations to establish that agricultural productivity has a significant impact on $1 per day productivity, whereas productivity in industry and services does not. Since these simple models are bound to be misspecified, other relevant variables are added, beginning with inequality, and in order to make key variables endogenous, a four-equation model that incorporates causal chains is developed, which allows inclusion of as many of the relevant variables as is possible. The causal chains cover all the relationships from agricultural R&D, to agricultural productivity growth, to GDP per capita, to inequality and poverty reduction. Section 2 reviews the literature and Section 3 describes the data, before progressing to simple models, which show that agricultural productivity growth has a substantial impact on poverty reduction, whereas productivity growth in industry and services does not. Section 4 introduces the causal chain model and presents the results. Section 5 shows that investment in agricultural R&D raises agricultural value added sufficiently to give very satisfactory rates of return, in both Africa (22%) and Asia (31%), but not in Latin America (−6%). Thus, in two continents, agricultural R&D pays for itself, as increased productivity results in broad-based growth, which reduces poverty. A 1% increase in yields reduces the numbers living in under $1 per day poverty by six and a quarter million, with 95% of these in Africa and Asia. Alternatively, the cost of removing one individual from $1 per day poverty in Africa is $144, in Asia $180, but in Latin America it is over $11,000.

This paper quantifies the impact of agricultural productivity growth on the incidence of poverty in the LDCs, measured by the percentage of the population living on less than $1 per day. The literature review shows that agricultural growth appears to be pro-poor, except in the Latin American countries, where extreme inequality in the distribution of incomes, and especially land, prevents the poor from gaining. The empirical analysis begins with simple regressions, which show that agricultural productivity growth has a substantial impact on poverty reduction, whereas productivity growth in industry and services does not. Including other explanatory variables in the regressions shows that inequality increases poverty and that GDP per capita growth reduces it. The limitations of the single equation approach are overcome by developing a four-equation, causal chain model, which incorporates many of the interactions between variables that affect poverty reduction. First, value-added per unit of land, is explained by R&D, fertilizer, labor and machinery per hectare, a land quality index and illiteracy. In the second equation, GDP per capita is explained by yields, land labor ratios, exports as a percentage of GDP and the percentage of the population that is illiterate. In the third equation, the Gini coefficient is explained by value-added per unit of land, GDP per capita, government expenditures as a percentage of GDP, the percentage of the population that is rural and a dummy variable for Latin America. In the last equation, the poverty index is explained by the Gini, GDP per capita, exports, government expenditures and gross fixed investment. The results are used to show that investment in agricultural R&D raises agricultural value added sufficiently to give very satisfactory rates of return within the agricultural sector, in both Africa (22%) and Asia (31%), but much less so in Latin America (10%). Thus, agricultural productivity growth gives rise to sufficient broad-based growth to pay for the R&D investment needed to generate the technologies required and there is a substantial effect on poverty reduction. A 1% increase in yields reduces the numbers living in under $1 per day poverty by over six million, with 95% of these in Africa and Asia. Finally, the per capita cost of poverty reduction in Africa is $144 and for Asia it is $180, but for Latin America it is $11,400. Thus, it is possible to establish that agricultural productivity growth has had a substantial impact on poverty reduction in the two poorest continents, as well as paying for itself by being an extremely profitable investment. The public sector national agricultural research systems, with the assistance of the CGIAR, can justly claim to have reduced poverty, probably more than any other single policy initiative. But, the link from yield growth back to public R&D is more tenuous and it would be naive to accept the poverty reduction costs without qualification. In many countries, it may be that technology generation is not the main problem. Extension is needed to reach the farmers; inputs must be supplied, credit made available and outputs sold; markets need to be developed; often, institutional and organizational development and infrastructure investment are the bottlenecks, so R&D is not a panacea. Even so, if the poor tax base and negative growth effects of relieving poverty by redistribution are considered, it is difficult to avoid the conclusion that the results of this study corroborate the World Bank view that growth relieves poverty more effectively. But, the results also show that the sector does matter: that growth needs to be agriculture led, and it is effective only in the poorer continents, but that is where the poor are, and predominantly in the rural areas. Thus, it is particularly unfortunate that by the 1990s there was no growth in African agricultural research expenditures and Asian expenditure growth had slowed down (Pardey & Bientema, 2001).