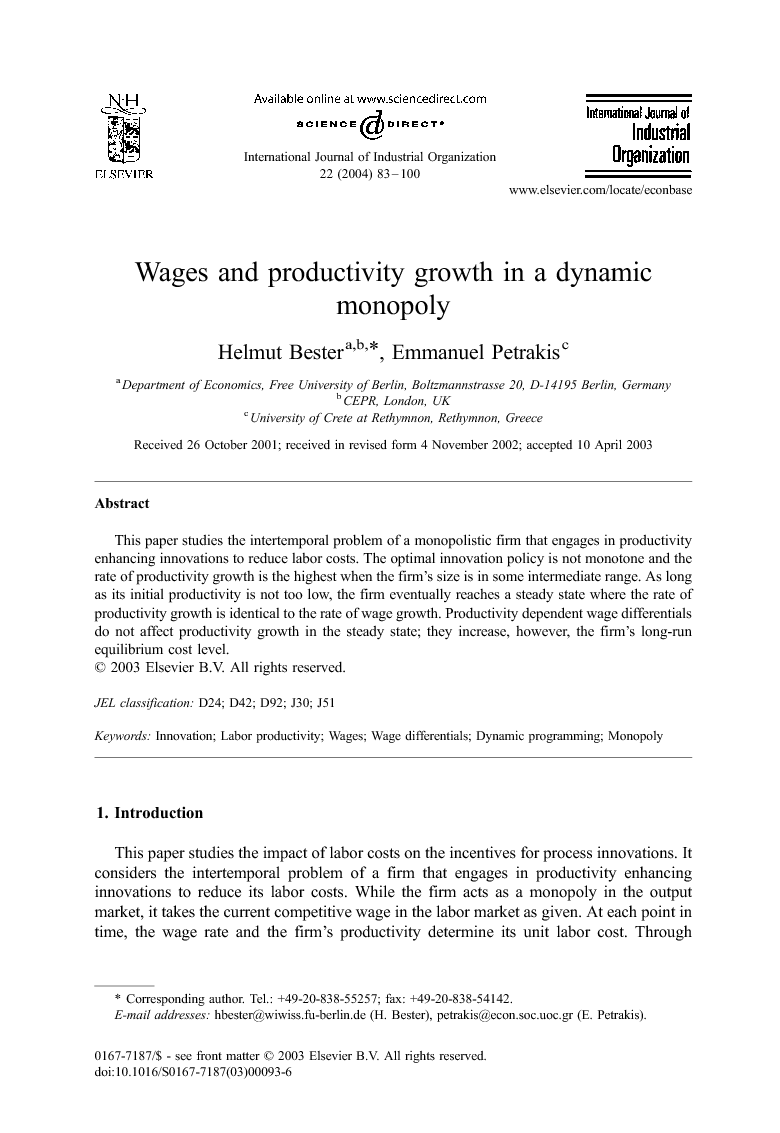 Modern industrialized countries are characterized by rapid technical progress accompanied with substantial increases in real wages. We have shown that, in a dynamic monopolistic industry, the firm optimally invests each period in productivity enhancing innovations to counterbalance increasing wages. Our analysis presents a dynamic cost-push argument of productivity growth. This argument is in the same sprit as Kleinknecht (1998) who emphasizes that labor market rigidities may have positive dynamic efficiency effects because they create stronger incentives to increase labor productivity. In our model higher current labor costs create stronger incentives for process innovations. Unless the wage level is too high, the monopolist's rate of productivity growth monotonically approaches the growth rate of wages and eventually the firm reaches a steady state where its unit cost of labor remains constant over time. Interestingly, long-run productivity growth only depends on the growth rate of wages and is thus independent of the initial level of wages. While the monopolist's unit labor cost as well as its output in the long-run depend only on the growth rate of wages, the long-run levels of labor productivity and employment depend on the level of wages. We have also analyzed the case where the rents stemming from productivity enhancing innovations are shared between the monopolist and its workers. Surprisingly, also in this case the long-run productivity growth only depends on the growth rate of wages and is independent of the share of profits over which the workers have claims (measured e.g. by the union's power). Hence, unionization does not influence long-run productivity growth, despite the fact that it depresses the short-run incentives for innovation. The union's bargaining power, however, determines the monopolist's long-run unit cost of labor and thus its output level: in the steady state its unit cost of labor is the higher and its output is the lower, the higher the union's power is. Nonetheless, long-run employment may actually be positively related to the union's bargaining power. This is so because unionization has a negative impact on labor productivity and reduces the sensitivity of the firm-specific wage towards changes in the market wage rate. Our model could be extended to consider dynamic imperfectly competitive markets. In an intertemporal model where at each date firms compete in prices or quantities it will be interesting to analyze how strategic interactions between the firms affect productivity growth in the short-run and in the long-run. Stimulated by the work of Schumpeter (1947), a large part of the literature on R&D relates the pace of innovative activity to market structure. An imperfect competition version of our model could combine this approach with our cost-push argument.