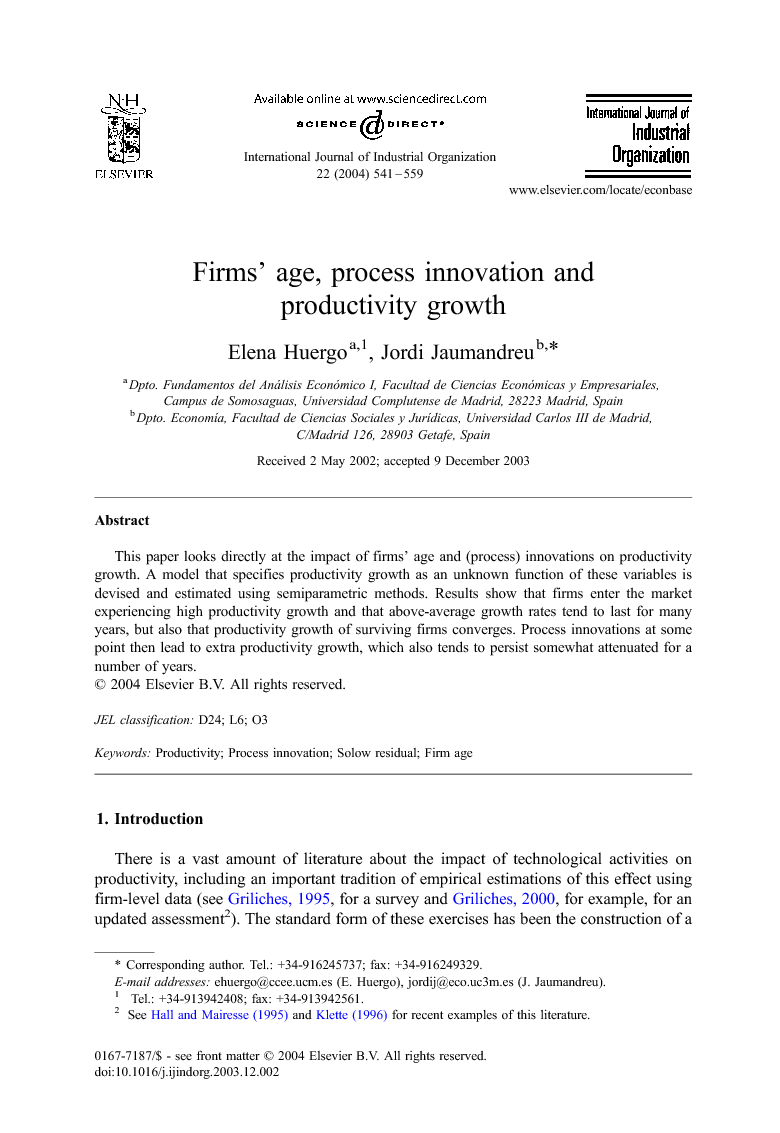 There is a vast amount of literature about the impact of technological activities on productivity, including an important tradition of empirical estimations of this effect using firm-level data (see Griliches, 1995, for a survey and Griliches, 2000, for example, for an updated assessment2). The standard form of these exercises has been the construction of a stock of knowledge capital, starting from R&D investment data, and its introduction as an additional input into the firms' production function. However, as Griliches (1979) already pointed out in his pioneering work, the relationship between productivity and the (constrained) weighted average of R&D expenditures embodies in a simplified way two very different and presumably complex processes: the production of innovations starting from R&D activities and the incorporation of these innovations to production. The knowledge capital construction and specification imply a number of important constraints on the form of these processes (see Klette, 1996, for a discussion and the relaxation of a number of these constraints). This provides an important reason for looking more closely at every one of these processes. Moreover, recently, data on the innovative output of R&D activities have become increasingly available, opening the possibility of these types of analyses. For example, Crepon et al. (1998) constitute an interesting departure from the traditional modelling using innovation data. This paper carries out an investigation focussed on the relationships between the introduction of innovations and the growth of productivity. It looks directly at the effects of innovation on total factor productivity growth, using (unbalanced) panel data on the age of more than 2300 Spanish manufacturing firms and their process innovations brought in during the period 1990–1998. The investigation is mainly intended to examine whether innovations really induce growth, the life span and time pattern of these productivity effects and the presumed heterogeneity associated with different frequencies of innovations. To answer these questions, it seems the effects of firm age must also be disentangled (in some sense, the first radical process innovation takes place with entry into a market). Conclusions contribute evidence on the effects of firms' innovative activity and have interesting implications for their modelling. Productivity growth is measured by means of the (cost shares-based3) Solow residual, corrected for (possible) nonconstant returns to scale. To address the presumably highly nonlinear relationships between productivity growth, age and process innovation, we devise a specific semiparametric model. A central piece of this model is the flexible estimation of the expectation of productivity growth conditional on age and innovations, while controls enter linearly. The main advantage of this modelling is that we avoid imposing any a priori functional form constraint on the impact of the key variables of age and innovation. Estimation can then be claimed to be fully robust, in the sense of being free of specification bias, in the involved relationships. This seems a particularly appropriate way to learn about a subject on which there is little evidence and for which we can hardly guess the specific form of the relationships. Estimates show that firms enter the market experiencing high productivity growth, and that above-average growth rates tend to last, although progressively weakened, for many years. The estimates also point out that productivity growth of surviving firms converges to different values according to activities and, on average, to almost 1.5% annually. Process innovations at some point then lead to some extra productivity growth, which tends to persist, although somewhat attenuated, for a number of years. If the introduction of process innovations then stops, however, innovation appears to be associated with an end to all productivity growth in the following years. The rest of the paper is organised as follows. Section 2 is devoted to establishing the framework of measurement of productivity and Section 3 to estimating the impact of age and innovation. Section 4 deals with the data and variables and Section 5 presents the empirical results. Section 6 comments on implications and concludes. Appendix A describes the sample and gives the definition of the variables employed.

This paper has looked directly at the productivity growth impact of process innovations introduced by firms along their different ages. The main findings may be summarized as follows. Newborn firms tend to show higher rates of productivity growth which, as time goes by, tend to converge on average to common (activity-specific) growth rates. Process innovation clearly induces, however, extra productivity growth at any point in this process. Extra growth tends to persist for a number of years, but it is followed by below-average productivity growth, very close to a halt, if innovation then stops. Let us briefly develop some interpretations and implications of these findings. Firstly, how can average productivity growth of every firm, extra growth of innovators and below-average growth of firms that cease for a long time to perform as innovators be reconciled? Average growth is likely to be based on ingredients like incorporated technological change, learning over time and the absorption of “spillovers.” We understand by absorption of spillovers the incorporation of productive ideas and methods, flowing more or less freely in the market, from the innovations and experience of others. These incorporations are unlikely to be classified as innovations by firms because they have been introduced years before in the market (and some of them are perhaps already partially commercialised). The same technical ideas and methods would in this way play several roles. In particular, they would be an important part of average productivity growth as well as the reason for the leading productivity growth of their (early) introducers as innovations, but they cannot definitely bring in new productivity growth to the introducers who have remained at the initial point. Productivity of these firms will have, in the end, grown by more or less the same amount as the productivity of any noninnovator. Our estimates then suggest an industry full of these “dynamic” spillovers, in which process innovations are generalised with some lag, bringing productivity growth to even the noninnovative firms. Secondly, entrant firms are likely to derive their high rates of productivity growth from a mix, with unknown weights, of innovative processes and the course of learning. Notice that our estimation does not say a word about efficiency levels, but only indicates that new firms' productivity increases more rapidly. Then, in principle, we can attribute these productivity improvements either to the potential of their completely new processes brought into the market to jump away from the average efficiency levels or just the necessity to adapt quickly to them. Evidence on low surviving rates of entrant firms seems to point to the importance of the learning factor. But trying to disentangle the relative weight of these two effects seems a relevant question which cannot be answered with the present model. Thirdly, the impact of process innovation seems to spread beyond what can be picked up by the simplest “knowledge capital” models. In these models, the perpetual inventory method of capital stock construction implies time productivity growth effects proportional to the contemporaneous net rates of R&D investment (investment over cumulated capital minus depreciation). The obtained evidence departs from this model in several aspects. The productivity growth impact takes place when a process innovation is introduced and it is spread over a number of years. But “knowledge capital” models possess the interesting feature of trying to weigh innovations by their value. This suggests the relevance of trying to advance in the modelling of innovation-specific investment weights and their dynamic effects.