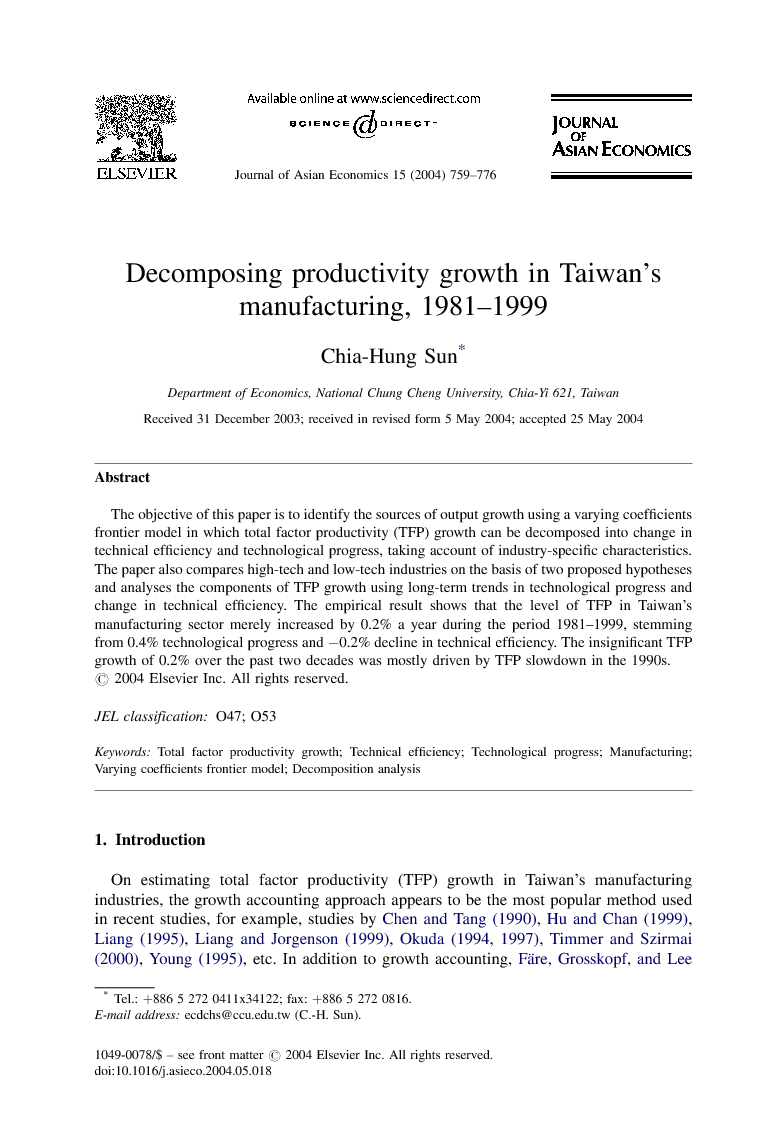 The objective of this paper is to identify the sources of output growth using a varying coefficients frontier model in which total factor productivity (TFP) growth can be decomposed into change in technical efficiency and technological progress, taking account of industry-specific characteristics. The paper also compares high-tech and low-tech industries on the basis of two proposed hypotheses and analyses the components of TFP growth using long-term trends in technological progress and change in technical efficiency. The empirical result shows that the level of TFP in Taiwan’s manufacturing sector merely increased by 0.2% a year during the period 1981–1999, stemming from 0.4% technological progress and −0.2% decline in technical efficiency. The insignificant TFP growth of 0.2% over the past two decades was mostly driven by TFP slowdown in the 1990s.

Unlike earlier studies, this paper, using the varying coefficients frontier model, shows the average annual TFP growth rate in Taiwan’s manufacturing sector fell to only 0.2% during the period 1981–1999. Moreover, this study also finds an average annual TFP growth rate of 2.8% between 1981 and 1991, implying a dramatic slowdown of TFP growth in the 1990s. In summary, there are a number of reasons for the differences in the results of this study and earlier studies. First, in contrast to the growth accounting assumption of fully efficient firms, the model used in this study makes allowance for inefficient behavior by firms. Second, different approaches used to construct the production frontier may explain the discrepancies. The varying coefficients frontier approach used in this study considers the possibility of heterogeneous applications of production technology, and develops the concept of the best practice production frontier for individual industries. Conversely, the conventional stochastic frontier approach used by some studies does not allow for industry-specific characteristics and applies constant capital and labour shares across industries, thus ignoring the possibility of heterogeneous behaviour by firms in applying the best available technology. Finally, the adjustment of quality improvement embodied in capital and labour inputs has been cautiously employed by the current study using the estimates of Young (1995) whereas the earlier studies do not make this adjustment and therefore underestimate input growth and thus overstate TFP growth.