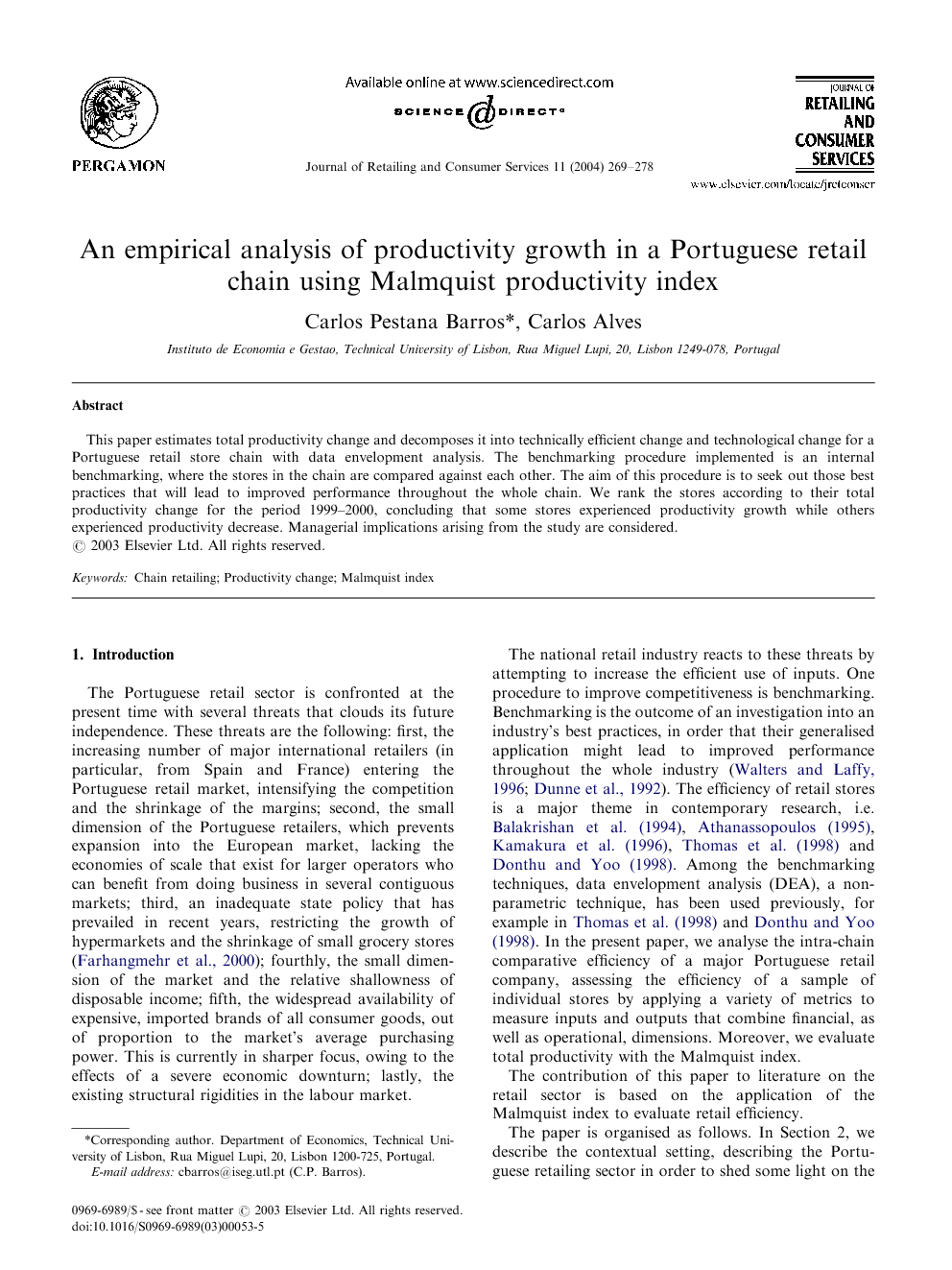 This paper estimates total productivity change and decomposes it into technically efficient change and technological change for a Portuguese retail store chain with data envelopment analysis. The benchmarking procedure implemented is an internal benchmarking, where the stores in the chain are compared against each other. The aim of this procedure is to seek out those best practices that will lead to improved performance throughout the whole chain. We rank the stores according to their total productivity change for the period 1999–2000, concluding that some stores experienced productivity growth while others experienced productivity decrease. Managerial implications arising from the study are considered.

The Portuguese retail sector is confronted at the present time with several threats that clouds its future independence. These threats are the following: first, the increasing number of major international retailers (in particular, from Spain and France) entering the Portuguese retail market, intensifying the competition and the shrinkage of the margins; second, the small dimension of the Portuguese retailers, which prevents expansion into the European market, lacking the economies of scale that exist for larger operators who can benefit from doing business in several contiguous markets; third, an inadequate state policy that has prevailed in recent years, restricting the growth of hypermarkets and the shrinkage of small grocery stores (Farhangmehr et al., 2000); fourthly, the small dimension of the market and the relative shallowness of disposable income; fifth, the widespread availability of expensive, imported brands of all consumer goods, out of proportion to the market's average purchasing power. This is currently in sharper focus, owing to the effects of a severe economic downturn; lastly, the existing structural rigidities in the labour market. The national retail industry reacts to these threats by attempting to increase the efficient use of inputs. One procedure to improve competitiveness is benchmarking. Benchmarking is the outcome of an investigation into an industry's best practices, in order that their generalised application might lead to improved performance throughout the whole industry (Walters and Laffy, 1996; Dunne et al., 1992). The efficiency of retail stores is a major theme in contemporary research, i.e. Balakrishan et al. (1994), Athanassopoulos (1995), Kamakura et al. (1996), Thomas et al. (1998) and Donthu and Yoo (1998). Among the benchmarking techniques, data envelopment analysis (DEA), a non-parametric technique, has been used previously, for example in Thomas et al. (1998) and Donthu and Yoo (1998). In the present paper, we analyse the intra-chain comparative efficiency of a major Portuguese retail company, assessing the efficiency of a sample of individual stores by applying a variety of metrics to measure inputs and outputs that combine financial, as well as operational, dimensions. Moreover, we evaluate total productivity with the Malmquist index. The contribution of this paper to literature on the retail sector is based on the application of the Malmquist index to evaluate retail efficiency. The paper is organised as follows. In Section 2, we describe the contextual setting, describing the Portuguese retailing sector in order to shed some light on the threats mentioned above. In Section 3, we survey the existing literature on the topic, with a view to highlighting the contribution that the present paper seeks to make. In Section 4, we explain the theoretical framework supporting the model used. In 5 and 6, we present the data and results. In Section 7, we consider the managerial implications of the study. In Section 8, we put forward the limitations and possible extensions of the study and finally, in Section 9, we make our concluding remarks.

This article has proposed a simple framework for the evaluation of retail outlets and the rationalisation of their operational activities. The analysis is based on a DEA model that allows for the incorporation of multiple inputs and outputs in determining the relative efficiencies. Benchmarks are provided for improving the operations of poorly performing retail outlets. Several interesting and useful managerial insights and implications from the study are raised. The general conclusion is that the majority of the outlets analysed are efficient, while a proportion of them is not efficient. For the latter group, we identified peer groups among the efficient outlets, as well as the slacks that they should adjust in order to achieve the efficient frontier. The results suggest that scale economies are determinant factors of efficiency in this sector. More investigation is needed to address the limitations mentioned.