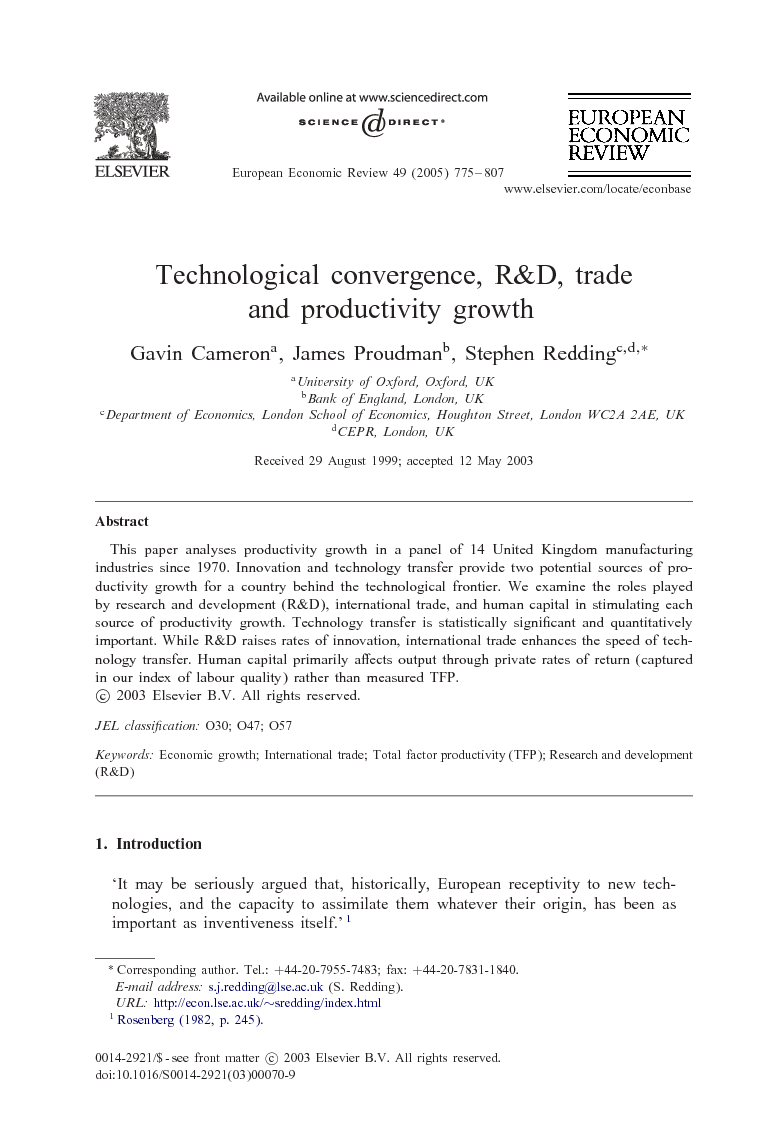 This paper examines the determinants of productivity growth at the industry-level in the United Kingdom since 1970. We began by outlining innovation and technology transfer as two sources of productivity growth for a country behind the technological frontier. The difference in levels of total factor productivity (TFP) between the United Kingdom and a frontier country (the United States) is used as a direct measure of the potential for technology transfer, and we employ extremely general measures of TFP that control for a variety of sources of potential measurement error suggested in the literature on TFP measurement. Our framework allows for knowledge spillovers from both formal research and development (R&D) and the informal activities not captured in R&D statistics, while also controlling for observable and unobservable characteristics of countries and industries that affect the potential for technology transfer. We find a positive and statistically significant effect of distance from the technological frontier on rates of productivity growth. Other things equal, the further an industry lies behind the technological frontier, the higher its rate of TFP growth. This finding is robust across a wide range of econometric specifications, to instrumenting distance from the technological frontier, to the use of alternative TFP measures, and to the inclusion of a series of control variables. A key advantage of our approach is that we are able to explicitly test whether a number of variables proposed as determinants of productivity growth (such as R&D, international trade, and human capital) affect productivity growth directly (through rates of innovation) or indirectly through distance from the technological frontier (technology transfer). Unlike much of the literature, which assumes that technology transfer occurs through a particular mechanism such as international trade, we test econometrically whether international trade plays a role against the alternatives that its pace is determined by domestic ‘absorptive capacity’ (in the form of human capital and R&D investments) and that it proceeds autonomously (independently of the economic variables considered). We find that R&D affects rates of UK productivity growth through innovation, while international trade facilitates the transfer of technology. These results are again robust across a wide range of econometric specifications and to instrumenting international trade in the UK with a measure based on OECD trade that captures exogenous variation in the degree of international integration in individual industries over time. Our preferred measure of TFP weights numbers of production and non-production workers in a country-industry by their shares of the wage bill. Once one controls for any increased productivity of non-production workers reflected in their wages (a private rate of return), we find no evidence of an additional effect of human capital on productivity growth (no evidence of externalities). This is consistent with the empirical growth literature's finding of a positive effect of human capital on growth, but suggests that this effect corresponds to a private rate of return. Taken together, our results emphasize the importance of technology transfer for countries behind the technological frontier. We find relatively rapid convergence of countries towards steady-state levels of relative TFP within individual industries, suggesting that observed cross-country productivity differences largely reflect systematic determinants, including fixed characteristics of countries and industries (such as location and institutions captured in the fixed effect), investments in R&D, and openness to international trade.