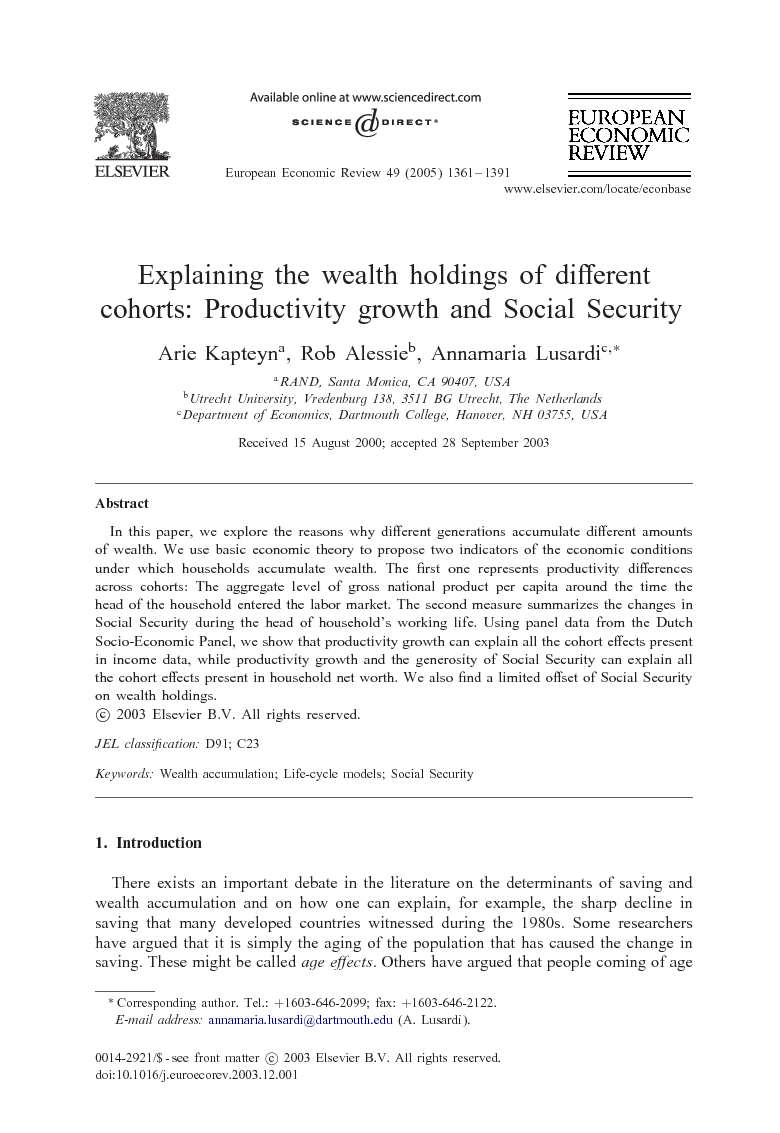 In this paper, we explore the reasons why different generations accumulate different amounts of wealth. We use basic economic theory to propose two indicators of the economic conditions under which households accumulate wealth. The first one represents productivity differences across cohorts: The aggregate level of gross national product per capita around the time the head of the household entered the labor market. The second measure summarizes the changes in Social Security during the head of household's working life. Using panel data from the Dutch Socio-Economic Panel, we show that productivity growth can explain all the cohort effects present in income data, while productivity growth and the generosity of Social Security can explain all the cohort effects present in household net worth. We also find a limited offset of Social Security on wealth holdings.

We have examined the income and wealth holdings of different cohorts. While many explanations have been given for observed differences among cohorts, disentangling these explanations is difficult. For example, simple cohort dummies cannot distinguish between differences in preferences and differences in economic circumstances. Our strategy consists of devising indicators that can summarize the economic conditions over time. A good proxy for the differences in the income profiles of households is the level of aggregate income per capita around the time the head of the household entered the labor market. Similarly, we have devised a proxy for the changes in the SS system at the beginning of or during the working life of the head of the household. We find that the inclusion of a measure of productivity growth in our equations for income obviates the need to include cohort dummies. Similarly, productivity growth in permanent income and changes in SS can explain all cohort effects in wealth. Thus, past economic conditions can explain why generations differ in their wealth holdings and we do not need to resort to differences in preferences or other reasons to explain the differences in wealth holdings across generations. Obviously, there are other economic conditions that could be important for explaining the differences in wealth accumulation, including precautionary motives, longevity, changes in house prices, bequest motives, changes in demographics and female labor supply. Undoubtedly, these factors play a role. The strategy in this paper has been, however, to simplify the model of wealth accumulation as far as possible while still being able to explain important features of the data. The fact that our two proposed economic indicators for productivity growth and SS are effective in explaining the wealth holdings of different cohorts suggests that either these other factors are very strongly correlated with our indicators, or that the other factors are of secondary importance in explaining the wealth accumulation of different cohorts.