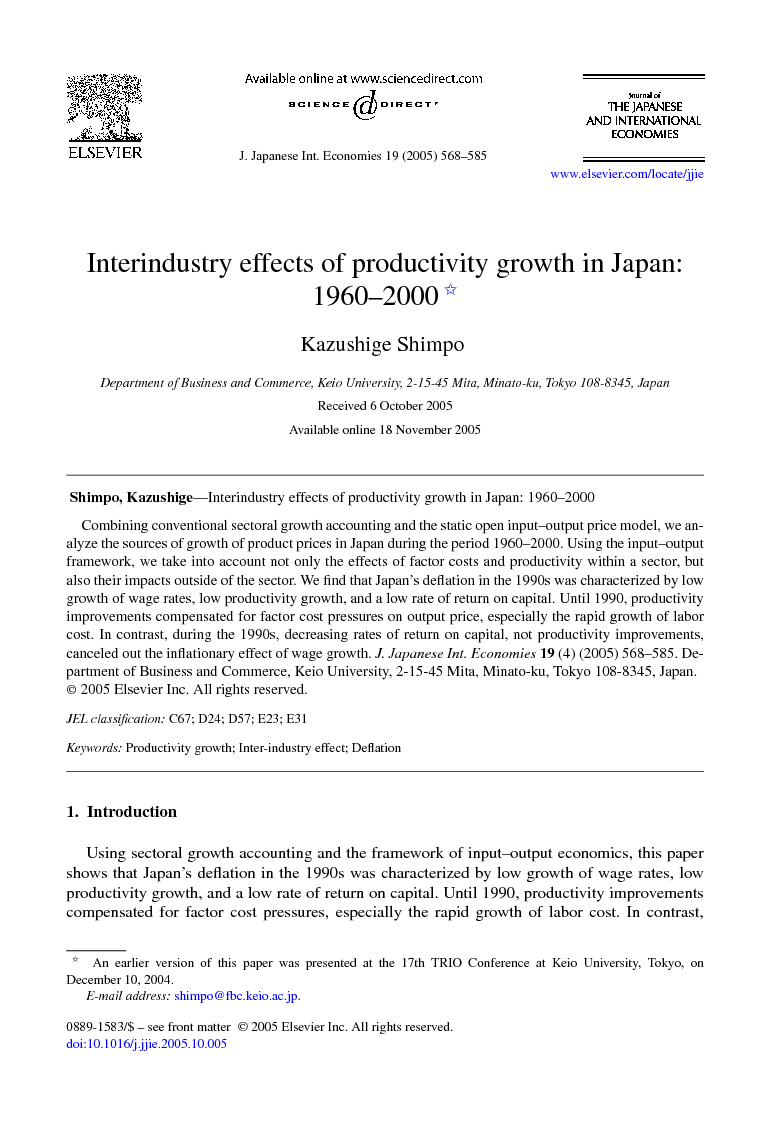 Combining conventional sectoral growth accounting and the static open input–output price model, we analyze the sources of growth of product prices in Japan during the period 1960–2000. Using the input–output framework, we take into account not only the effects of factor costs and productivity within a sector, but also their impacts outside of the sector. We find that Japan's deflation in the 1990s was characterized by low growth of wage rates, low productivity growth, and a low rate of return on capital. Until 1990, productivity improvements compensated for factor cost pressures on output price, especially the rapid growth of labor cost. In contrast, during the 1990s, decreasing rates of return on capital, not productivity improvements, canceled out the inflationary effect of wage growth. J. Japanese Int. Economies19 (4) (2005) 568–585.

Using sectoral growth accounting and the framework of input–output economics, this paper shows that Japan's deflation in the 1990s was characterized by low growth of wage rates, low productivity growth, and a low rate of return on capital. Until 1990, productivity improvements compensated for factor cost pressures, especially the rapid growth of labor cost. In contrast, during the 1990s, decreasing rates of return on capital, not productivity improvements, canceled out the inflationary effect of wage growth. The Japanese economy experienced prolonged stagnation and deflation during the 1990s, and this period is often referred to as the lost decade. A recent study by Hayashi and Prescott (2002) argues that the Japanese economy nonetheless stayed on an equilibrium growth path during this period. Given a path of low growth rates of productivity in the 1990s, and with careful consideration of the institutional reduction of work hours, their standard aggregate growth model successfully predicts two of the most salient phenomena of the lost decade: the increasing capital–output ratio and the low rate of return on capital. They conclude that “the only puzzle is why the TFP growth was so low subsequent to 1991.” Nishimura and Saito (2003) argue that the low rate of return on capital had been continuing since the 1970s. Until 1990, private firms kept investment high because their optimistic expectation for rapid economic growth made these investments profitable, but in the lost decade, the productivity slowdown rendered their expectations over-optimistic and their investments not profitable. Using industry-level growth accounting with capital inputs divided into information technology and other categories, Jorgenson and Nomura (2005) and Nishimura and Shirai (2003) find that the information-technology intensive sectors showed modest recovery in their productivity growth in the late 1990s. However, the use of information technology was not widespread in this decade. Particularly in back-office intensive service sectors, productivity improvements brought on by information technology were not observed. These industry-level studies suggest that consideration of inter-industry effects is essential in analyzing the impact of a productivity change since efficiency gains or losses occurring in one sector are not limited to that sector. The gains or losses expand through the use of produced inputs, such as intermediate inputs and capital inputs. In this paper, we reveal the inter-industry effects by combining conventional sectoral growth accounting and the static open input–output price model. Using the price model, we can analyze the quantitative relationship among product prices, factor costs and productivity as well as inter-industry effects. Hulten (1978) introduced the concept of effective rate of productivity change, which takes into account not only the productivity change originating in one sector but also the impact of the productivity change on other sectors through transactions of intermediate inputs. Aulin-Ahmavaara (1999) developed the idea of effective productivity change using the static input–output price model and also proposed fully effective rates of productivity change using the dynamic closed input–output price model. In this model, capital inputs are treated as produced inputs as well as intermediate inputs. Concerned with conducting empirical studies of the Japanese economy, Kuroda et al. (1987) developed the model used in this paper and analyzed forward linkage among sectors and sectoral contributions to aggregate productivity growth during the period 1960–1979. They did not, however, perform the decomposition of product prices into effective rates of productivity growth. Hayami (1993) incorporated fully effective rates of productivity growth into a system of differential equations of product prices, but only showed numerical examples. Kuroda and Nomura (2004) actually calculated the paths of fully effective rates of productivity growth during the period 1960–1990 based on Leontief's dynamic inverse. The remainder of this paper is organized as follows: Section 2 presents our analytical framework pioneered by Kuroda et al. (1987) and defines effective productivity growth within our model. In Section 3, we analyze the forward linkages among sectors and the impacts of sectoral productivity growth on the economy as a whole. We also examine the decomposition of the growth rates of product prices and show how different the lost decade was from previous periods. Section 4 concludes the paper.

In this paper we focused on the inter-industry effects of productivity growth upon product prices as well as the aggregated economy-wide output price, and analyzed the sources of price deflation in Japan in the 1990s. As shown in this paper, production sectors are inter-related via forward and backward linkages which are constrained by the technological network described in input–output tables. To a greater or lesser extent, through backward linkages, different production sectors enjoy the benefits brought about by productivity improvements generated in the sectors to which they are linked. Before 1990, productivity improvements compensated for the pressure for output prices to increase due to soaring labor costs, and this led to economy-wide economic growth along with rapid accumulation of capital backed up by a low rate of return on capital. In the 1990s, however, decreases in wage rates caused a reduction in the growth of labor income. Deterioration of sectoral productivity growth and a low rate of return on capital meant a scarcity of profitable investment opportunities. Weakened linkages among sectors in this period reduced the strength of inter-industry effects of productivity growth. Using sectoral growth accounts combined with input–output economics, we demonstrated that all these factors simultaneously resulted in Japan's prolonged economic stagnation and deflation in the 1990s.