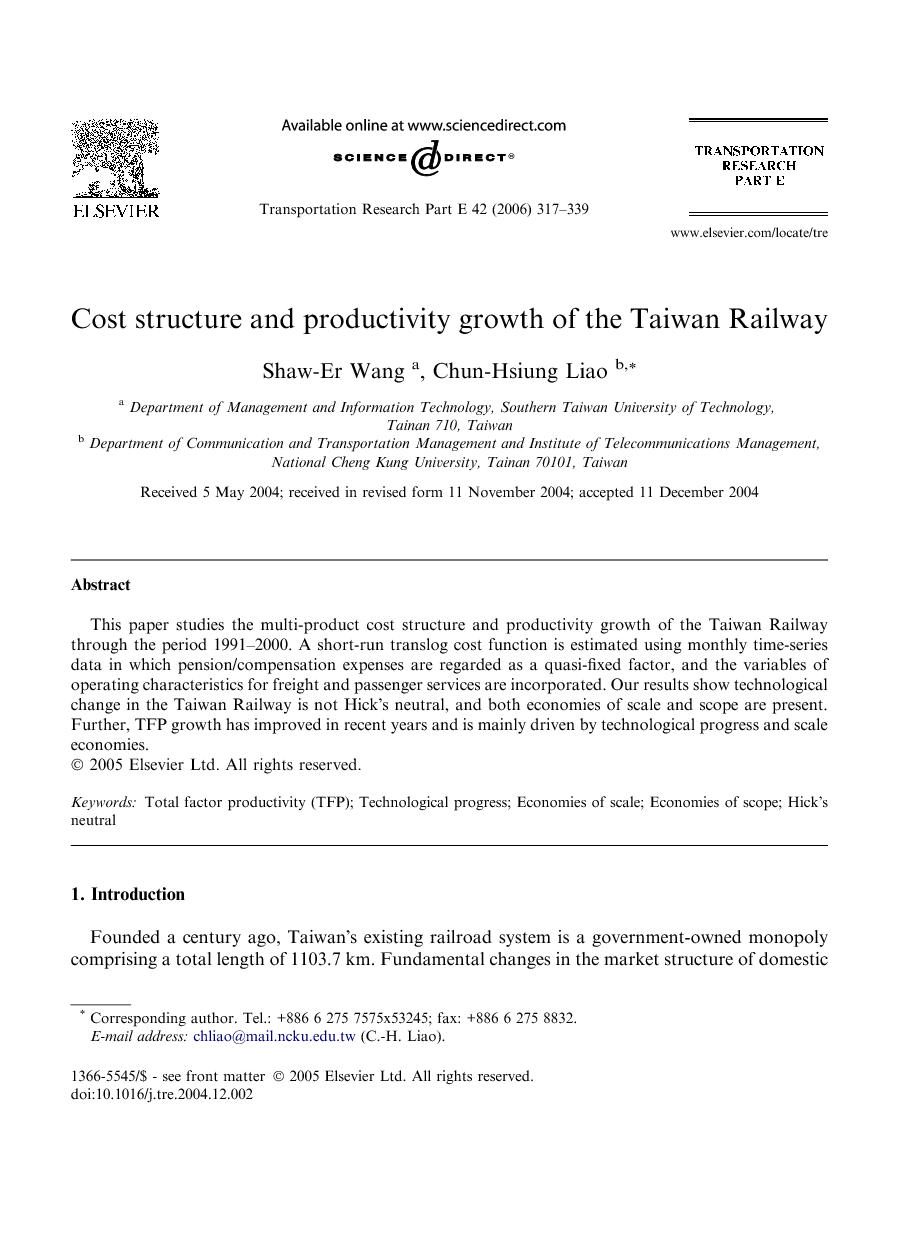 This paper studies the multi-product cost structure and productivity growth of the Taiwan Railway through the period 1991–2000. A short-run translog cost function is estimated using monthly time-series data in which pension/compensation expenses are regarded as a quasi-fixed factor, and the variables of operating characteristics for freight and passenger services are incorporated. Our results show technological change in the Taiwan Railway is not Hick’s neutral, and both economies of scale and scope are present. Further, TFP growth has improved in recent years and is mainly driven by technological progress and scale economies.

Founded a century ago, Taiwan’s existing railroad system is a government-owned monopoly comprising a total length of 1103.7 km. Fundamental changes in the market structure of domestic transport have occurred since the completion of Chung-san Highway in 1978. As a result, the monopolistic position of the Taiwan Railway has been challenged by fierce competition from other transport modes (such as auto vehicles, highway express buses, and air transport). In the past 10 years, its market share of inter-city passenger transport in the island has dropped to 13% (if auto vehicles are included). Moreover, it currently serves only 5.96% (down from 13.87%) of freight transport. Further, the Labor Basic Law in 1988 increased overtime expenses three-fold and the number of retired employees with monthly pensions has also increased by 14% per year. All these factors have contributed to the Taiwan Railway’s financial losses. In addition, the Taiwan Railway’s operational environment is rigid and its operational costs continue to rise rapidly. In particular, up to the end of 2001, personnel expenses were 87% of its total revenue and total accumulated losses had risen to 3 billion US$. Clearly, personnel expenses are a major financial burden for the Taiwan Railway, among which pension/compensation expenses accounted for just under half (41.12%) in 2000. The 1995 Pension/Compensation Act requires the Taiwan Railway to be responsible for its pension/compensation expenses.1 The number of retired employees with monthly pensions at the end of 2000 was 14,386 compared with 15,980 employees working for the company in 2000. Moreover, investments in hardware facilities have been insufficient for a long time. As a consequence, mechanical equipments and electronic components are old and outdated. The percentage of car equipment over 30 years old was 21.6% in 1991 and rose to 36.2% in 2000. Maintenance costs thus increase yearly. Due to increasing financial losses, the Taiwan Railway has not been able to replace aging pieces of equipment, and can only try to maintain them. This leads to serious safety concerns. The Taiwan Railway also faces strong potential competition from the brand-new “High Speed Railway” system in the near future.2 It is commonly believed that a considerable number of long-distance travelers will inevitably switch to the High Speed Railway. As a result of the problems described above, the most crucial issue for the Taiwan Railway is how to optimize its operating efficiency and improve its productivity. Unfortunately, few studies to-date have focused on the Taiwan Railway. In this paper, we establish a short-run translog cost function based on monthly data over the time period January 1991 to December 2000. Since pension/compensation expenses refer to retirees only, we treat pension/compensation expenses as a quasi-fixed cost which cannot be adjusted in the short-run.3 The operating characteristics of passenger and freight services (such as average travel length, seat utilization, average length of haul) are incorporated in the cost function to fully reflect the operating characteristics of the Taiwan Railway. The purpose of this paper is to study the multi-product cost structure and productivity growth of the Taiwan Railway in the 1990s. First, we analyze the influential factors of productivity growth and factor utilization. We next study output cost elasticity and short-run marginal cost to establish whether the Taiwan Railway displayed economies of scale and scope. Finally, we examine technological changes and estimate total factor productivity (TFP) growth. The remainder of this paper is organized as follows. In the next section we review the related literature. Section 3 sets up the model specification of the translog cost function and discusses the nature of the variables that are entered as its arguments. The methodology to measure productivity growth is then outlined. Our empirical results are presented in Section 4 and measurement of productivity growth is undertaken in Section 5. Finally, a brief summary of study finding and our conclusions are presented in Section 6. All tables and figures are to be found in the Appendix at the end of the paper.

In this paper, we have investigated changes in the cost structure and productivity of the Taiwan Railway, using monthly time series data from January 1991 to December 2000. To highlight the effect of actual operations upon its costs, we regarded pension/compensation expenses as a quasi-fixed factor, which could not be adjusted in the short-run. By so doing, productivity changes resulting from the improvement in operational efficiency were not obscured by its historic financial burden. The main contribution of the paper is that it shows how to explore cost structure and productivity growth. We have attempted to fully exploit every piece of information contained in a translog specification (productivity, technical change, input demand, economies of scale and scope, etc.) to address issues pertinent to the Taiwan Railway. We hope the approach utilized here can serve as a model for other researchers endeavoring to apply the same procedure. The empirical results indicated that technological change in the Taiwan Railway was not neutral. In other words, there existed an interactive relationship between time and other variables, such as output (long-distance passenger transport) and inputs (labor, intermediate and mainline capacity utilization). TFP growth rates were all positive, except in 1991, 1992 and 1998, the highest growth rate reaching 1.08% in 1997. Moreover, the main contributor to TFP growth was technological progress (disregarding the overstated pricing effect). The simulation results show that the higher the class and service quality of a passenger transport system, the higher its marginal cost. The Taiwan Railway displays both scale economies and scope economies. Thus, cost benefits can be reaped by expanding its output levels and by producing multiple products. Moreover, Qscope results indicated there exist economies of joint production (passenger and freight services) and/or cost complementarities (shared inputs). Hence, it is not appropriate to divest freight from rail, especially for bulk commodities. All these issues deserve serious attention and further in-depth investigation. As for the marginal costs of services provided by the Taiwan Railway, freight transport was ranked the highest while short-distance passenger transport was ranked the lowest. Comparing marginal costs with tariffs, the Taiwan Railway had positive profit margins for long-distance passenger service, i.e. Tse-Chiang Limited Express and Chu-Kuang Limited Express were lucrative. In particular, the former had the greatest profit margin therefore 250 new Tse-Chiang Expresses have been recently introduced. However, as a result of fierce incoming competition from High Speed Railway, it will inevitably lose a considerable number of long-distance passengers.8 Hence, how the Taiwan Railway transforms in the future is a critical issue, and many researchers are beginning to concentrate their efforts on it. Further, the freight service is underpriced, unprofitable and costly, since its tariff is less than its marginal cost. Whether or not freight traffic should move away from rail is a hotly debated topic. Evidence suggests that freight is moving from rail to roads (by truckload and less-than-truckload), as demonstrated by the fact that 93.97% of freight in 2000 was transported by trucking. Finally, since freight service is underpriced, Taiwan’s government could adopt Ramsey pricing or discriminatory pricing as a tool to finance the Taiwan Railway and attract demand.