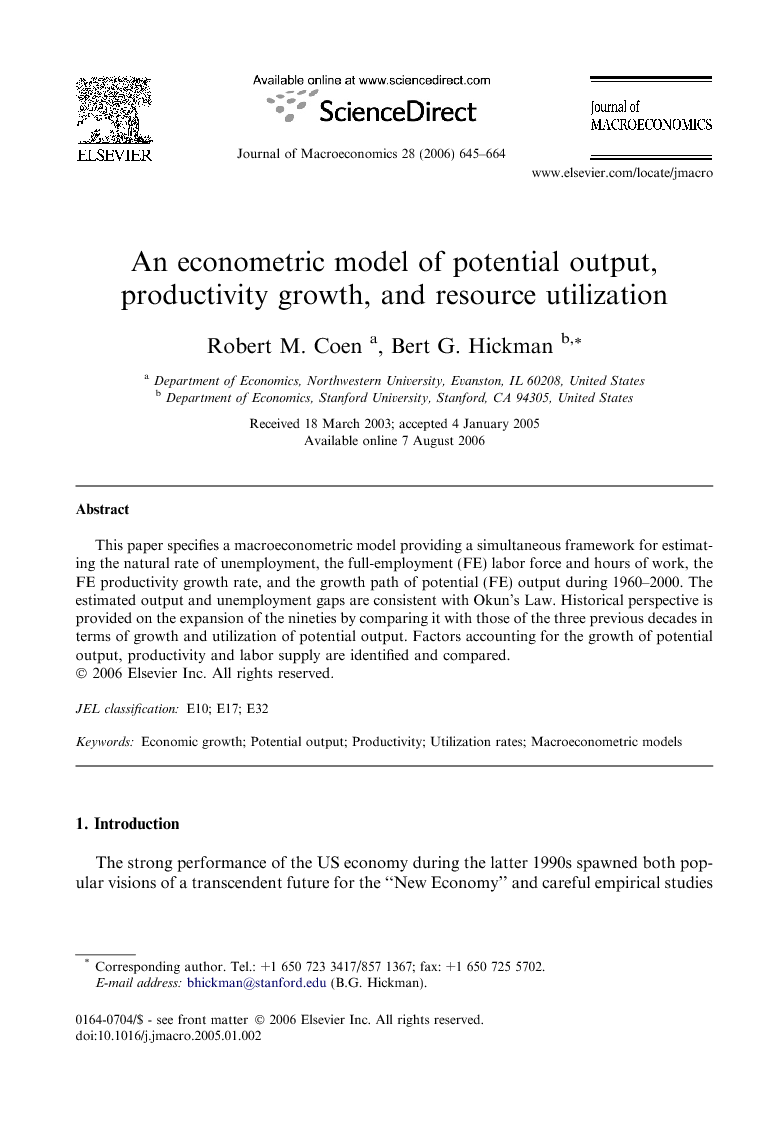 This paper specifies a macroeconometric model providing a simultaneous framework for estimating the natural rate of unemployment, the full-employment (FE) labor force and hours of work, the FE productivity growth rate, and the growth path of potential (FE) output during 1960–2000. The estimated output and unemployment gaps are consistent with Okun’s Law. Historical perspective is provided on the expansion of the nineties by comparing it with those of the three previous decades in terms of growth and utilization of potential output. Factors accounting for the growth of potential output, productivity and labor supply are identified and compared.

The strong performance of the US economy during the latter 1990s spawned both popular visions of a transcendent future for the “New Economy” and careful empirical studies of that experience.1 This paper provides historical perspectives on key characteristics of the expansion of 1991–2000, by comparing it with the previous long expansions of 1961–1969 and 1982–1990 and the chaotic period of oil shocks and responses during 1970–1981. For each sub-period, we examine the paths of actual output and productivity relative to those of potential output and productivity. The potential measures are obtained by solving a system of estimated labor demand and supply equations, subject to the condition that the labor market clears at the natural rate of unemployment. Utilizing these model-based assessments of potential, we compare the 1991–2000 expansion with previous business cycles in terms of growth and utilization of potential and also identify and compare factors accounting for the growth of potential output, productivity, and labor supply, namely, the contributions of capital deepening and technical progress to the growth of potential productivity, the contributions of changes in real wages and tax policy to the potential rate of capital deepening, and contributions of changes in average hours, labor force participation rates, and natural unemployment to potential growth of labor supply. The salient features of our model of potential, or full-employment (FE), output are described in Section 2. The next sections explain how we model the natural rate of unemployment (Section 3), FE labor supply (Section 4), and FE labor demand (Section 5). Section 6 presents the additional relationships and identities needed to close the model and solves these relationships jointly for FE output. The solution values are then used to measure the output and unemployment gaps during 1960–2000 (Section 7) and to analyze the role of productivity gains and other determinants of actual and potential output growth (Section 8) during the sub-periods of interest. Our results are summarized in Section 9. A key ingredient of the model is the specification of an aggregate Cobb–Douglas production function with Hicks-neutral technical change at a time-varying rate. Imperfect competition is assumed, with firms choosing inputs to minimize cost and setting prices as a markup on unit labor cost. Our data is from official government sources in the United States, including the national income accounts from the Bureau of Economic Analysis (BEA) and labor force and productivity data from the Bureau of Labor Statistics (BLS). The BLS series on labor productivity, output, hours, and related data in the non-farm business (NFB) sector are the most widely cited productivity measures and are featured in our analysis.

We have specified and estimated a simultaneous model of labor demand and supply that can be used to generate a FE growth path of the US economy that is consistent with attaining the natural rate of unemployment each year. Solving the model yields annual estimates of FE output, hours, productivity, real wages, and labor force that provide yardsticks for assessing actual economic performance. Our particular concern has been to see how the 1991–2000 expansion ranks in terms of growth and utilization of potential relative to the previous long expansions of 1961–1969 and 1982–1990 and the unsettled 1970–1981 period. Because our potential path is derived from a structural model, we are able to identify the contributions of key endogenous and exogenous variables to developments of potential output and related variables over the periods of interest. The output and unemployment gaps generated by the model yield an estimated Okun’s Law coefficient of −1.9, close to the current consensus value of −2.0, so that our estimates of the natural rate of unemployment and the level of potential output are internally consistent and satisfy the relationship predicted by accepted macroeconomic theory and measurement, giving support to the model specification. The actual Solow residuals calculated from our aggregate Cobb–Douglas production function closely track the multifactor productivity index of the BLS, despite the fact that the latter is estimated by a different methodology and in considerable underlying industry detail, adding to our confidence in this element of the model. A counterfactual experiment with our demographic variant of the empirical model of the NAIRU developed by Staiger, Stock and Watson indicated that demographic shifts accounted for 91% of the decline in the estimated natural rate between 1982 and 1991, whereas the corresponding figure for 1992–2000 was only 16%. Our analysis indicates that the productivity surge observed during the second half of the 1990s was largely a cyclical phenomenon as the economy caught up to its potential path, with actual productivity growth in the NFB sector increasing 1.02 percentage points and FE productivity growth only 9 basis points from the first half of the expansion. Even though potential productivity growth did not accelerate much in the second half of the 1990s, growth of potential output did, owing to a 0.5 percentage point rise in labor supply growth. Because the recovery in the early nineties started from a low level of output utilization, and because potential growth accelerated moderately in 1996–2000, the expansion ended with output only slightly above potential, for both real GDP and NFB output. The experience differed markedly during the long expansions of the 1960s and 1980s, when output rose to levels 3–4% above potential. The close balance between actual and potential output in the mature stage of the expansion of 1991–2000 is consistent, of course, with the modest level of inflation of the period. The expansion of 1961–1969 substantially outpaced that of 1991–2000 in every aspect of real economic performance in both the NFB sector and the total economy and in both actual and potential growth. In 1961–1969 the rate of technical progress in the NFB sector was about twice that of 1991–2000, capital deepening was nearly 50% faster, and consequently FE productivity grew nearly two-thirds more rapidly than in the latter expansion. Despite the oil shocks during 1970–1981, FE productivity in non-farm business grew more rapidly than during the 1982–1990 expansion, owing to a faster rate of technical progress. Thus, the 1980s saw the smallest productivity gains, both actual and potential, in our entire historical period. With regard to the supply side of the labor market, we find that FE labor supply to the NFB sector grew at about the same rate on average in each of the first three decades of our sample, when declining working hours were offset by increases in labor force participation and other factors. FE NFB labor supply growth then slipped in 1991–1995, primarily due to a reallocation of labor away from the NFB sector; but it accelerated sharply in 1996–2000 as labor returned to the sector, population growth accelerated, and the natural employment rate increased. Because of sectoral shifts in employment, FE labor supply growth in the total economy was significantly slower than that in the NFB sector in 1961–1969 and 1991–2000. Along our full-employment path, capital deepening averaged 1.17% per annum in 1961–1969, declined to 50 basis points in 1970–1981 and 1982–1990, then rebounded to 70 basis points in 1991–1995 and 88 basis points in 1996–2000. Real wage growth was a substantial stimulus to capital deepening throughout the sample period and was especially important during the 1961–1969 expansion. Large decreases in the relative price of investment goods dominated the real wage effect beginning in the early eighties, however, owing principally to the rapid fall of semi-conductor and computer prices during those years. Increasing depreciation rates depressed deepening moderately between 1961 and 1995, but rather substantially in 1996–2000. Significant increases in deepening accompanied the liberalization of tax policy affecting investment decisions from the early sixties to the mid eighties, but subsequent tightening of depreciation rules and elimination of the tax credit for equipment investment led to small negative impacts through the mid-nineties.