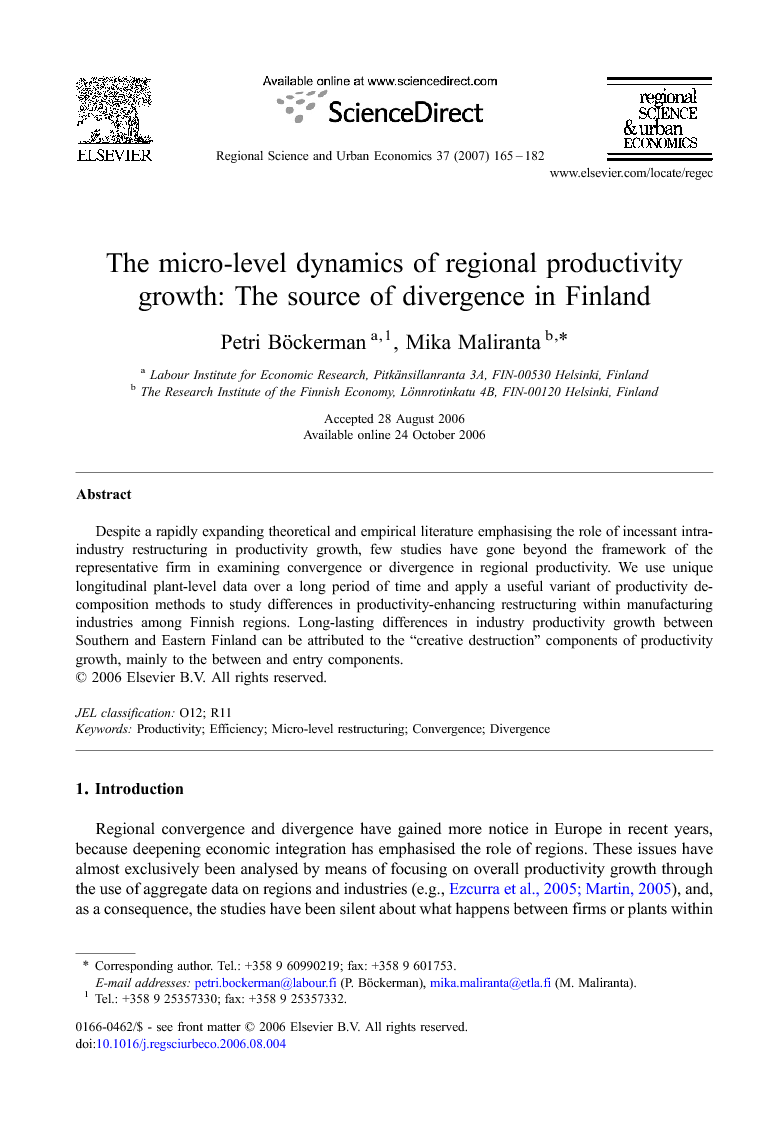 By using plant-level data, large regional differences in productivity levels in manufacturing industries were found. For instance, the level of total factor productivity is roughly 10% higher in the province of Uusimaa, which is located in Southern Finland, compared with Eastern and Northern Finland. In addition, productivity dispersion between plants was found to be larger in Uusimaa than in Eastern Finland. When evidence was found of differences in the heterogeneity of plants between regions, micro-level dynamics of industry productivity growth were analysed by means of a decomposition method. Importantly, there are no statistically significant regional disparities in the average rate of productivity growth for continuing plants. However, the productivity-enhancing reallocation of resources within industries has been substantially stronger in Uusimaa compared with Eastern Finland. The same finding is obtained, irrespective of alternative gauges, for creative destruction (the between or entry components) and alternative measures of productivity (labour productivity or TFP). Hence, Schumpeterian creative destruction characterizes the micro-level dynamics of productivity growth in Uusimaa, which is the richest region. This process has led to an overall and long-lasting regional productivity growth difference in Finland during the past few decades. Broadly speaking, the dynamic perspective on competition and efficiency appears to provide a suitable theoretical framework for understanding the prevailing regional disparities in productivity growth. The finding that productivity dispersion across plants within industries is higher in Southern Finland is in keeping with the perspective that dynamic competition is more intensive in Southern Finland. This might explain why plants use more productive equipment and methods in this high productivity region. In contrast, sluggishness in dynamic competition explains why plants are equipped with low productivity technologies in Eastern Finland. Arguably, the differences in regional restructuring and dynamic competition have been induced by more fundamental forces. By excluding some candidates for factors that could account for the substantial differences in regional performance, such as the differences in the quality of the labour force in the population of plants, we did come to the tentative conclusion that the high level of agglomeration and increasing exposure to international trade have most likely supported more intensive restructuring and dynamic competition in Southern Finland. The prevalence of these effects is in line with the theoretical literature on reallocation. An in-depth analysis of the factors underlying the mechanisms of incessant micro-structural change and hence the sources of regional productivity differences is an important avenue for future research. Comprehensive plant-level data will be an invaluable tool in such work.