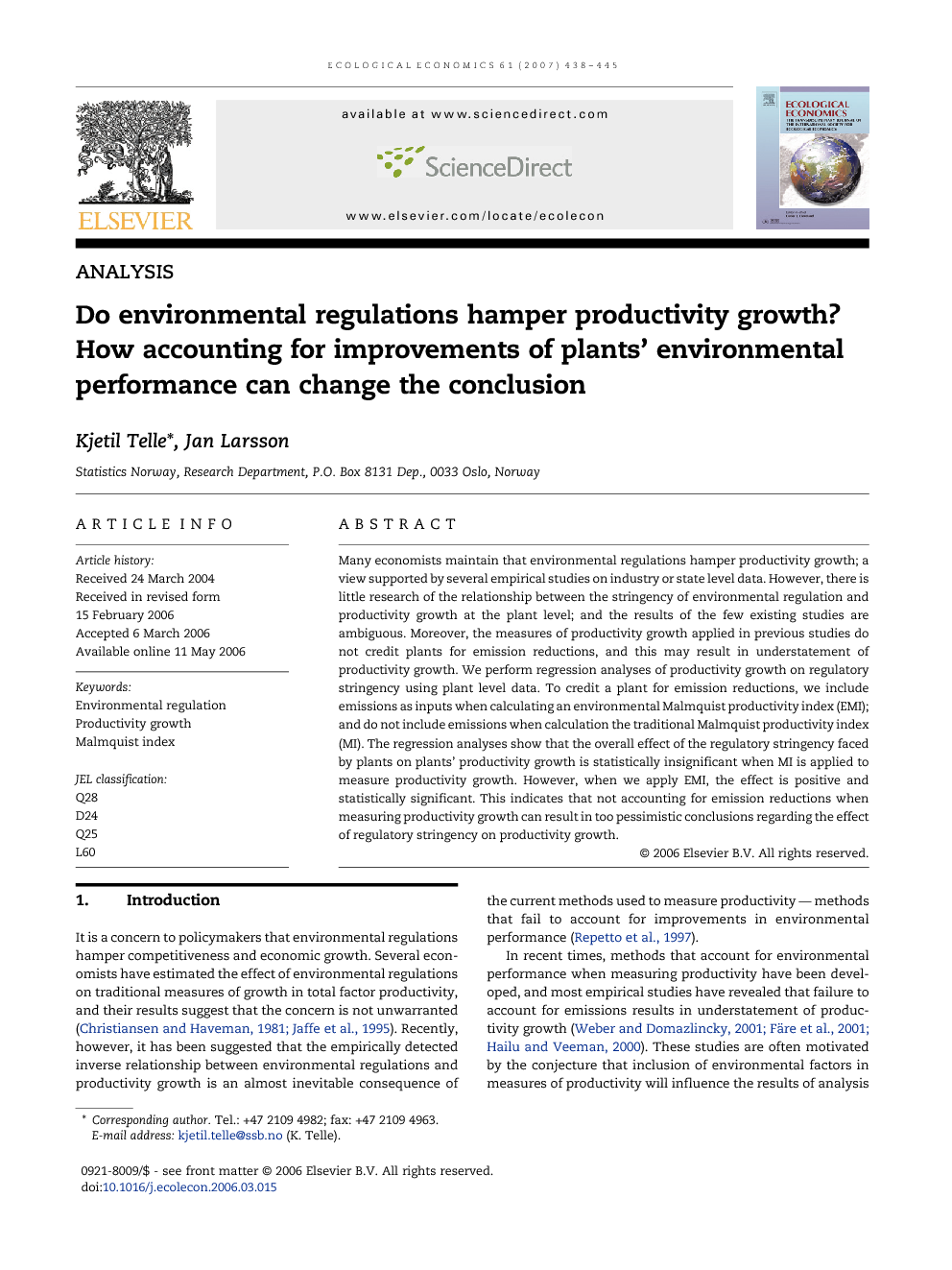 The present paper provides the first empirical support of a claim that evaluations or recommendations of environmental policies that are based on a traditional measure of total factor productivity can be misleading: When using a measure of productivity growth that accounts for emissions, we find a positive and significant relationship between regulatory stringency and productivity growth (EMI). However, we do not find a significant relationship between regulatory stringency and a traditional measure of productivity growth (MI). This paper has investigated one possible aspect of the costs of environmental regulations: reduced growth in total factor productivity. Contrary to what is traditionally claimed, our result indicates that environmental regulations have not reduced productivity growth when measured in a way that credits plants for emission reductions. When a firm allocates resources to abatement activities, this is conventionally believed to reduce productivity measured by ordinary outputs. However, over time the firm may accomplish the same amount of abatement by allocating fewer resources from ordinary production to abatement activities. The main point of the present paper is that this improvement in abatement technology should constitute one element of the firm's overall technical progress. We find that accounting for this element is sufficient to observe a positive relationship between productivity growth and regulatory stringency. Recently some authors have been arguing that environmental regulations can in fact improve the economic performance of firms, a stand often labeled the Porter Hypothesis (see e.g. Porter, 1991 and Porter and van der Linde, 1995). These authors propose several mechanisms to support a presence of such win–win-opportunities; like e.g. that regulations enhance motivation for innovations that improve competitiveness. Porter and van der Linde (1995), e.g., argue that even if environmental regulations were not profitable in the short run, they may improve competitiveness in the long-run. Since productivity growth is an important determinant of long-term competitiveness, many of the arguments supporting the Porter Hypothesis applies to our measures of productivity growth. However, there are a couple of reasons why our empirical results may not be interpreted as support for the Porter Hypothesis. First, we do not find a significant effect of regulatory stringency on MI. Second, and more importantly, while Porter and van der Linde (1995) focus on private costs when maintaining that regulations can improve competitiveness, we have considered a measure of productivity growth that incorporates emissions. This represents an extension of focus from inputs associated with pure private costs to environmentally detrimental inputs of concern to society. Along with others, we have argued that inclusion of environmental impacts of production is appropriate when policy evaluations of regulations are to be undertaken. It seems likely that the effect of regulatory stringency on productivity growth would depend on the specific features of the actual regulatory regime, and probably also on the technological and institutional characteristics of the industries studied. Complementing the present study with analyses on data sets covering other industries and regulatory regimes is obviously necessary before categorical conclusions regarding the relationship between regulatory stringency and productivity growth can be drawn. Still, we believe that the results based on our limited data set reveal some interesting patterns worth studying further as the availability of plant level panel data improves.